About 100 young people from different religious backgrounds have committed to build peace in Indonesia, where sectarian tensions are on the rise.

Their commitment was made at a "Young People Build Paths of Peace" program on Oct. 14 in the Jakarta compound of Atma Jaya Catholic University of Indonesia.

"We will lose nothing by taking part in dialogue," the statement stressed.

"We can become agents of peace."

Whoever used God's name in an attempt to justify terrorism, violence and war did not walk on God's path, the statement added.

Lia Istifadah, a 22-year-old Muslim woman from Nurul Ummahat Boarding School in Yogyakarta, promised to encourage her fellows to be more open-minded.

"I will tell my friends who seem to be conservative to open their minds to other religious teachings," she said.

"They just need to build mutual understanding and mutual respect." 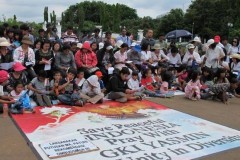 Saraswati, a 22-year-old adherent of Kapribaden from Depok, West Java, believes that influencing young people's way of thinking will be the main challenge.

Many still think their own religions are the best, she said, rather than accepting that all religions teach good values.

According to Sant' Egidio Community's coordinator Ignatius Respati Teguh Budiono, the program was organized by his community and the Indonesian Conference on Religion and Peace to boost the spirit of Assisi among young people.

St. Pope John Paul II coined the expression the "spirit of Assisi" on Oct. 27, 1986 at the World Day of Prayer for Peace during a meeting with religious leaders in Assisi, Italy.

"Sectarian tension is on the rise, and politics significantly contribute to it," Budiono said.

"Ethnic and religious issues are used and many young people have antipathy against others.

"This is very dangerous for the future." Baswedan was backed by radical Muslim groups, which held a series of sectarian rallies in the month leading up to the election.

Meanwhile, Ulil Abshar Abdalla, a Muslim scholar, said each religion has the potential to build peace or spread hatred.

"We now live in a world where 'dark forces' use religion to mobilize people who hate others," he said.