Youngsters rally for an end to India's child labor 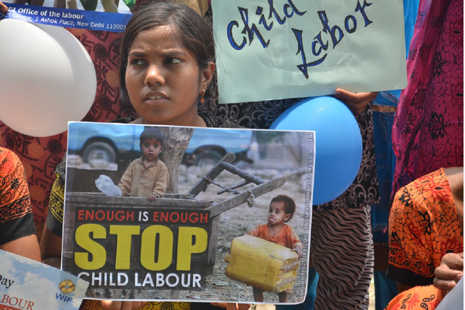 Rallies and seminars marked World Child Labor Day in India today, with demands to end the practice that afflicts as many as five million children in the country.

Around 50 children gathered at the India Gate in New Delhi holding placards and shouting slogans, while some 3,000 children took part in a ‘Run Against Child Labor’ in Ranchi, eastern India. Similar events took place in Bangalore.

“We have gathered to protest against child labor which is a common sight in the country,” said 17-year-old Anjali at the New Delhi protest. “People have to take the initiative from their houses as many of them employ children as domestic workers.”

She said that the evil affects the growth of children physically, mentally and emotionally. “Child development is necessary for the country’s development,” she added.

The children at India Gate were part of the national campaign against child labor launched by the labor commission of the Catholic Bishops’ Conference of India.

“Education is the foremost right of a child,” said Father Rajan Punnakal, who organized the Delhi protest. “We can fight a lot of social evils by educating children as most of the criminals and abused children come from the uneducated section of society.”

The majority of India’s five million child laborers are brought from poor and under developed states to metropolitan cities like Delhi and Mumbai to work in factories, roadside eateries and as domestic workers.

According to the statistics provided by the National Sample Survey Organization, the largest share of child laborers comes from the north Indian state of Uttarakhand (over 1.7 million) followed by 550,000 from West Bengal, over 400,000 from Rajasthan and around 390,000 from the state of Gujarat.

“I was forced to work in an eatery by my father two years ago to support the family financially. They made me wash utensils. I did not like the job and wanted to study,” said Ravi, a 12-year-boy who is now enrolled in a school and has left the work he was doing.

Several laws have been passed on child labor in the country, notably the Child Labor (Prohibition and Regulation) Act of 1986 which prohibits employment of children below the age of 14 years in hazardous occupations.

Despite that and several other related laws, little has been done to actively tackle the problem, says Fr Punnakal.

“There is a need to rehabilitate those children who are rescued from child labor. The government should promote non-formal education as a basis for formal education.”