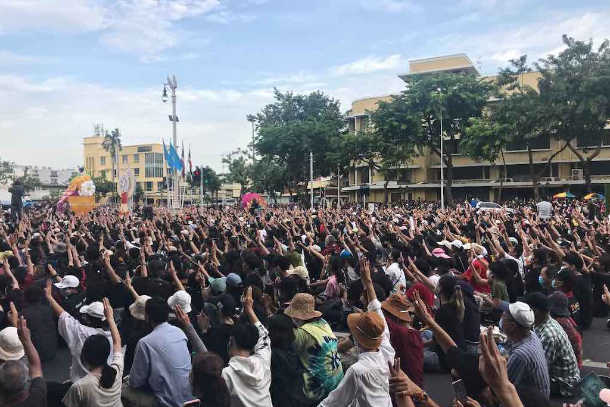 Young demonstrators gathered on Aug. 18 in Bangkok reproduce the three-fingered 'Hunger Games' salute as a sign of protest against dictatorship.

Thousands of young people are on the streets of Thailand demanding reform of the country's governing systems. Demonstrations are taking place all over Thailand — in the capital, provinces, universities and high schools.

Although physically scattered, the demonstrators stand united in their "three demands and a dream." They demand the dissolution of parliament, a new constitution and an end to threats against the people alongside the monarchy's reform.

"Enough is enough!" proclaimed a leader at a massive rally attended by some 10,000 people on Aug. 16. His words represent the growing exasperation of young people in the face of dictatorship, corruption and injustice. The words were also expressions of hope to put the country back on track and restore human dignity.

"Let it end with our generation" has been a trending hashtag on Twitter among young pro-democracy activists for some time. Tim (all names changed), a fourth-year Catholic student, said he supports the movement because "we cannot remain silent in the face of the current situation. We have to defend our rights and freedoms." If young people fail to work for a change, "our sorrows and sufferings will remain hidden behind masks while political repression continues. For some time now, we have seen dysfunctional government and its disastrous consequences in the country." Three young practicing Catholics, when asked about the reasons for their involvement in the political sphere, said it was impossible to escape politics.

Frank, from the student chaplaincy, asserts that everything is political. "We are all, in some way, concerned about politics, regardless of our age or profession. It comes to us," he said.

Another Catholic added: "We [Thai government] approved a budget to buy submarines at a time when we're amid a bad health and economic crisis. It makes us think a lot. Do we need them?" Several Thai politicians denounce the opponents as unpatriotic, but Frank said that people like him "don't hate our country" as many older people claim. "We're looking for a fair and lasting solution for Thailand to break out of the vicious cycle: a corrupt government, military intervention through a coup d 'état, and a new election that will elect corrupters again," he said.

The cry of the poor, oppressed

"We don't want a revolution. We want reform. We don't want to demolish the monarchy as was done in France. We want the king to reign us by and under the constitution," says Jib, a 20-year-old student.

Some people project these demonstrations not simply as movements against the government but also as against the monarchy, a taboo subject that no one dared to discuss openly.

In recent years, social networks have sharpened many students' curiosity on the subject. On Facebook, they follow exiled academics such as Somsak Jeamteeras and Andrew MacGregor Marshall. Such academics present information about the monarchy that is not published in Thailand.

Royalist Marketplace, a Facebook group launched by Pavin Chachavalpongpun, a Thai academic exiled in Japan, has become a space for discussion on the monarchy for people of all ages. It inspired discussion on a real democracy within a constitutional monarchy. Authorities blocked the Facebook group, but another one soon took its place. Jib, a Catholic, said his religion teaches people to love, share and help others for the common good. "We speak out because it can help the world hear the cry of the poor, the oppressed, or those who are forgotten because of the current unjust system."  His companion said most people with some social status remain silent. "They have to respect the orders of their superiors, even if some of them support us," he said. Frank does not hesitate to express what he expects from the Church. "I would like the Church to make a concrete commitment and join us. The government has no dignity. And that is exhibited in the series of unexplained disappearances, threats and arrests of pro-democracy activists. Today's youth believe in actions, not just words. Pope Francis promotes the culture of tolerance and asks to respect differences." The Thai Church, he said, must practice what it teaches. However, he can understand the Church's dilemma. "On the one hand, Catholics are few, and the regime can threaten them at any time. On the other hand, the Thai Church is close to the monarchy." King Rama IV and Bishop Jean-Baptiste Pallegoix (1805–62) of Siam were terrific friends. "It does not surprise me if the Church remains silent," he said. Thailand has some 380,000 Catholics, forming roughly half a percent of some 69 million, mostly Buddhist people in the country. French missionaries who arrived in Siam in the 16th century introduced Christianity.