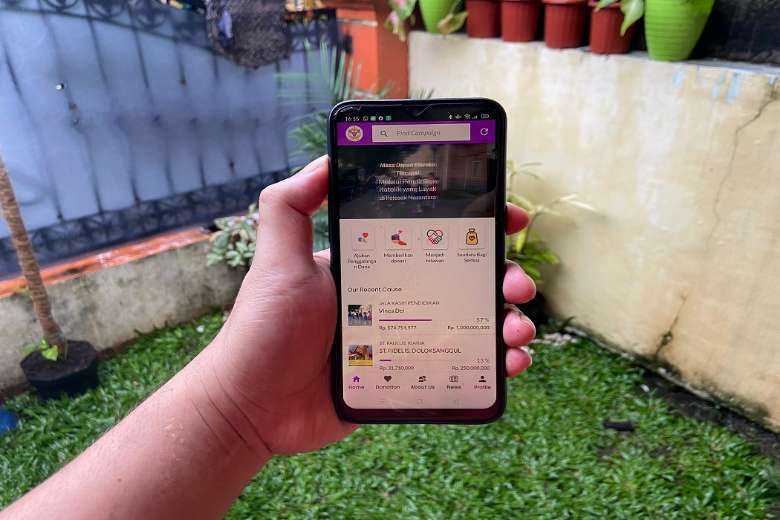 Indonesia's crowdfunding Vinea Dei Foundation has launched a mobile application to make donations easier as part of a plan to increase the scope of their services. (Photo: Ryan Dagur/UCA News)

A crowdfunding group run by young Indonesian Catholics that has helped build more than 100 churches in remote areas has launched a mobile app to make donations easier and more transparent as part of a plan to increase the scope of their services.

The application enables people to make donations directly to a specific project at the touch of a button and keeps people informed about the project’s progress.

"With this application, donors can easily share and monitor the projects they help,” said Albertus Gregory Tan, the group’s founder.

It was also part of preparations to expand services from not only building churches and providing scholarships for poor children but also to help fund health care, charitable social work and economic empowerment.

"We are currently preparing a scheme to help hospitals, orphanages and other services provided by the Catholic Church," he told UCA News.

"For economic empowerment, we will work with the Socio-Economic Empowerment Commission in various dioceses," he added.

Father Sesarius Gelede Liwun, parish priest at Stella Maris Tarempa Church in Pangkalpinang Diocese, who asked for the group’s help to build a chapel, welcomed the new app. "Hopefully this will make it easier to assist churches.”

He said he asked the group for help because 500 Catholics, mostly fisherman on Mengkait, a small island north of Sumatra, were unable to build their chapel for years.

"The cost is quite large because building materials must be brought to the island. We hope that with this application, the target can be reached soon,” he said.

Dewi Ekawati, who sent money for the chapel from St. Peter and Paul Pangkalan Bun Parish in Palangka Raya Diocese, Central Kalimantan, said the app improves the way donations can be made.

“Previously, I had to find an ATM machine. Now I can donate from anywhere via the app,” she said, adding that it was also easier to check on the progress of the chapel via regular updates.

“I admire these extraordinary young Catholics ... They helped channel my desire to help fellow Catholics in other areas," she added.

The Vinea Dei Foundation was established in 2017 after Tan helped raise funds to renovate an old church in North Sumatra province.

Run by 38 young Catholics, it has helped build 120 churches across Indonesia. It also helped provide scholarships for 30 children from poor families.

Tan said they had already collected around $3.5 million from 10,000 donors.