Timor-Leste paid tribute to independence heroes on the 30th anniversary of the Santa Cruz massacre. In other parts of Asia, there were stories of triumphs and struggles against oppression and injustice.

Hundreds of young people in Timor-Leste paid tribute to victims on the 30th anniversary of the Santa Cruz massacre. They gathered at Santa Cruz cemetery on November 12 in capital Dili.

The nearby Church of Saint Anthony Motael offered a special Mass to pay homage to the freedom fighters. President Francisco Guterres called on young people not to forget the heroes who fought selflessly and shed blood for the country's independence.

The Santa Cruz massacre was a tragic turning point in Timor-Leste's struggle for independence from Indonesia. The tragedy occurred when more than 2,000 people went to the Santa Cruz cemetery to pay homage to slain young activist Sebastião Gomes.

The Indonesian military opened fire, killing 74 people on the spot. Most victims were young people. More than 120 died later in hospital or due to persecution by the occupying forces. Catholics in the eastern Indian state of Odisha have welcomed a new priest from the most persecuted Christian village in the country.

Father Vikash Nayak, 29, was ordained a priest on November 6 by retired Archbishop William D’Souza of Patna Diocese in the neighboring state of Bihar. Father Nayak visited his home village of Tiangia in Kandhamal district of Odisha on November 13 and celebrated his first Eucharist with local people with much joy and happiness. A Christian family’s house after being burned down by Hindu activists in Lodamila village of Odisha’s Kandhamal district on Sept. 22, 2021. The district witnessed India's worst anti-Christian violence in 2008. (Photo supplied)

The village was among the worst-hit areas during anti-Christian violence in 2008. Seven Christian villagers including a Catholic priest were murdered. Christians came under violent attacks after a leader of radical Hindu group Vishwa Hindu Parishad was shot dead by Maoist rebels.

Hindu extremists termed the murder a “Christian conspiracy” and unleashed a reign of terror against the minority community. In the following seven weeks, the violence left 100 people dead and about 56,000 injured and homeless, while 6,000 houses and 300 churches were destroyed.

The Cambodian government has granted temporary accommodation to 15 refugees and their families from Afghanistan who fled their homes following the US withdrawal and Taliban takeover of their country in August.

Government-friendly Fresh News reported that all the refugees are employed by the Asia Foundation, a US-based development agency. The refugees will enjoy temporary accommodation before they are granted asylum by a third country. An Afghan refugee holds a sign during a protest to highlight their status as asylum seekers in the Indonesian city of Surabaya on Nov. 11. (Photo: Juni Kriswanto/AFP)

The acceptance of refugees followed an agreement between the Cambodian government and the Asia Foundation three months ago to enable 300 Afghan asylum seekers to transit through Cambodia amid an appeal from United Nations high commissioner for refugees.

The UN has warned that up to half a million Afghans could flee the war-torn country by the end of this year on top of the 2.2 million refugees already living in neighboring countries. About 3.5 million Afghans have been displaced internally amid the Taliban advance.

Some 200 Catholic priests in Indonesia’s restive Papua province have appealed to the international community including the United Nations for active interventions to bring peace to the violence-plagued region.

Besides diocesan clergy, Franciscan, Augustinian, Jesuit and Missionaries of the Sacred Heart priests issued a statement with an urgent appeal for peace in the Christian-majority easternmost province. It came amid an escalation in violence in Papua in recent times. Thousands have died and tens of thousands have been displaced in Papua in the long-running armed pro-independence insurgency and retaliatory actions from security forces.

Pakistan’s National Commission for Minorities has accepted the resignation of Archbishop Sebastian Shaw of Lahore more than a year after the Catholic prelate decided to quit. The commission announced on Monday that the prelate had resigned due to his busy schedule.

However, Archbishop Shaw said he was not clear about the authority of the body. He also noted that some rights activists had described the commission as “toothless and powerless” and some comments also targeted him. Archbishop Sebastian Shaw of Lahore has resigned from the National Commission for Minorities. (Photo supplied)

Commission members complained that it couldn’t function properly as it was without a budget and powers to act even after two decades.

Myanmar’s military junta has charged ousted civilian leader Aung Saan Suu Kyi with committing fraud during the 2020 election in the latest of a series of charges against her. The 76-year-old has been in detention since her arrest following the military coup in February.

The leader of the dethroned NLD government faces multiple other charges including illegally importing walkie talkies, sedition and corruption. If convicted, she faces decades in jail. Fifteen other NLD officials, including former president Win Myint and the former chairman of the election commission, face the same charges. Suu Kyi’s NLD government came under fire from the military after it won a landslide victory in 2020 election against the military-backed party.

Since the military takeover, more than 1,200 people have been killed and thousands have been arrested amid nationwide anti-coup protests. The military’s fierce fighting with ethnic rebels has seen churches targeted, damaged and Christians killed.

A Catholic priest in Sri Lanka has faced police interrogation for his remarks that the country’s intelligence services assisted an Islamic extremist group to carry out the 2019 Easter Sunday attacks.

The Criminal Investigation Department questioned Father Cyril Gamini for about seven hours on Monday over a complaint lodged by Major General Suresh Sallay, director of the State Intelligence Service. Sallay had complained that Father Gamini told an online forum on October 23 that the country's intelligence units had provided financial and other forms of assistance to National Thowheed Jamath. The extremist group carried out the suicide bombings of three churches and three hotels that killed at least 269 people including Buddhists and injured over 500. The government has concluded a probe while dozens of have been arrested.

Catholic bishops have repeatedly questioned the government's sincerity in its investigations and criticized the failure to find the masterminds and motive behind the terrorist atrocity.

A prominent South Korean filmmaker has announced the making of a biographical film on the life and works of Andrew Kim Tae-gon, the first Catholic priest of Korea who was martyred for his faith in the 19th century. The upcoming film called A Birth is a tribute to Saint Andrew Kim on his 200th birth anniversary.

Director Park Heung-sik said the film is expected to hit theaters in November next year, adding that he has undertaken extensive research on the life and legacy of the famed priest. 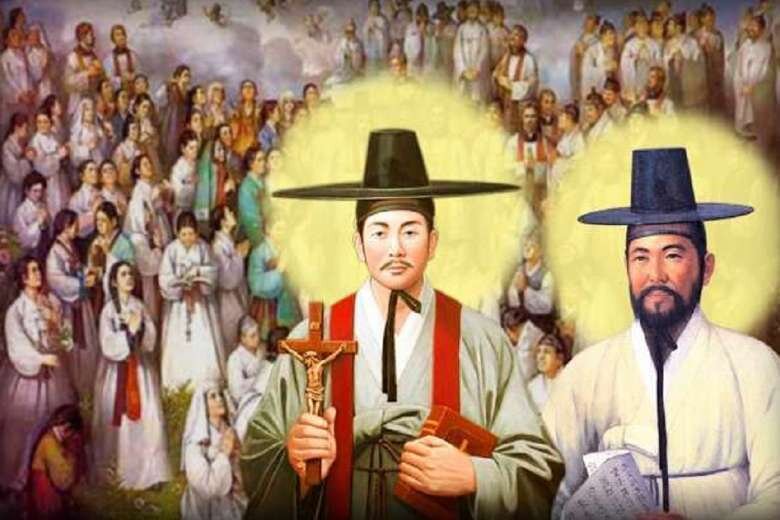 Born in 1821, Andrew Kim was baptized at the age of 15. He studied in a seminary in Macau and was ordained a priest in Beijing. He helped Western missionaries to enter Korea secretly when Buddhist rulers brutally persecuted Christians.

He was arrested, tortured and beheaded near the Han River near Seoul in 1846 at the age of 25. Pope John Paul II declared him a saint in 1984.