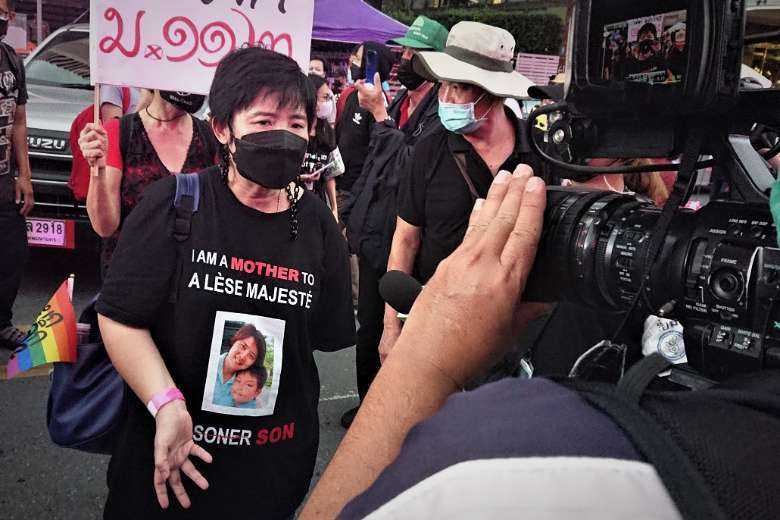 A woman whose son has been charged with royal defamation speaks to reporters during a street demonstration in Bangkok on Oct. 31. (Photo: UCA News)

Even as Thais have been taking to the streets to demand the abolition of the country’s controversial lese majeste law, another youngster has been indicted with royal defamation.

Noppasin Treelayapewat, who is only 16 and therefore a minor, has just been charged with royal defamation for participating in a lighthearted fashion show staged by students on the street during a pro-democracy protest in Bangkok in October last year.

During the fashion show young participants, including high school students, appeared to mock Princess Sirivannavari, a daughter of King Vajiralongkorn, who is a noted fashion designer with her own clothing brand.

Noppasin wore a black crop top, allegedly in order to mock the king, who had been photographed wearing a similar outfit during a trip to Germany.

The teenager also had a message written on his back with a marker that said: “My father’s name is Mana and not Vajiralongkorn.”

Another participant in the street show, a 23-year-old transgender activist, was charged in July with lese majeste for wearing a traditional pink dress allegedly in imitation of Queen Suthida.

We live under a regime that will imprison even children for saying the wrong things. But at least people can see what we [protesters] are up against

If convicted, the two pro-democracy activists could face up to 15 years in prison according to Article 112 of the Criminal Code, which effectively prohibits any criticism or mockery of the royal family or the monarchy as an institution in Thailand. Both have denied the charge of insulting the monarchy.

At least 154 predominantly young Thais have over the past year been charged with royal defamation, some of them numerous times, which means they could face up to 15 years in prison on each count, according to Thai Lawyers for Human Rights.

Among those indicted have been several children, with Noppasin being the latest victim in what rights activists say is a clear violation of their rights as children.

“Thai authorities should immediately and unconditionally drop insulting the monarchy and other politically motivated charges against children who peacefully express their opinions,” Human Rights Watch said in a statement.

“By punishing outspoken children with lese majeste charges, the Thai authorities are seeking to intimidate peaceful critics by demonstrating that they will all be harshly punished regardless of their age. These senseless, rights-abusing charges should immediately be dropped,” Adams said.

In an interview with UCA News, a young Thai pro-democracy activist likewise condemned the authorities for prosecuting children and others for simply expressing their opinions.

“We live under a regime that will imprison even children for saying the wrong things,” said the activist, who studies at a prominent university in Bangkok and won’t be named to protect them from possible repercussions. “But at least people can see what we [protesters] are up against.”

Since youth-led street protests erupted in Bangkok and elsewhere in June last year, protesters have been calling for sweeping democratic reforms, including the resignation of the military-allied government, whose head, Prime Minister Prayut Chan-o-cha, seized power in a coup in 2014.

More controversially in a country where the monarchy is officially portrayed as universally beloved, student protesters have also been demanding the imposition of new constitutional limits on the influence of the institution.

In response to such calls, Thai authorities have stepped up their efforts to prosecute student leaders, protesters and others on charges of royal defamation, sedition and other crimes.