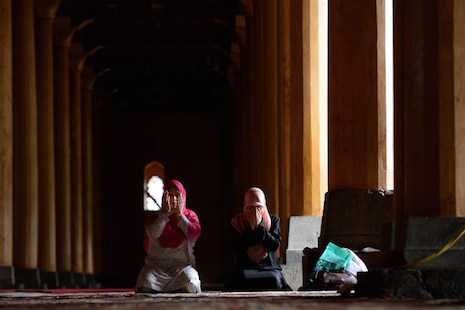 Kashmiri Muslim women pray inside a mosque in Srinagar on June 25. A recent study showed an increase in the number of women seeking help for psychiatric problems in Kashmir. (Photo by Tauseef Mustafa/AFP)

For the past 10 years, 43-year-old Haleema has been a regular patient at Kashmir’s only psychiatric hospital.

She was seven months pregnant when her husband left for Pakistan to become a "freedom fighter." But he was killed soon after his return in a clash with security forces.

Haleema was left widowed with a baby boy to raise. But soon after her husband’s death she began complaining of sleeplessness and started behaving very oddly, her brother Mohammad Shafi Khan told ucanews.com.

"She kept saying that her husband often visited her. Initially we thought she was possessed by some evil spirit," Khan said.

When prayers failed to help, the family took her to the psychiatric hospital in the state capital, Srinagar, where Haleema was diagnosed with having post-traumatic stress disorder, or PTSD, he said.

"My agony is that I never saw my husband’s body. He was killed near the border and buried almost immediately. I only learned of his death several months after he was killed," Haleema said.

"Now, I have a son who keeps asking me about his father and I don’t know what to tell him."

Two decades of violence in Jammu and Kashmir waged by separatists seeking to end Indian rule in the country’s only Muslim-majority state have killed at least 43,000 people, according to government figures.

The majority of those killed were husbands, sons and fathers.

Their deaths have resulted in many more victims — the loved ones they left behind.

For many women like Haleema, the loss of husbands, sons and fathers has left a major psychological impact. This has resulted in a steady increase in the number of people, especially women, seeking psychiatric treatment.

A recent University of Kashmir study revealed about 700 women were treated for psychological disorders in 1985 before the violence erupted. By 2013, that number had shot up to 100,000.

According to statistics compiled by Srinagar’s Psychiatric Diseases Hospital, some 15 percent of women in Kashmir suffer from stress or some kind of prolonged trauma.

Psychiatrist Mushtaq Margoob says many women are suffering from an acute sense of insecurity after having lost loved ones.

"The trauma can be seen on their faces. Women continue to bear the brunt of this conflict of attrition. The traumatic experience of violence can have long-lasting and deep-rooted psychological consequences," Margoob said.

Nasreena, 61, is still struggling to come to terms with the loss of her only son nearly a decade ago.

He joined a separatist group in 2005 and was killed two years later. Ever since then, Nasreena often locks herself in a room and starts screaming and sobbing loudly.

"It was a shock for her to see the body of her 19-year-old son. She never even tried to reconcile with that incident. During the initial days, she kept staring at a picture of her son," said her husband, Ghulam Qadir.

He said Nasreena has been getting treatment for acute depression for the past eight years. The majority of widows in Kashmir live a miserable life as the government and other agencies do not pay them adequate attention, says Asima Hassan, who has conducted research on the impact the Kashmir conflict has had on people in the state.

"An ever-increasing number of widows has been one of the byproducts of the armed conflict in Kashmir. Many women witness the worst socioeconomic conditions as the only family breadwinners have either been killed, injured or have mysteriously disappeared," she added.

Asha Begum became a PTSD victim after her husband, a tourist guide, "disappeared" 18 years ago.

"I have three daughters. We have little money and we are struggling to survive," Begum said.

"I really want to die as there is no purpose in this world," Begum said as she waited at the psychiatric hospital.

She needs to take medication regularly, but doesn't have enough money to buy medicine, she said.

Arshad Hussain, a prominent psychiatrist in Kashmir, says even after a decrease in violence in recent years, the number of people suffering from mental illnesses continues to rise.

"People are increasingly seeking medical treatment to recover. Before, mental illnesses were stigmatized here, particularly among women, and usually it was kept hidden," Hussain said.

Rahti Begum’s son was killed by militants 12 years ago.

"They fired several bullets into his chest. My son died before my eyes and I could not save him," Rahti said. Her other two children also witnessed the brutal killing and are on medication now.

"I fainted and when I regained consciousness. Hundreds of people were in my house. The moment my son died will never be erased from my memory," Begum said.

As the state has no comprehensive program to help such people, nongovernmental organizations like ActionAid India have stepped in.   Tanveer Ahmad, project manager for ActionAid in Kashmir, told ucanews.com that the formation of village level committees is an integral part of a project that is acting as a catalyst of change at the community level.  Workshops are organized to raise awareness on various psychosocial issues, he said.

"Such programs not only help generate income for those suffering stress and poverty, but also work as an occupational therapy, enabling them cope with their mental issues and develop social dignity with a sense of empowerment," Tanveer said.