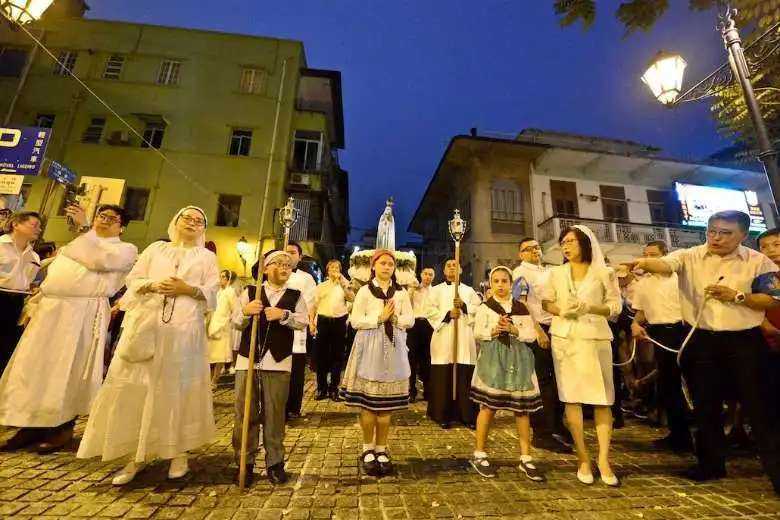 Catholics in Macau participate in a procession to honor Mother Mary in this file photo. (Photo: Jornal O Clarim)

The Macau Diocese has launched a series of activities to strengthen marriage and family life for local Catholics in the former Portuguese colony to observe the “Year of the Family” declared by Pope Francis.

Among the major activities are family workshops, a study seminar on the history of the Church in Macau, a basketball competition between teams of parents and children, and a charity sale of face marks to raise funds for various church-run projects, reports the Vatican’s Fides news agency.

In March, the diocese organized a family gathering when a photo exhibition on the spirit of Pope Francis’ famed apostolic exhortation on marriage and family life, Amoris Laetitia (The Joy of Love).

Bishop Stephen Lee of Macau said he has prioritized contemplating the life and role of St. Joseph in the Holy Family of Nazareth for the local church during the year.

On the fifth anniversary of the publication of Amoris Laetitia, Pope Francis established the Year of the Family, on March 19, 2021, the Solemnity of St. Joseph.

The pope said through the Year of the Family he seeks to help Catholics to strengthen their faith and live God’s joy more fruitfully in family life.

The Year of the Family will end on June 26, 2022, at the 10thWorld Meeting of Families in Rome to be attended by Pope Francis.

Macau is a special administrative region of China that was under Portuguese rule from 1557 to 1999. It is often dubbed the “Las Vegas of the East” for its huge gaming and gambling industry.

Catholicism in Macau dates to more than 400 years, starting during the Portuguese period. For centuries Macau was the gateway for foreign missionaries and traders entering mainland China.

When the Vatican created Macau Diocese in 1676, it became the first Catholic diocese in the Far East, covering a vast territory from Japan to Southeast Asia. Since then, more than 100 dioceses have been carved out from Macau Diocese.

Macau Island has an estimated population of 700,000 including 30,000 Catholics spread in nine parishes.