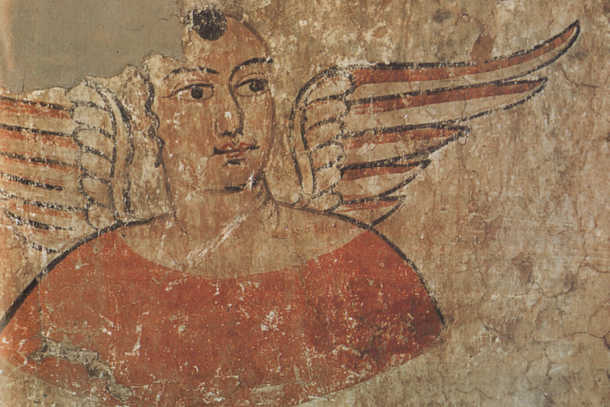 A winged male figure from the third century shows Hellenistic influence. The mural painting is signed Tita and was found at the Loulan site of Miran in the eastern Tarim Basin of present-day Xinjiang. (Photo from Wikimedia Commons)

This is the first article of a nine-part series on the Chinese region of Xinjiang, where in its southern part Uyghurs and other Turkic Muslims are in the majority.

They have since ancient times been subjected to racism and colonialism, but since President Xi Jinping’s ascension to power this has accelerated into an ethnocide that has brought a call for independence.

The Chinese Communist Party (CCP) has detained between one and three million Uyghurs and other Turkic Muslims for “re-education” that includes torture, rape and political indoctrination. All 12 million Turkic Muslims in Xinjiang are living in a highly militarized “open air prison” in which their cultural, linguistic and religious identities are being erased by the government.

The CCP’s repression of Uyghur and other Turkic Muslims in the northwest region of Xinjiang, the most sophisticated and thorough ethnocide in world history, is part of a process of political competition and commerce-driven Chinese expansion and state-building that extends back to the third century B.C. when evidence of Chinese Han trade was left in the Tarim Basin in present-day Xinjiang.

This was the center of the ancient Silk Road or Soghdian network linking Chinese, Mongolian, Korean, Indian, Iranian and Turkic-speaking peoples. The Soghdians were an Iranian-speaking people that dominated trade along the Silk Road for long periods in ancient history, according to historian James Millward, from present-day Istanbul to Korea.

Examining the broad sweep of Xinjiang’s history shows just how brutal and tenuous is China’s claim over Xinjiang, most conclusively because the People’s Republic of China (PRC) has little support among Turkic Muslims, the majority of people in southern Xinjiang today.

The PRC claims that Xinjiang, much of which is desert and plain, has been part of China since 60 B.C., but historians point out that it only became Chinese-speaking in the 20th century.

Until the 18th century, it was divided and redivided by an overlapping patchwork of tiny oasis rulers, warlords and empires, including Europoid, Mongolian, Tibetan, Chinese and Iranian peoples.

The pastures of northern Xinjiang allowed nomads emanating from Mongolia, including the Uyghurs, to dominate both southern Xinjiang (the Tarim Basin) and areas to the west that include today’s Uzbekistan, Kyrgyzstan and Tajikistan. Oasis farmers around the Tarim Basin provided grain and tribute to nomad traders and rulers in the north as well as access to east-west trading routes.

Han Chinese cultural influence and settlements are present in southern and eastern Xinjiang, dating from the third century B.C. to the second century A.D. The Han were in a long military struggle over the northwest of China with Mongols, Iranian speakers and local populations that sometimes allied, and sometimes fought, with each other.

After 60 B.C., the Han replaced a Mongol administrator with a Chinese protector general and began to establish military agricultural colonies, a practice that continues today under PRC auspices. The Han expelled Mongols to northern Xinjiang (Zungharia) and bullied city states into paying tribute to the Han capital in the east. In the process, the Han conquerors decapitated thousands in the Western Regions.

Xinjiang of the Uyghurs

Han rule over Xinjiang was broken up by retreats, competing empires and re-emergent city states. The language of the Kushan empire, centered on today’s border between Afghanistan and Uzbekistan, was East Iranian in a Greek script. A third-century mural in the eastern Tarim Basin shows a winged man with Hellenistic influence.

Kushan exerted influence in parts of southern Xinjiang (the Tarim Basin) in the second century and facilitated the introduction of Buddhism and Zoroastrianism to China. Evidence was found of extensive Iranian-language settlement and trade by elites, farmers and artisans, all the way to Korea.

“The impression that all Xinjiang was Chinese territory throughout the Han dynasty is a distortion arising from later historians’ emphasis on certain aspects of this mixed record,” writes historian Millward.

After 560, a new Mongolian empire, the Kok Turks, took power. Modern Turkey points to the Kok Turks as ancestors, and the inhabitants of current Xinjiang are “Turkic” because of their origins with the Kok Turks. China's Sui dynasty (581-618) encouraged factionalism in the Kok Turk empire and was able to wrest a foothold away from the Kok Turks in eastern Xinjiang and the southern Tarim Basin.

The Tang dynasty (618-906) continued the policies of the Sui, but Tang elites were themselves intermarried and highly influenced by Turkic Mongols from the north, to the point of preference for a Turkic language over Chinese. The Tang used this cosmopolitanism and an alliance with the eastern Turks to split off and weaken the western Turks, asserting control over the Soghdian trading routes of the Tarim Basin in the process.

A similar process is arguably happening today, when Mongolia (the eastern Turks) is relatively quiet about the repression of the Uyghurs (the western Turks) because of its dependence on China for an alliance, this time of trade.

The Tibetans entered and captured southern Xinjiang in 670 through the western back door with the help of Bhutanese troops. They drove the Tang off and captured the trade route. The Tang defeated the Tibetans in 693, re-entering Tarim and consolidating power over all of Xinjiang in the 730s.

The Chinese have so subdued the Tibetans today that they will not be marching into Xinjiang anytime soon. Both regions are under tight control by the Han Chinese-dominated Chinese Communist Party (CCP).

In the 740s, the Tang dynasty ruled three frontier provinces in the northeast through An Lushan, a man of Soghdian and Turkic origins. An Lushan was China’s most powerful general and well integrated into court life in the capital. After a power transition in 755, a rival sought to unseat him. Instead, he obtained support from Soghdian traders and turned his armies victoriously against the Tang capital, declaring a new dynasty that lasted only six years.

The Uyghurs, then of northern Mongolia, helped to defeat him. He became a hero to some, but his example as a non-Chinese military commander turning against the emperor struck fear into the cosmopolitan Tang dynasty, which in its second half turned xenophobic.

By the end of the eighth century, the Tibetans had reconquered southern Tarim and were contesting the east. Northern and western Xinjiang were taken by the Qarluqs, formerly under Eastern Turk rule. China would not gain power over Xinjiang again until about 1,000 years later.

Between the ninth and the 16th centuries, the Tarim Basin of southern Xinjiang became Islamic and linguistically more Turko-Mongolian.

The Uyghurs were originally nomads from the Orkhon River valley of northern Mongolia. They were formerly of the Turk Khaganate of Mongolia and had Mongoloid facial features rather than the Iranian features of the then inhabitants of the Tarim Basin. After the Uyghurs conquered eastern Tarim, they intermarried with other Turkic migrants and locals of eastern Iranian stock.

Instead of adopting Chinese ways, the Uyghurs adopted systematized Manichaeism and administrative skills from the Soghdians. The Eastern Turks had been co-opted by the Tang, and historian James Millward suggests it might have been to avoid a repeat of that mistake.

“The memory of how the Eastern Turks had been co-opted and incorporated by the Tang was no doubt still fresh; indeed, the Turk khaghan Kul Tegin had only 30 years earlier carved into his memorial stone in the Orkhon valley an explicit caution to the Turk people not to be co-opted by the southerners,” he wrote. “Beware the ‘sweet words and soft materials’ of the Chinese … It was a warning the Uyghurs heeded.”

In 984, a Chinese envoy noted that there were over 50 Buddhist temples in the independent Qocho Uyghur state, plus one Manichaean temple with Persian monks. “In this land there are no poor people; anyone short of food is given public aid,” he wrote. “People live to an advanced age, generally over 100 years. No one dies young.”

Tomorrow: Xinjiang: The coming of Islam and China’s divide-and-conquer strategy