One Belt, One Road initiative has parallels with Qing colonialism in the 18th century In the Dzungar Genocide of the 1750s, the Manchu Qing empire killed up to one million Buddhists in Zungharia, the north of present-day Xinjiang, and repopulated it with Han Chinese and other migrants, including Chinese Muslims (Tungans). The Qing celebrated the victory over Zungharia with a series of drawings and etchings, including this one of the Massacre of Oroi-Jalatu in 1756, in which General Zhao Hui attacked at night in present-day Wusu. This is a Parisian etching commissioned by the Qing and executed by Jacques Philippe Le Bas in 1770 from an original less detailed drawing done between 1765 and 1769 in China. (Image from Metropolitan Museum of Art)

The syncretism of the Manichaean Uyghurs in early Xinjiang was consistent with their toleration of Buddhism, Zoroastrianism and Christianity. But they gave no succour to Islam.

That changed around 1000 A.D. when the Turkic empire in Xinjiang’s Kashgar (the Qarakhanids) started to convert to Islam, in part because of increased trade by Muslim merchants along the Silk Road. The Qarakhanids then conquered much of Muslim central Asia (Transoxiana) in 1000 to become the first Turkic rulers of the Islamic world.

Turkic Islamic practice was then of a moderate Sufi variety, including celebration, chants, dance and song, compared to the stricter Wahhabist or Salafist versions of Islam that proliferated in Xinjiang after the 1970s.

Another Mongolian power, the Qara Khitay of northern China, took over the Qarakhanid empire by 1142. They too were tolerant, including towards Christianity, Judaism and Islam, though the Muslims saw the Qara Khitay Buddhists as infidels. By the end of the century, the Qara Khitay were exploiting the population, causing unrest in Xinjiang and Transoxiana. In 1209, the Qocho Uyghurs beheaded their Qara Khitay supervisor and allied with Genghis Khan. The leader of the Qocho married one of Genghis Khan’s daughters as a result.

As usurper of the Qara Khitay state from 1211, the Buddhist convert Kuchluk imposed a pogrom on Muslims, including a three-year siege of Kashgar during harvest times, which starved the city into submission. He forced the Khotanese to give up Islam and crucified a resistant mullah in public. Kuchluk was defeated from 1216-18 by Genghis Khan, whose shamanist general stopped the looting and religious repression of his predecessor, promoting shamanism along with Buddhism and Christianity.

Until the 18th century, Islamic khanates in Xinjiang fought Chinese emperors for control of Xinjiang and beyond, and so were seen as major competitors. In 1697, the Galdan Khan of Zunghar in northern Xinjiang clashed with the Qing’s Kangxi emperor over domination of central and eastern Mongolia (the Khalkha Mongols), with which was associated the grand khanship of the Mongolian allies of the Chinggisid empire (of Genghis Khan) and patronage of the Gelugpa Tibetan Buddhist Church (now led by the Dalai Lama).

The plains of northern Xinjiang provided fodder and a central location from which to project cavalry power into Central Asia, Mongolia and Han China.

In 1754, the Chinese Qianlong emperor of the Manchu Qinq took advantage of a schism in Zungharia, allying with a Zunghar noble at the choke-point city of Ili. This allowed the Manchu to subjugate the Zunghar Mongols within months, and by 1759 they conquered all of Xinjiang, including Buddhists in the north, and Sufi Muslim rulers of the oases in the Tarim Basin.

To cement victory over the strategic northern Zungharian region, the Qing committed the Dzungar Genocide, in which contemporary researchers estimate 480,000 to 800,000 Buddhist Zunghar Mongols died (80 percent of the population) from conflict and disease. Contemporaneous Qing records, however, claim that the empire inflicted one million casualties in Zungharia. 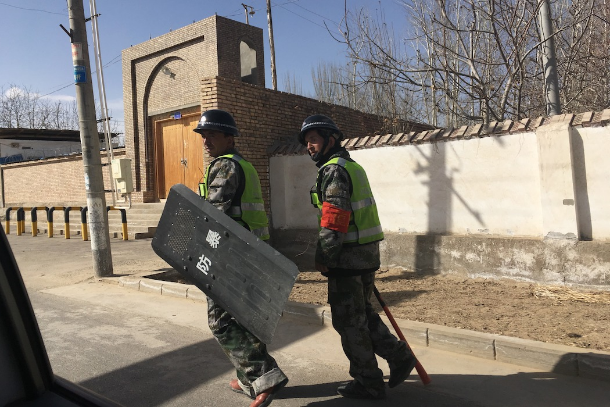 For comparison, this single instance of genocide is arguably five to ten times the total of native Americans killed by Europeans over four centuries, from 1492 to 1900 (not including those who died from infectious diseases). When apologists for Beijing’s current expansionism claim that China is just doing now what the U.S. did in the 19th century, it should be pointed out that China has historically, and is currently, doing far worse.

Two Muslim rulers of the south, the Afaqi brothers, rebelled against the Manchus, who bought off other Muslim rulers and petty aristocrats, including the Ishaqi faction and leaders in the far-eastern Xinjiang cities of Hami and Turfan, to defeat them.

Hami and Turfan had already surrendered to the Qing in the late 17th and early 18th centuries in a process similar to China’s acquisition of allies through commercial means today.

Historian Kwangmin Kim wrote: “Perhaps the eastern oases’ alliance with the Qing had to do with the area’s long-term commercial relations with China, which existed at the very least since the 15th century under the Ming dynasty (1368–1644). Turfan and Hami were the most avid participants in the official trade that was conducted in the Ming capital and some limited venues of frontier markets designated by the Ming, managed under the Chinese framework of the tribute system — the only form of transfrontier commerce with China sanctioned by the Ming government. These long-term commercial relations had gradually drawn the eastern oases under the increasing political influence of the Chinese empire, even before the Qing troops set foot in Xinjiang in the mid-18th century.”

The Qing governed indirectly through local elites, often selling the right to administer, develop and tax the six cities of the Tarim Basin to Muslim Qing loyalists from Hami, Turfan and other eastern oases. This eroded local power structures in the Tarim Basin and made the new local rulers dependent on the Qing for continuance of their positions.

The Qing rulers forbade Chinese from settling in densely populated Turkic areas in order to mitigate the risk of rebellion, a strategy that is often followed by China’s current multi-trillion-dollar One Belt, One Road (OBOR) global development program.

In the 21st century, China encourages Chinese OBOR workers to permanently emigrate to places like the Philippines and Africa after their “development” work is over. But Chinese immigrants are often segregated into Chinese developments — for example, one near Pakistan’s Gwadar Port, meant as a Chinese-only colony for 500,000 Chinese nationals. The CCP will likely seek to use significant numbers of Chinese national immigrants, whether in segregated or unsegregated colonies, to influence operations in the future, or even to extend its own territorial sovereignty, as it did in Xinjiang.

Trade, agriculture and mining development during the 18th century in Xinjiang, like today’s OBOR, was government-supported. The Manchus encouraged Chinese soldiers and convicts, as well as Muslims from Tarim and the Gansu corridor, to migrate to relatively undeveloped and depopulated northern Xinjiang.

Chinese money-lenders and traders streamed into Xinjiang. The colonies were 97 percent military in 1766, but that percentage decreased to 6 percent by 1807. At the turn of the century, about 155,000 Chinese Han and Chinese Muslim (Tungan) homesteaders lived in northern Xinjiang, where they worked in government-run farms.

By the late 18th century, the Qing in Xinjiang had skilfully divided, along sectarian lines, the Muslim population in Kashgar and the vicinity. The Ishaqi, who had supported the Qing in 1758-59, were given land, titles and the dominant position under Qing rule, with the formerly rebellious Afaqi as subordinates.

Afaqi leaders, reportedly along with a band of religiously observant Muslims, rubes and rogues, fled to the khanate of Khoqand in present-day Uzbekistan to avoid religious persecution. They sought to use Khoqand as a safe haven from which to launch armed raids to liberate Kashgar from the Qing. But the khan informed on them to the Qing, and occasionally detained them, in exchange for trade concessions and possibly a Qing stipend.

From 1809 to 1820, the khan of Khoqand sought additional trade concessions from the Qing, including the right to appoint his own tax representative in the Tarim Basin to collect taxes. The Qing refused, and so the khan turned a blind eye and sometimes even supported successful cross-border raids and revolts by as few as 500 Afaqis in 1815 and 1830. Heavy taxes and forced labor by the Qing eventually led the Ishaqis and diverse Muslim farmers to join the Afaqis against landlord aristocrats in the towns.

By 1832, the khan of Khoqand had obtained an informal agreement to administer and tax foreign trade in the southern oases of the Tarim Basin and possibly Zungharia to the north. It was, according to historian Joseph Fletcher, the first of China’s “unequal treaties,” which usually refer to Qing-signed treaties with the British and other Europeans in the late 19th century.

But such “inequality” would be from the perspective of the Qing. From the Khoqand or Afaqi perspective, it was likely a compromise less than they deserved, which would be the right of Turkic Muslims and other inhabitants to rule their own communities in Xinjiang. It was in any case a negotiated settlement based on the realism of relative power.

As they successfully fought for the territories of Xinjiang, the Chinese after 1830 increasingly saw the region as part of greater China, whereas previously they thought of it as an “outer” region. That sense of ownership of a foreign land and people by the right of conquest and immigration, paired with military and economic weakness, led directly to the significantly expanded Muslim rebellions of the 19th century.

This is the second article in a nine-part series on Xinjiang by Anders Corr, who holds a Ph.D. in government from Harvard University and has worked for U.S. military intelligence as a civilian, including on China and Central Asia.

Tomorrow: Muslim rebellion and Russian influence in Xinjiang, from the Opium War to 1950