Xi takes charge in China, religion in his sights

After an agonizingly long address at Congress, Communist Party leader makes it clear who is boss 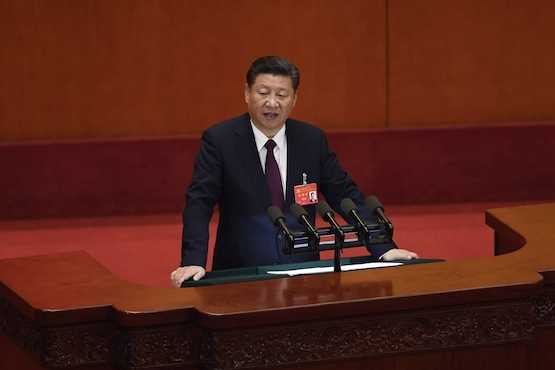 Chinese President Xi Jinping delivering a speech at the opening session of the Chinese Communist Party's Congress at the Great Hall of the People in Beijing, on Oct. 18. (Photo by Wang Zhao/AFP)

President Xi Jinping's opening speech for the Congress of China's ruling Communist Party on Oct. 18 took a decidedly, rigid socialist tone, signaling increased state control over the country which is expected to result in an increase in the persecution of religions.

Xi is expected to emerge from the 10-day summit with an iron-fisted grip on all aspects of the Party including the elite 25 man Politburo and its seven member Standing Committee. Designed by Deng Xiaoping to be a collective decision-making body with its leader first amongst equals, China watchers say Xi has turned this on its head and is now a virtual dictator.

In his opening speech, Xi advocated that the country's undemocratic system is a model for other countries to follow and laid out two ambitious "centennial goals." The first was to build a "moderately prosperous society" by wiping out poverty by 2021, the 100th anniversary of the Party's founding. The second was to turn China into a "fully developed nation" by 2049, the 100th anniversary of the Party winning the civil war.

Xi also laid out his contribution to the Party's principle, something every leader has done, with the catchy line: "Thought on socialism with Chinese characteristics for a new era."

Associate Professor Lawrence Reardon from the University of New Hampshire said Xi will undoubtedly continue his ideological crackdown on the Party and society over the next five years.

"Xi's policies are having a deleterious impact on the growth and toleration of religious belief in China, especially for those followers of the recognized 'foreign' religions (yangjiao) such as Islam, Protestantism, and Roman Catholicism," Reardon told ucanews.com.

During his first term as general secretary, Xi demonstrated a positive attitude toward state-regulated Daoism and Buddhism, which he believes embody China's superior moral traditions and could make positive contributions to the country's core socialist values. He is more dubious of foreign religions and influences, and called for them to become more "Sinicized," perhaps as Buddhism was Sinicized over the centuries.

"To control religious believers, Xi will continue to strengthen the Party's control over religious non-governmental organizations first approved in 2016, which were designed to prevent the development of an independent civil society," Reardon said.

"In 2017, Xi followed up with new regulations on religious affairs, which have strengthened the Sinicization of China's religions," he said.

"The Party state will continue to incarcerate those lawyers who attempt to defend religious freedom, including some of those '709 lawyers' who have remained in jail since 2015," he said referring to the detention of rights lawyers.

He added that the state has integrated its ongoing campaign against corruption with its crackdown on superstitions such as geomancy and soothsaying. Xi will likewise continue the crackdown on so-called "evil cults" and continue to battle forces of "terrorism, separatism, and extremism."

"In addition, the Party state is expected to strengthen its draconian controls over Islam in China's northwest provinces initiated in 2014 ostensibly to combat terrorism," he said.

"However, the genie is out of the bottle," he concluded. "The Chinese continue to search for a meaning of life no longer found in the tenants of communism, but in the prayer books and mantras of the religious life."