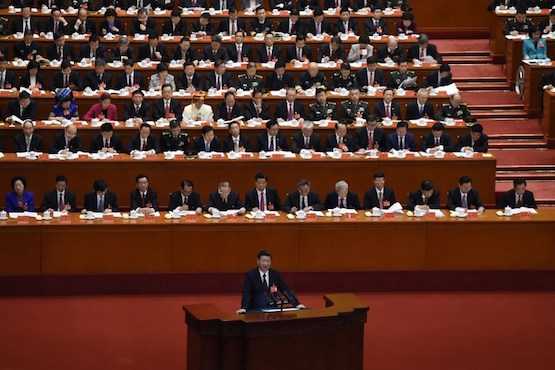 China's President Xi Jinping gives a speech at the opening session of the Chinese Communist Party's five-yearly Congress at the Great Hall of the People in Beijing on Oct. 18. (Photo by Wang Zhao/AFP)

China's leader Xi Jinping is poised to emerge from this month's Communist Party's Congress in an unassailable position readying to trample all imagined enemies, particularly dissidents and their most potent exponents — rights lawyers and religious groups.

After five years at the helm, Xi has consolidated his power to a point where he is poised to be a virtual one man politburo. The 19th Chinese Communist Party Congress, which takes place every five years, began Oct. 18.

Religion has always been seen as an existential threat to the Party: a fear of rival, nationwide networks and belief systems was underscored by the spectacular and tragic over-reaction to the rise of the largely spiritual Falun Gong movement in the 1990s.

Yet under President Xi, the Party has refocused on the so-called recognized "foreign religions" of Protestantism, Roman Catholicism and Islam. The other two recognized local religions are Daoism and Buddhism. The latter two, by dint of their local nature, have been more or less encouraged with the exception of Tibetan Buddhism whose leaders and practitioners are amongst the most persecuted people in China.

Last year, Xi himself fronted an unprecedented Party summit on religions. All but one of the top seven cadres in the Communist Party attended. After that, new rules to tighten control over religion were promulgated.

Historically, Islam has taken the biggest hit. Since 2009, when sectarian riots killed almost 200 people in China's far-west, the Party has sought to crush the culture of the ethnic Muslim Uyghur people who were once a majority in their Xinjiang homeland.

Catholics and other Christians are holding their collective breaths as low-level persecution has continued. A smattering of recent forced cross removals has ignited fears that the widespread campaign that saw hundreds of crosses torn down and churches demolished in heavily Christian Zhejiang province may be going nationwide.

Dozens of priests, bishops and pastors remain in jail but it's mainly the so called underground (Catholic) or house (Protestant) churches not already under government control that are the targets.

The five-yearly Congress names new members to the Central Committee of the Party which has about 200 members and 100 alternates. It in  turn "elects" 25 members to the political bureau, or Politburo, who become the de facto cabinet. From this group comes the highest leadership level of the Party, the Standing Committee of the Politburo, which presently consists of seven members.

It was designed by Deng Xiaoping to be very much a collective leadership and the top person in the group, the Party's secretary general, to be first among equals.

Of course, all the deals are done before the conferences and the process is top down rather than bottom up. Senior leaders backed by Xi, as well as former leaders who operate behind the scenes, also have an influence.

But it is clear that Xi has emerged as something more than a first amongst equals. He has placed himself as head of most of the important "leading" or "small" committees populated by the Central Committee's elites who set policy for the country.

The Party's fearsome propaganda machine which tightly controls the media across the entire country has conducted several campaigns promoting Xi. Initially he was an avuncular figure who would pop up in dumpling shops and cafes. He was Xi Dada — or Uncle Xi — replete with songs to match.

More lately he is being lionized as a fearless nationalist leader, a strongman who can restore China to its "rightful place" in the world and particularly the region.

As well as upgrading Xi's image, there has been the crushing of perceived enemies. These are usually groups or people who simply want to change the system to be more inclusive and look after citizens and their rights, nothing more.

The other element of the Xi regime that is increasingly unsettling China's neighbors is the process of Sinofication of South, Southeast and Central Asia. In this, China is taking a two-pronged approach through economic colonialism backed by an increasingly modernized military. China has been pouring investments into the region and has launched its first aircraft carriers, joining only a handful of nations to have such vessels.

Its bellicosity in colonizing huge tracts of the South China Sea, despite maritime disputes with seven other countries, has also shaken the region.

Meanwhile, its continued economic colonialism has proved to be a success in Cambodia. As more countries in Southeast Asia including Thailand, the Philippines and possibly Malaysia, fall under the sway of military or quasi-dictatorial regimes, China's model continues to gain traction, resulting in the situation where the Party not only has a grip over its citizens but across the region.

As Xi emerges ever stronger after the 19th Party Congress that grip looks to be tighter than ever.