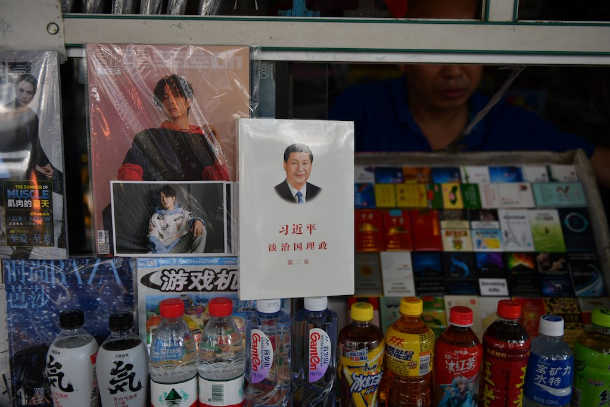 A vendor stands behind a copy of the third volume of a book about Chinese President Xi Jinping titled 'The Governance of China' at a news stand in Beijing on Aug. 11. (Photo: Greg Baker/AFP)

Chinese leader Xi Jinping has come under an unprecedented attack from a professor who accused him of “killing a country” and claimed that many members want to leave the ruling Chinese Communist Party (CCP).

Cai Xia, who taught at China’s elite Central Party School for top officials, was expelled from the CCP on Aug. 17 after an audio recording of remarks she made that were critical of Xi was leaked online in June.

The school said Cai, a professor at the party school since 1992, had made comments that “damaged the country’s reputation” and were full of “serious political problems.”

Cai told The Guardian on Aug. 18 that she was happy to be expelled.

“Under the regime of Xi, the Chinese Communist Party is not a force for progress for China. In fact, it is an obstacle to China’s progress,” she said.

“I believe I am not the only one who wants to leave this party. More people would like to withdraw or quit this party. I had intended to quit the party years ago when there was no more room to speak and my voice was completely blocked.”

Cai is the latest intellectual to be punished for criticizing Xi, whose ruthless leadership has included a crackdown on religion including the Catholic Church.

She said there was widespread opposition to Xi within the CCP but few dared to speak out, afraid of political retaliation and corruption charges. In this environment, Xi’s “unchecked power” and hold on all major decision-making had led to inevitable mistakes such as the handling of the Covid-19 pandemic.

“When no one can oppose him, that means that his power is unlimited,” she said. “He has made the world an enemy. At home, all these big issues are left to him to decide. In other words, whether it is a domestic or international issue, it is very difficult for others to restrict him. It is inevitable that his judgment and decisions will be mistaken.

“It is a vicious cycle. After a wrong decision is made, the result is not good. But those below are too afraid to tell him and wrong decisions continue to be made until the situation is out of control. In this vicious cycle, there is no way to stop the country from sliding toward disaster.”

Cai believes that discontent within the party is widespread.

“Those within the party have experienced the last 20, 30 years and they understand in which direction is right and which is a dead end,” she said. “We are among a group of cadres who joined the party after reform and opening. So that is why I say everyone is very clear about what is happening.”

She added: “Many of my good friends who saw the news of me being expelled are cheering. They think this is a good thing.”