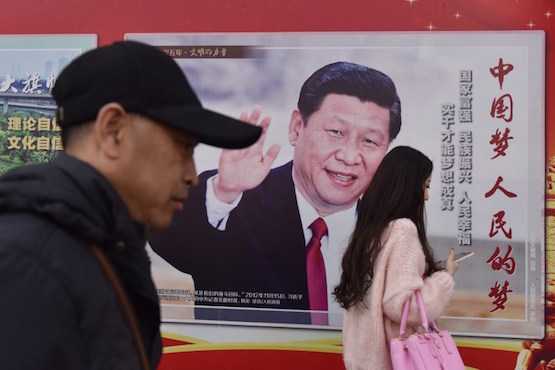 People walk past a poster of Chinese President Xi Jinping beside a street in Beijing on Feb. 26. Xi Jinping's tightening grip on China had already earned the leader comparisons to Mao Zedong, but they came into even sharper focus after the party paved the way for him to assume the presidency indefinitely. (Photo by Greg Baker/AFP)

The government proposes to kill the two-term limit for China's head of state — a plan that is certain to be passed by the National People's Congress on March 5.

Xi's first five-year term has been marked by his aggressive actions against critics and religious groups.

Father John of northeastern China told ucanews.com that all Chinese understand what Xi is going to do.

"Xi does not arrange his successor and even Premier Li Keqiang is retained only to be a display," he said.

"What is the impact on the church? Only worse! Xi is following Mao's leftist line, which is hostile to religions, especially 'Western' religions."

Ying Fuk-tsang, director of the divinity school at the Chinese University of Hong Kong, said the statement about the proposal "indirectly said that Xi Jinping's religious policy will continue, that the government's control will be more stringent."

A northeastern Catholic who asked to be named as Paul told ucanews.com that scrapping the term limit means that Xi may be re-elected for more than two terms.

"The influence will be great. If he wants to be a dictatorship, he will suppress those opposing him, including religion. That is exactly what Mao Zedong was doing," he said.

He believes the underground church under such a political atmosphere "can only be a slaughtered lamb."

Father David of an open church group in Sichuan province told ucanews.com that he predicts Xi to become "a second Putin" but he was not worried that religions will be annihilated in China, even though rules will be tightened.

Referring to the expected Sino-Vatican agreement on appointing bishops, the priest believes that under the current political environment in China the Vatican will be deceived.

A priest at an open church in Hebei province told ucanews.com that Xi is a "political dictator" and that religion can only be a "caged bird."

He added ironically: "Let's see what magic there is in Rome to expand the cage. For Sinicization, the imperial power is higher than theocracy and the party's purpose to lead everything is achieved."

When ucanews.com tried to contact sources in China, many messages were blocked.

A Catholic from Wenzhou Diocese said Xi wants to achieve a communist emperor's dream to lead China to go backwards, and he said that later "go backwards" will be blocked online as well.