Wuhan picks up the pieces to crawl back to life

As the Chinese city's lockdown is eased, Covid-19 has changed the lives of many people forever 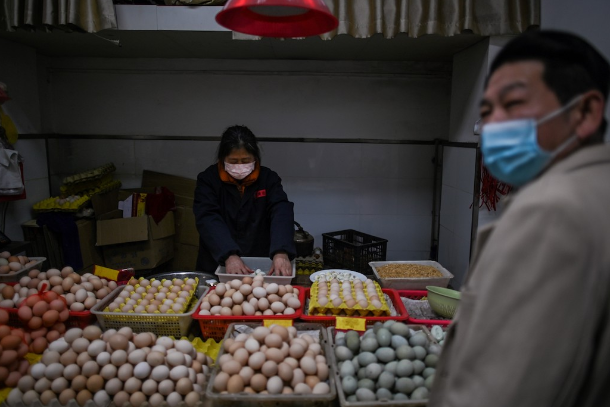 A vendor wearing a face mask sells eggs at a market in Wuhan on April 2. The Chinese city, where the coronavirus first emerged in December, partly reopened on March 28 after more than two months of near total isolation. (Photo: Hector Retamal/AFP)

The Chinese government is relaxing the more than two-month lockdown in Wuhan city, where the Covid-19 pandemic emerged last December, but life will never be the same for most of its 11 million people.

Ever since the novel coronavirus was first reported in the seafood market of this city, the capital of Hubei province in central China, it has officially killed more than 3,300 people across the country. The city suffered most. About two-thirds of China's over 82,000 infections were in Wuhan.Wuhan residents, who have been indoors since Jan. 23 after infections began to kill people, say they have been "adding oil" to others — a Chinese expression for encouraging and supporting others.Chinese authorities have relaxed controls over Hubei since March 25, but Wuhan will wait until April 8 to open its doors to traffic from outside the city.Wuhan's favorite breakfast noodles are back, showing signs of the city coming back to life. But in early March authorities brought in a comprehensive law banning the trade and consumption of wildlife, previously part of the activities at the busy Huanan Seafood Market.

Chinese officials have identified wild animals sold at the market as the source of the coronavirus, which has infected more than 50,000 people in Wuhan, killed more than 53,000 persons worldwide and sent the global economy into meltdown.Business and food apart, there are other reasons why life will be far from normal for many in Wuhan. Thousands have lost their family members, and most were unable to arrange even a decent funeral or even attend their burial or cremation. Many say they could not even mourn the deaths as they were busy taking care of themselves or other family members stricken by the killer virus.

Mary Zhao arrived from Hunan before Chinese New Year to take care of her father, who was bedridden because of cancer. Her brother also came to Wuhan to spend the New Year days together with his father."On the 10th day of Chinese New Year (Feb. 3), my father died. The government funeral home took his body away," she said. There was not even a chance to mourn for the departed soul.
Related News "I'm a Catholic but I could not conduct funeral prayers for my father because of the epidemic. My heart is still heavy. I cannot let go of the feeling that I failed to conduct a proper funeral and burial for my father," Zhao said.The authorities rushed the cremation and asked her to collect the ashes when the pandemic is over.Zhao said hundreds of people whose relatives died of Covid-19 are in the same boat of not having an opportunity to conduct proper funerals and mourning to get over their losses. Some are emotionally wrecked, she said.Take the case of Zhao’s classmate whose husband and son died of Covid-19. Her friends and relatives comforted her through phone calls and social media. But those efforts did nothing to help the deeply depressed woman. "She now sits at home alone. Every day. Does nothing or does not want to do anything. Her whole life looks ruined," Zhao said.Zhang Xiaohua, who runs a hardware store in central Wuhan, said he suffered a heavy loss from the city's lockdown. His monthly rent was more than 10,000 yuan (US$1,400) and he had a housing loan to pay.He did not expect the epidemic to last for more than two months and cause so many deaths. His family had not stocked food items for two months, and money was also tight. They "ate what they could."Prices have spiraled during the period. "We had no choice other than buying food at a premium, but I really could not afford it," he said.Zhang said he took a walk after authorities relaxed restrictions in Hubei. "Passing through the provincial gate, it felt like the road was empty, like a ghost town," he said.He said it is a “blessing from God” that he has no mental problems even after being inside his home for more than two months.He said he no longer cares about luxuries and non-essential shopping. "It doesn't matter how much money you have. Safety of family is the most important thing."Pain of family members dying aloneTeresa Qiu, a clerk in the Hankou area, said she was quarantined from Feb. 1 "because someone in our building tested positive."She was afraid to go out or even open the door until there was "really nothing to eat at home. The community workers brought food to the door. But I was scared even to open the door," she said.And then, on Feb. 9, she learned the most disheartening news from her father that her mother in Wuchang was infected. The elderly woman was quarantined at home. Qiu could not go and meet her mother because of strict restrictions. The telephone was their only medium to comfort each other.

One day her father called and told her that her mother had just died. They cried loudly.

"It was at home because there were no beds in the hospital. We both were crying. I didn't know how to comfort dad, and I didn't know how to comfort myself," she said.At the peak of Covid-19 in January and February, Wuhan's overwhelmed hospitals were forced to ration beds, tests and medical supplies. Overworked doctors witnessed hospitals crammed with affected patients, exhausted colleagues helpless to save the dying, and bodies lying around for hours before undertakers could remove them. After the government undertakers took away Qiu’s mother's body, her dad was isolated at home. "I didn't know what to do every day except call Teresa," he said.Qiu learned from social media about the thousands of deaths and the need to be quarantined until the epidemic was over."What matters is that my dad is still around. And I have a dad," she said.She said she would quit her job in Hankou and return to live with her father in Wuchang.

'It is not yet over'

Ah Piao was a part of a volunteer group delivering medical supplies to medical staff by car at the beginning of the epidemic. "It was a tiring time, but it was fulfilling and more exciting than when I used to work for money."

After the strict lockdown was imposed, Ah Piao stayed at home, gathering information from the internet with his wife and helping out whenever he could.

He believes that even if many of the restrictions are lifted, "we will not have full freedom and will have to go out with medical credentials."

Ah Piao's advertising company was shut for two months. He said he suffered economically but pays his employees on time from his savings. "It's not easy," he said.

Wuhan authorities have reported that there are no more new coronavirus cases in the city. But Ah Piao said it was "deceptive" because cases cannot be reported when there is no medical testing for patients.

"A doctor friend told us to keep inside our home as long as possible, even if the government relaxes restrictions, because there are still a lot of people infected. Hospitals are not confirming infections as Covid-19," Ah Piao said.

Zhang Xiaohua in Wuhan said his friend’s father died of Covid-19. Later his friend was also infected. But doctors at the hospital will not confirm his case as Covid-19.

"It looks like the government is still hiding the truth, waiting for all the infected to die," Zhang said.