Would this poster get young people into your church?

Or should the Catholic Church steer clear of trying to be trendy? 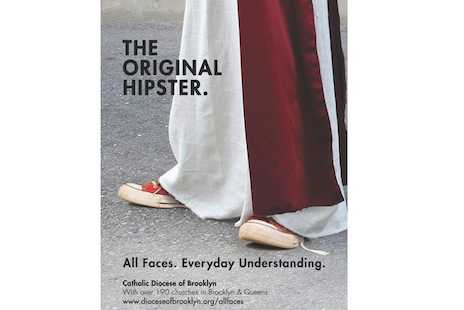 A new advertising campaign by the Roman Catholic Diocese of Brooklyn labeling Jesus as “The Original Hipster” is creating a buzz, but will it attract the intended audience?

“Most Catholics,” wrote the diocese’s communication chief Msgr. Kieran Harrington, “see the church as archaic and not relevant, nor valuable, to their everyday lives.” Harrington said the diocese is taking the more modern approach of “poking fun” at itself and its hip location to draw more people to services.

Part of a series launched in April, the ad shows a pair of Converse sneakers peeking out from underneath a white and red robe. It can be seen in bus shelters and phone kiosks throughout the borough. The $50,000 campaign’s catchphrase is “All Faces, Everyday Understanding,” and posters written in Chinese, Spanish and Polish are also on the way.

Harrington said the new marketing push is “geared towards reaching a  younger, more diverse demographic by showing the cooler and more  welcoming side of the Catholic Church.”

But not everyone is buying the connection.

“I wouldn’t describe Jesus as a hipster,” said 30-year-old Matt Meeks after evening Mass at Our Mother of Good Counsel Church in the Los Feliz neighborhood of Los Angeles, part of the city’s own hipster enclave along with neighboring Silver Lake.

“A hipster is really the person that’s on top of the current trends but that fades,” Meeks continued. “What’s a hipster today is not a hipster tomorrow.”

The Jesus ad is winning praise among advertising experts, however.

Swerling, who has spearheaded campaigns for General Motors, Honda and Cisco Systems, among many others in his 40-year career, warned that like any other marketing effort, the product must live up to its expectations in order to create anything more than short-term buzz.

“The experience will turn people into what I think the church probably hopes for,” Swerling said. “And that is long-term visitors.”

Church attendance has been on the decline for years following more than a decade of scandalous sex abuse revelations in dioceses across the country. A 2008 Pew survey found that people leaving Catholicism outnumber those who join the faith by nearly four to one. And nearly half of all US Catholics wanted the new pope to “move the church in new directions,” according to data released by the Pew Forum on Religion and Public Life in February.

The campaign’s success will be hard to quantify since the church doesn’t keep tabs on who shows up to Mass. But according to the diocese’s press secretary, Stefanie Gutierrez, people are increasingly going online to find their local parish since the campaign launched last month.

“We have seen a 400 percent increase in our website traffic,” Gutierrez says.

But will the Jesus ad will entice more people to go to church?

Meeks isn’t so sure.

Meeks’ concern doesn’t bother Swerling, who says the church’s target demographic will probably find a message they can relate to in the campaign.

“It’s easy to assume people don’t want to be called hipsters,” he says. “Yet when you think about how they tend to brand themselves … They pride themselves on being different.”

The Diocese of Brooklyn’s Gutierrez says that connection is what makes the diocese’s message relevant.

“Jesus stood in contrast to the culture of his day, and quite frankly, that’s what hipsters do,” she says.