United States Geological Survey ruled out threat to people living below the eruption zone, but warned volcano was volatile 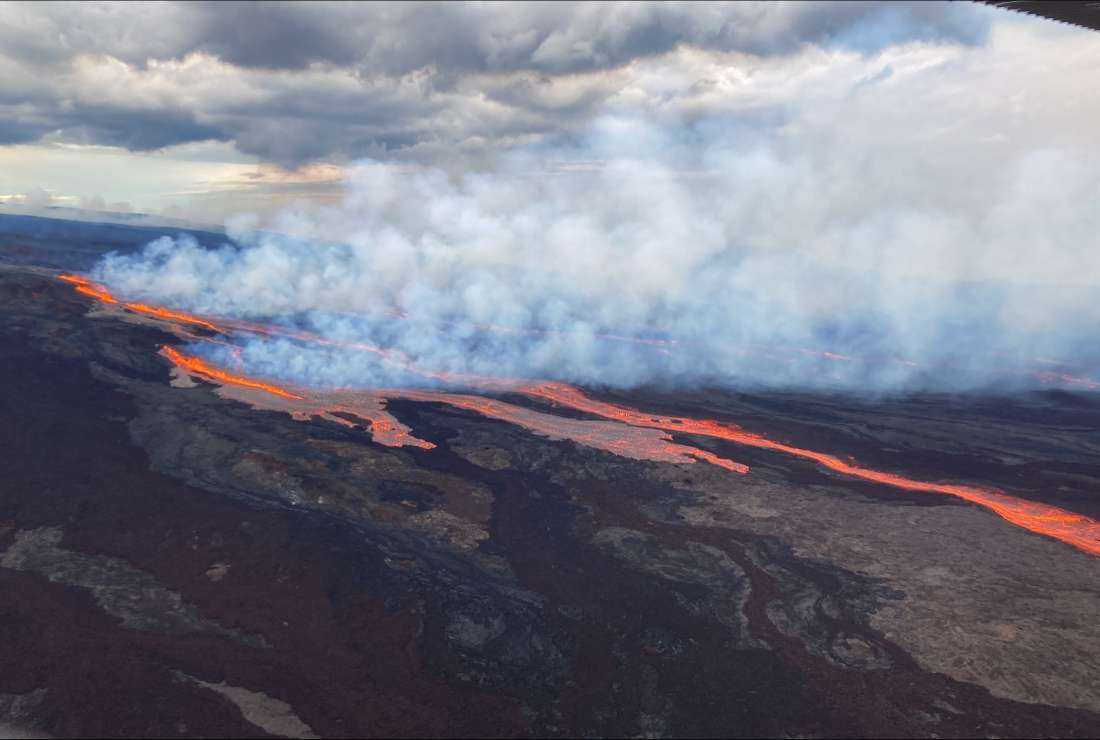 This aerial image released by the US Geological Survey (USGS) from Civil Air Patrol shows the lava on the northeast rift zone of Mauna Loa in Hawaii on Nov. 28. (Photo: AFP)

The world's largest active volcano burst into life for the first time in 40 years, spewing lava and hot ash Monday in a spectacular display of nature's fury by Mauna Loa in Hawaii.

Rivers of molten rock could be seen high up on the volcano, venting huge clouds of steam and smoke at the summit on Big Island, and sparking warnings the situation could change rapidly.

Pressure has been building at Mauna Loa for years, according to the United States Geological Survey (USGS), which reported the eruption could be seen from 45 miles (72 kilometers) away, in the town of Kona the west coast of Hawaii's main island.

The eruption, which began shortly before midnight Sunday, was initially contained within the caldera -- the concave area at the top of the volcano -- but vulcanologists said Monday lava was now escaping from cracks in its side.

"The eruption of Mauna Loa has migrated from the summit to the Northeast Rift Zone where fissures are feeding several lava flows," the USGS said on its website.

The agency said there was currently no threat to people living below the eruption zone, but warned that the volcano was volatile.

"Based on past events, the early stages of a Mauna Loa rift zone eruption can be very dynamic, and the location and advance of lava flows can change rapidly."

Experts also cautioned that winds could carry volcanic gas and fine ash downslope, as well as Pele's Hair -- the name given to fine strands of volcanic glass formed when lava skeins cool quickly in the air.

Named after Pele, the Hawaiian goddess of volcanoes, the strands can be very sharp and pose potential danger to skin and eyes.

Long Mountain
Authorities in Hawaii have not issued any evacuation orders, although the summit area and several roads in the region were closed, and two shelters have been opened as a precaution.

An ashfall advisory has been issued downwind of the volcano, with a light accumulation of ash expected on ships in ocean waters along the Big Island's southeast.

Vulcanologist Robin George Andrews said the eruption had originally been contained, but was now spreading.

"Oof. Lava is now erupting from fresh vents on the slopes along Mauna Loa's Northeast Rift Zone, or NERZ. That brings a new hazardous dimension to the eruption," he wrote on Twitter.

"The fact that it is a hazardous mountain that hasn't erupted since 1984 -- the longest eruptive pause in its recorded history -- is why we should all keep an eye on it."

But Andrews predicted that unless the lava flow rate picks up dramatically, the city of Hilo to the northeast, home to about 44,000 people, "will be okay."

The largest volcano on Earth by volume, Mauna Loa, whose name means "Long Mountain," covers half of the Big Island and is larger than the rest of the Hawaiian islands combined.

The volcano's submarine flanks stretch for miles to an ocean floor that is in turn depressed by Mauna Loa's great mass -- making its summit some 17 kilometers (10.5 miles) above its base, according to the USGS.

One of six active volcanoes on the Hawaiian islands, Mauna Loa has erupted 33 times since 1843.

Its most recent eruption, in 1984, lasted 22 days and produced lava flows which reached to within about seven kilometers (four miles) of Hilo.

Kilauea, a volcano on the southeastern flank of Mauna Loa, erupted almost continuously between 1983 and 2019, and a minor eruption there has been ongoing for months