Beijing's economic, military and diplomatic power has persuaded many countries to be complicit in persecution 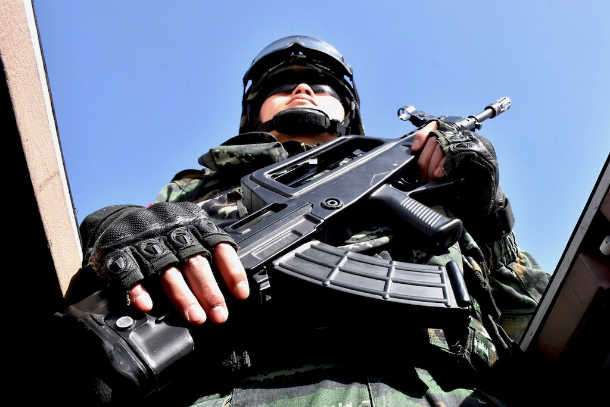 A Chinese military policeman attends an anti-terrorist oath-taking rally in Hetian in Xinjiang in February 2017. World reaction to the Xinjiang crisis is muted because of China’s economic, military and diplomatic power. (Photo by AFP)

The detention of one to three million Uyghurs and other Turkic Muslims in Xinjiang is now leading to scattered international criticism and some calls for sanctions against Chinese Communist Party (CCP) leaders to force China to desist in its policy of ethnocide. Turkey has led criticism of China as it shares Islam and Turkic culture with the Uyghurs.

On Feb. 24, activists held simultaneous events in nine countries to educate the public about Xinjiang. Some United Nations entities have challenged China’s abuse of the Uyghurs, including the U.N. Committee to Eliminate Racial Discrimination in August 2018 and the U.N. High Commissioner for Human Rights Michelle Bachelet in September 2018.

Academics and journalists have signed public letters condemning the repression. The U.S. State Department has issued criticism of China. Senator Marco Rubio of Florida and the House Committee on Foreign Affairs have taken the lead on the Xinjiang issue in the U.S. government. Last October, Malaysia defied China and freed 11 Uyghurs, who flew to freedom in Turkey. They had been held in detention since November 2017 after escaping from detention in Thailand.

On Feb. 25, Turkey and Britain were the only two countries to criticize China’s operations in Xinjiang at the opening of the main annual session of the U.N. Human Rights Council. China responded in early March by closing a consulate in Turkey, advising Chinese citizens not to travel to Turkey, threatening other unspecified forms of economic retaliation, and on March 9 arresting four Turkish businessmen at an international conference, allegedly for evading import taxes.

International criticism of China on Xinjiang has been muffled when not absent altogether. Most frequently, a chilly silence has met the Xinjiang ethnocide, an omerta that shades into active complicity.

But there is also active support. An astonishingly long list of countries, likely under pressure from China, broke the international legal principle of non-refoulement, for example, which forbids forcibly deporting refugees to the country of origin if they face persecution.

On Feb. 25, Chinese state media published a list of eight countries that sent representatives to Xinjiang to receive the official Chinese defense of its operations. The article published supportive quotes from Russia, Cuba, Cambodia, Belarus, Venezuela and Senegal. Officials from Pakistan and Egypt attended but were not quoted in support of the program.

China’s influence is not just aimed at individual companies and states but extends to processes of international governance, as was evident at the human rights investigation of China at its 2018 Human Rights Council universal periodic review (UPR). China influenced countries to take a position of indifference to the plight of illegally detained Turkic Muslims.

Andrea Worden, an independent researcher and human rights advocate with deep experience on China issues, wrote in an email that the UPR was one of the key innovations of the Human Rights Council, which replaced the beleaguered U.N. Commission on Human Rights in 2006.

“That every U.N. member state, without exception, would have its human rights record reviewed at regular intervals was a very significant development. But because it is a review conducted by states, rather than independent experts, it's susceptible to geopolitical pressures, a dynamic clearly on display during China's recent UPR,” she wrote.

“The vast majority of developing countries that participated in the review lavished praise on China, thanked it for providing aid and for sharing best practices regarding the right to development and poverty alleviation. Pakistan's intervention highlighted the issue of ‘capture’ perfectly. Pakistan, a Muslim-majority country that has citizens directly affected by the mass incarceration of Uyghurs in Xinjiang, did not raise this pressing human rights issue during China's UPR but instead stuck to China's talking points."

As with Pakistan, the silence on Xinjiang from global heads of state is palpable. Presidents and prime ministers of the U.S., Britain, France, Germany and Japan have been silent. Muslim democracies, which are subject to public opinion pressure, should also be among the first to take a stand. But heads of state from Indonesia, Malaysia and Bangladesh have been silent. Other Muslim countries, including Egypt and Algeria, should defend their co-religionists but do not. Uyghurs have deep ethnic and linguistic ties with present-day Mongolia and Iran, so they too should take a stand. But we hear very little from these countries.

Saudi Crown Prince Mohammed bin Salman, during his February visit to China, made no reported mention of the Xinjiang situation. He was there to sign 35 economic cooperation agreements worth US$28 billion. Chinese state media quoted the Saudi leader as supporting China’s counterterrorism operations, though without specifically mentioning Xinjiang.

“China has the right to take anti-terrorism and de-extremization measures for safeguarding national security,” CCTV quoted the Saudi leader. “The Saudi side respects and supports it and is willing to strengthen cooperation with China.” CCTV did not broadcast a voice recording of the prince’s remarks, and China’s media has in the past faked material from heads of state. China might well have faked the Saudi leader’s comments, but Saudi sources have not disputed them.

Turkey, while a leader in defending the Uyghurs, has nevertheless taken a disappointingly mixed stance on the issue. In 2009, then prime minister Recep Tayyip Erdogan called China’s anti-Uyghur crackdown “a kind of genocide.” But as president in 2015 on a visit to Beijing, Erdogan was supportive of China’s “territorial integrity” and critical of “ill-minded forces” trying to sow dissension in China-Turkey relations.

In 2015, Turkey reportedly provided travel documents to Uyghurs in southeast Asia to assist with their escape, but in 2016 Turkey arrested 100 Uyghurs en route to freedom in Saudi Arabia.

When a Uyghur musician reportedly died in Chinese custody in early February, the Turkish Foreign Ministry released a statement calling on China to close the “concentration camps” and cease arbitrary arrests, torture and political indoctrination. China claimed reports of the death were false, presented its Xinjiang operations as counterterrorism, called the Turkish statement “completely unacceptable” and demanded a withdrawal. Turkey has received thousands of Uyghur refugees, but shortly before the recent Foreign Ministry statement it too started policies to pressure Uyghurs out of the country.

World reaction to the Xinjiang crisis is muted because of China’s economic, military and diplomatic power. The country’s businessmen offer lavish deals, loans and bribes to friendly foreign governments and officials.

Intransigent countries, most recently Taiwan and the Philippines, get penalized in trade relations and even threatened with war. Since the CCP took power in 1949, it has fought wars against U.N. forces in Korea, the Soviet Union, India and Vietnam. It has funded, supported or supplied conflicts in Malaysia, Cambodia, Myanmar and Afghanistan. Its threats are not idle.

Governments and corporations, subject to China’s influence, threats, misinformation and checkbook diplomacy, are loath to criticize the country for fear of losing trade, market share or growth opportunities. China is quick to retaliate economically for any perceived slight, and such retaliation can mean the loss of billions of dollars in exports. Exporters that China has targeted for political reasons have included Australian coal producers, New Zealand’s tourism industry, Philippine banana producers and South Korean food and music industries.

Conversely, international political leaders who support China set their countries and themselves up for outsized profits. China accounts for over 10 percent of global trade and is the world’s leading exporter and second biggest importer. This global trade dominance, rivaled only by the U.S. as lead importer, gives China access to virtually all the world’s most important business and political elites.

Cognizant of past losses and future potential benefits, international leaders who benefit from Chinese investment in their countries are looking the other way, captured by profit from China’s economic activity.

China’s use of bribes

To explain the remarkable silence of world leaders on the ethnocide in Xinjiang, one must at least consider the possibility that China could be using various forms of personal economic influence, including bribes, to buy support.

Chinese businesses have allegedly been caught ensnaring multiple officials in bribery scandals, including the president of the U.N. General Assembly, the president of Chad, the former foreign minister of Senegal and multiple Bangladeshi officials. A single Chinese company, Huawei, has faced allegations of bribery in nine cases, including in Algeria, Zambia and the Solomon Islands.

Some personal economic influence can be legal. Former U.S. government officials such as Secretary of State Henry Kissinger, Secretary of Treasury Timothy Geithner, Secretary of Homeland Security Tom Ridge and Secretary of Defense William Cohen have done business with Chinese entities after they left office, as have lesser U.S. officials such as Admiral William Owens, Joseph Nye and Kurt Campbell. British and Australian prime ministers, including David Cameron and Kevin Rudd, have also had business or family financial connections to China after leaving office.

Most of this business is opaque to the public but some deals do make the news and can amount to hundreds of millions of dollars. Government officials sometimes bend over backwards to please a country that could be their best source of income when they leave office.

This is the seventh article in a nine-part series on Xinjiang by Anders Corr, who holds a Ph.D. in government from Harvard University and has worked for U.S. military intelligence as a civilian, including on China and Central Asia. The first six articles can be found by clicking here.