Fishing boats tied up in a harbor in Kerala, India. It is believed 183 asylum seekers were on board a fishing boat that left Kerala on Jan. 12 but has gone missing in the Indian Ocean. (Photo from Pixabay)

Somewhere in the Indian Ocean, a boat laden with asylum seekers has gone missing. All souls are feared lost and a sore point with those who have followed the plight of the Daya Mata is that barely no one outside the subcontinent has even noticed.

The sad episode began last year when people smugglers set about touting their wares among refugee families living in India whose relatives had already been resettled in Australia.

But Australia, with its tough no-entry policies for refugees arriving by sea, is no longer an option. Nearby New Zealand — a 47-day voyage — was considered the next best prospect, although not one refugee boat has ever made it to that country.

Initially, more than 200 passengers signed up but 71 discarded bags found on beaches led Indian authorities to believe that some had decided against boarding at the last minute, probably realizing the Daya Mata was hopelessly overcrowded for such a lengthy trip.

Authorities now believe 183 passengers, including women, children and infants, were on board the boat, with people smugglers charging each adult US$5,000 and US$1,600 per child for a trip that would brave monsoons and storms in three oceans: the Indian, Southern and Pacific. 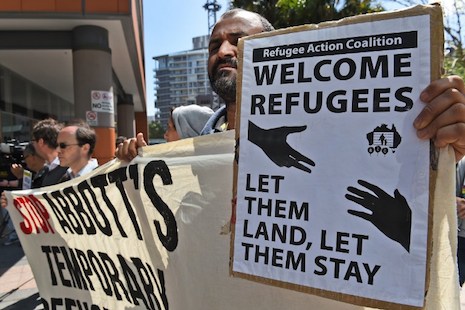 The Daya Mata, no more than a fishing boat, set sail from Munambam harbor in Kerala state in India’s southwest on Jan. 12 after a three-day delay caused by a national strike. Maritime sources said the Indian Navy and Coast Guard had tracked its departure but lost sight of the vessel within just 10 hours.

Had the voyage gone to plan, the Daya Mata should have landed in New Zealand around the end of February, meaning it is at least three months overdue.

Towards the end of January, Kerala police said they had received information that the boat had changed direction and anchored in Indonesian waters near Java with fuel and food running short. More than 10,000 liters of diesel had been stockpiled for the voyage.

They had also confirmed that passengers were from the Ambedkar colony in Delhi — whose relatives had left for Australia a decade earlier — and Chennai. Among them were Sri Lankan Tamil refugees who fled a 26-year civil war and were residing in India.

But nothing more was heard of them until this week when another police report claimed they had docked on the east coast of Africa.

M.J. Sojan, superintendent of Ernakulam rural police, told ucanews.com that there was no evidence to back claims that those on board had perished. He even went so far as to say the boat had berthed in Africa and some had escaped — as unlikely as it sounds — into the Congo.

That police report, like the dispatches from Indonesia, has proved impossible to verify, with relatives and friends of the asylum seekers, who might have had contact through satellite phones but fear law enforcement, refusing to speak.

“We have sought the help of Interpol to track these people as the Kerala police don’t have overseas jurisdiction. The agency has already issued a Blue Corner Notice to apprehend them,” Sojan said.

A Blue Notice is a request to “locate, identify or obtain information on a person of interest in a criminal investigation” — and in this case Interpol has had little success.

Police said a lack of jobs and poor living standards were behind the decision to engage an illegal people-smuggling racket, particularly among hard-hit Tamil refugees living in India where opportunities are limited and fears of persecution in Sri Lanka remain strong.

While international investigations yielded little, the Intelligence Bureau in India had some success with the arrests of Ravi Sanoop Raja, an ethnic Tamil, and Prabhu Dandapani from New Delhi. He had apparently visited New Zealand and Australia before.

A Special Branch operation resulted in the detention and release of the boat’s part-owner Anil Kumar. But his partner, a Sri Lankan who lived in India for three years and is known as Srikanthan, was reported as still at large and is wanted for questioning.

Srikanthan was touted as ring leader in the Indian press. A raid on his house at Chavadinada in Thiruvananthapuram recovered six passports, bank checks, land titles and passbooks for accounts in numerous banks, including some in Switzerland. Ten middlemen were also identified.

Documents written in Tamil were discovered too. In preparing for the voyage, passengers had moved to Cherai — where they posed as tourists staying at local hotels and beach resorts — south of Munambam, which sits at the mouth of a safe harbor adjoining the Arabian Sea.

More than 100,000 Tamil refugees are living on the subcontinent, more than half in camps dotted along the southeast coastline of India. Repatriation efforts since the Sri Lankan civil war ended 10 years ago have been stifled by complaints that they are not welcome in their homeland.

A lack of access to education and employment, and ongoing resentment over the bitter and failed struggle by the Liberation Tiger Tamils of Eelam to establish an independent homeland, are often cited as barriers by those who have returned. That continues to underpin the rackets.

Still, Indian authorities deserve praise for their handling of the scourge. People-smuggling networks have been dismantled and no longer pose the same threat as they once did.

But the Daya Mata serves as a reminder of the dangers posed by the unscrupulous dangling promises to the oppressed.

Sadly, those on board the boat may well have perished without trace and barely a word of concern — an indictment of more broader attitudes to refugees who only make headlines when they arrive and are unwanted — in countries that have toughened up their policies on asylum seekers.