Pope Francis reaffirms that the use, and even possession, of nuclear weapons is immoral 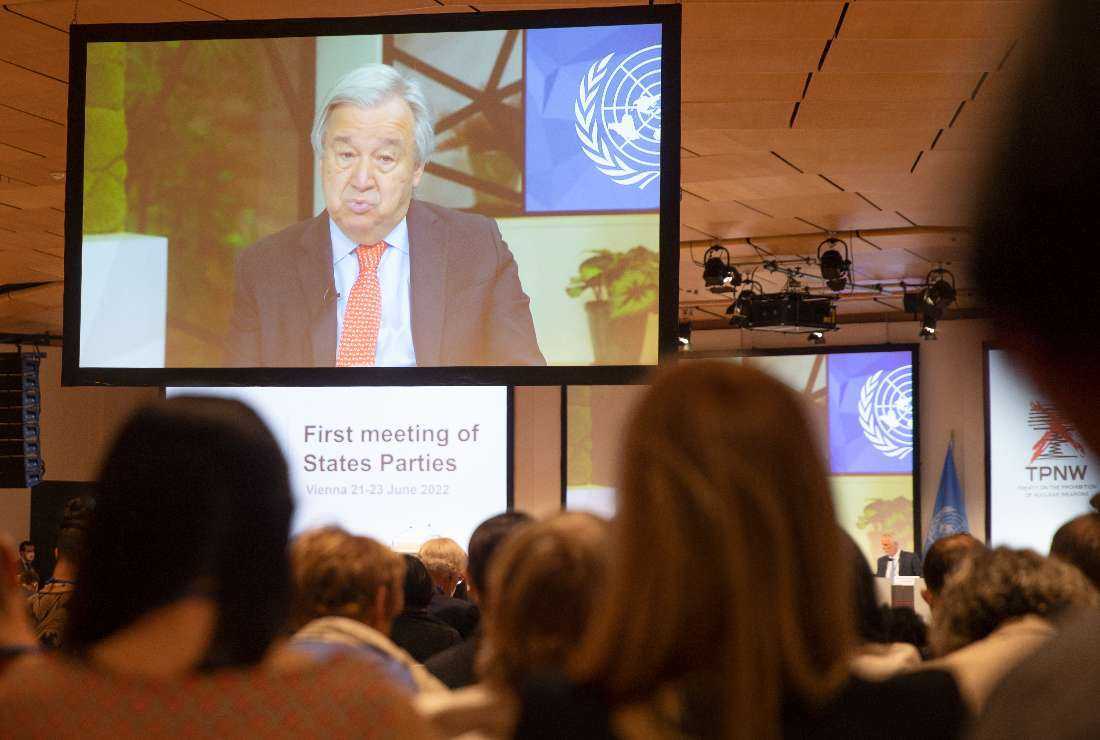 UN secretary-general Antonio Guterres speaks via video during The Treaty on the Prohibition of Nuclear Weapons Meeting of States Parties in Vienna, Austria, on June 21. (Photo: AFP)

Nuclear weapons do not increase a nation's or region's security; in fact, they are a "risk multiplier" that gives people a false sense of security, Pope Francis said in a message to an international conference.

Archbishop Paul Gallagher, the Vatican foreign minister, read the pope's message in Vienna on June 21 at the first Meeting of States Parties to the Treaty on the Prohibition of Nuclear Weapons.

The treaty, which prohibits the deployment, possession, moving, storing and stationing of nuclear weapons, entered into force in 2021; it has been signed by 86 nations and ratified by 62 of them, including the Holy See. The United States, Canada and other members of NATO have not signed the treaty, nor have Russia and China.

"A world free from nuclear weapons is both necessary and possible," Pope Francis wrote in his message to the conference. "In a system of collective security, there is no place for nuclear weapons and other weapons of mass destruction."

Nuclear deterrence, he said, is in no way a deterrent to most of the world's most serious problems, including terrorism, cyber attacks, environmental catastrophes and poverty.

Then, he said, one must consider "the catastrophic humanitarian and environmental consequences that would follow from any use of nuclear weapons, with devastating, indiscriminate and uncontainable effects, over time and space."

"Nuclear weapons are a costly and dangerous liability. They represent a risk multiplier that provides only an illusion of a peace of sorts"

Even simply maintaining the weapons is costly -- drawing resources away from positive actions like education, health care and poverty reduction -- but there also is the constant "risk of accidents, involuntary or otherwise, that could lead to very troubling scenarios."

"Nuclear weapons are a costly and dangerous liability. They represent a risk multiplier that provides only an illusion of a peace of sorts," the pope said.

"I wish to reaffirm that the use of nuclear weapons, as well as their mere possession, is immoral," Pope Francis wrote.

"Trying to defend and ensure stability and peace through a false sense of security and a 'balance of terror' sustained by a mentality of fear and mistrust inevitably ends up poisoning relationships between peoples and obstructing any possible form of real dialogue," he said.

In addition, the pope wrote, the possession of nuclear weapons "leads easily to threats of their use, becoming a sort of 'blackmail' that should be repugnant to the consciences of humanity."

The treaty, he said, brings more than a legal obligation, it is a sign of a "moral commitment" and a pledge to "promoting a culture of life and peace based upon the dignity of the human person and the awareness that we are all brothers and sisters."