Workers suffer due to demonetization, tax reforms in India 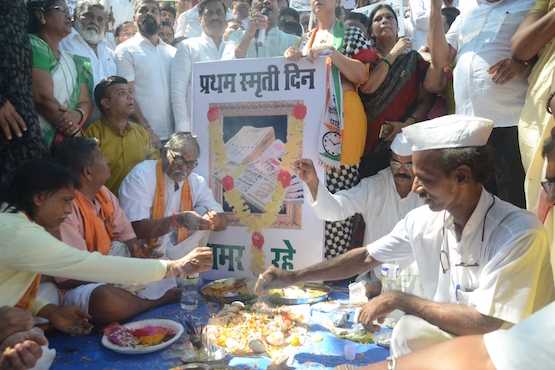 Supporters of the Congress Party join a demonstration in Mumbai Nov. 8 marking the anniversary of the 'Black day' of demonetization. (Photo by IANS)

A Catholic agency in India is seeking government help for un-unionized workers who lost their jobs because of currency and tax measures.

And in July this year a new goods and services tax (GST) was introduced.

The office of labor of the Catholic Bishops’ Conference of India notes that a slowing of the economy following demonetization impacted heavily on daily-wage workers.

This had been particularly evident in the farm and construction sectors, the Catholic agency said following its recent annual meeting.

The secretary of the agency, Father Jaison Vadassery, said workers in the unorganized sector led a hand-to-mouth existence.

According to the Centre for Monitoring of the Indian Economy (CMIE), 1.5 million jobs were lost in the first four months of 2017 due to demonetization.

And the National Sample Survey Organization found that 94 per cent of 470 million Indian workers are part of the un-unionized sector.

More than 330 million of them live in villages.

The church labor group’s meeting noted that there had been further livelihood impacts from the goods and services tax, not least on local artisans, small-scale entrepreneurs and rural producers.

Some 90 million artisans and weavers are demanding a GST waiver.

The annual meeting also urged the government enact a law to protect the rights of women workers in the unorganized sector.