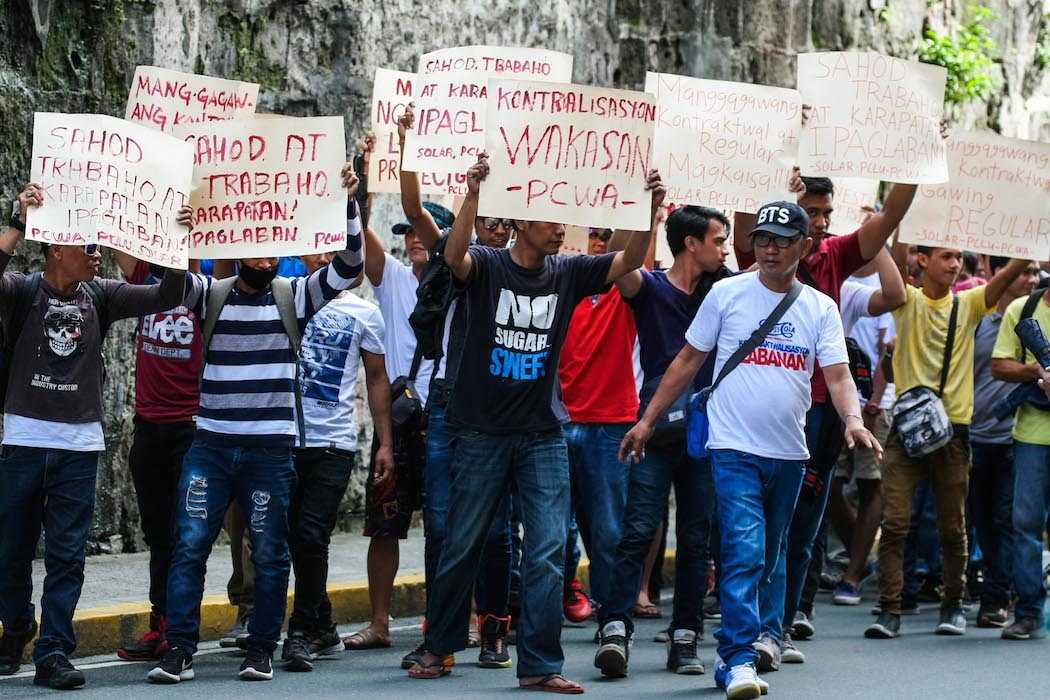 Workers of a leading soft drink manufacturer walk out of their workplaces in Manila on June 18 to protest low wages and labor-only contracting. (Photo by Jire Carreon)

Church groups and university students in Manila have launched campaigns this week in support of at least half a dozen labor strikes around the Philippine capital.

The Catholic group Council of the Laity of the Philippines has issued a call of support for striking workers of a US$360-million food conglomerate.

The call has been viewed by many as a signal of growing disenchantment with President Rodrigo Duterte's economic policies.

At the heart of the unrest is Duterte's campaign pledge to put an end to the so-called labor-only contracting scheme, which has been blamed for the lack of employment tenure among many workers.

In a statement, the Council of the Laity said it is supporting the initiative of the Church People-Workers Solidarity group's call for ecumenical prayers and solidarity missions on picket lines.

The groups also urged people to visit striking workers and their families and bring food, medicine, and other basic needs.

Priests, nuns and seminarians have already signed up to join a caravan this weekend heading to a strike at a factory owned by a food company called NutriAsia in Bulacan province, less than a hundred kilometers north of Manila.

Students groups and urban poor organizations have also reinforced striking workers following a June 14 police dispersal that injured more than a dozen activists and landed 23 others in jail.

Protests have also broken out in factories of a multinational soft drinks firm, a global brand of biscuits and sweetbreads, the country's top telecommunications company, a manufacturer of canned sardines and a fast-food chain.

Discontent has also spread to the public sector with government workers also set to launch a campaign against labor contractual schemes that deprive more than half a million of them of job security and benefits.

Despite the repeal of a law against vagrancy, police arrested early this week more than 5,000 people, dragging them off to already overcrowded police cells.

Those who tried to protest were threatened with bodily harm.

At least one arrested person, Genesis Argoncillo, 22, died after suffering what doctors described as "multiple blunt force trauma to the neck, head, chest, and upper extremities."

Police, claimed he was mentally disturbed and that the wounds were self-inflicted.

Police have since changed their story, saying he died of "the effects of congestion" in the police detention center.

Despite the outcry, police said they would continue arresting street loiterers in Manila, which has more than half a million informal settler families, or about three million people living in congested communities, sometimes in multi-family shanties with little ventilation.

The sight of entire families huddled on stoops and sidewalks for air is a familiar sight in the city.

Duterte snapped back at human rights groups for criticizing his order. "Do not tell me what to do," he said, insisting that the police would continue to crack down on loiterers.