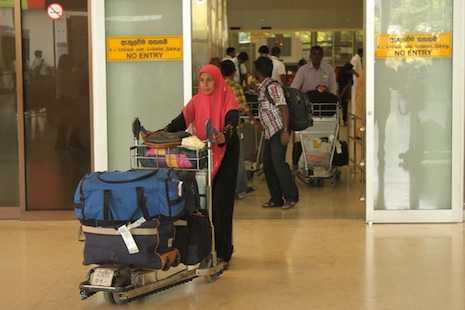 An overseas domestic worker arrives back home in Colombo

Saudia Arabia has long been a beacon of hope for many Sri Lankans who flock there to pursue a higher salary and a better life than they would otherwise get at home.

About 1.8 million Sri Lankans live and work abroad, and about 90 percent of them do so in the Middle East – accounting for foreign exchange income of US$5.2 billion last year.

For many economic migrants, though, the promise of a brighter future does not materialize.

Mary Margaret, 32, spent six years in the Middle East as a housemaid, dreaming of earning enough money to build a home for her three children.

“I chose to go abroad as a housemaid because we had no other way of earning money. I laid a foundation for a new house six years before but could do nothing thereafter,” she said.

Mary says unethical employment brokers, high rates of abuse at the hands of employers and non-payment of wages has made workers from Sri Lanka and elsewhere desperate.

Some have even fled their employers to take their chances on the streets, and a growing number of them have taken shelter beneath the Sarbia bridge in Jeddah – where Mary lived for several months before returning home penniless.

“There were Sri Lankans, Bangladeshis and Malaysians who faced inhuman situations that came to live with me at the bridge. We had neither money nor food. We looked to passersby to offer us something to eat,” she said.

Mary adds that there are about 1,200 Sri Lankans living under the Sarbia bridge.

According to government data, about 120,000 Sri Lankan women who leave for work in the Middle East return prematurely for reasons that include physical or sexual abuse, nonpayment of salaries and forced prostitution.

Hundreds became pregnant during their stay, often after being raped by their employer or a family member.

For those living under the bridge, the lack of food and money are not the only risks they face.

Having abandoned their employers as well as their passports, they have become illegal immigrants as far as the Saudi and Sri Lankan governments are concerned.

Opposition lawmaker Ranjan Ramanayake, who works as an advocate for Middle East migrant workers, says the circumstances for such workers is untenable and blames Sri Lankan authorities for not showing the political will to help them.

“These people are not illegal workers. They have left Sri Lanka with valid documents,” Ramanayake says.

“The job agencies promise these innocent people employment as domestic helpers, drivers and garment factory workers, but in the end the people end up as laborers in huge animal farms,” he said.

“When they cannot work in them, these people leave those places, come to the streets and find shelter under the bridge because there’s no one to help them. The sad thing is they leave behind their passports and other documents with their employers.”

Many migrant workers see life on the streets as being much safer than remaining with abusive employers.

In a recent much-publicized case, LG Ariyawathi returned to Sri Lanka from Saudi Arabia with indisputable signs of torture.

Doctors removed 13 nails and five needles from her body when she arrived home.

Ariyawathi said her employers punished her by heating the nails and needles and driving them into her body.

In January, Rizana Nafeek was executed after being convicted of killing her employer’s infant in what many see as an accidental death.

Following the execution, Sri Lanka raised the minimum age of housemaids seeking overseas work to 25. Nafeek was only 17 when she left for Saudi Arabia in 2005.

In the wake of the execution, the main opposition United National Party tabled a no-confidence motion against Dilan Perera, minister for foreign employment promotion and welfare. The motion was defeated earlier this month.

Sri Lankan authorities say, nonetheless, that they are taking steps to discourage workers from going to the Middle East, given the numerous accusations of abuse, but fear that many will continue to try their luck with promises of high salaries.

“We are trying to discourage them from going there looking for employment. We do this by providing them with self-employment opportunities,” said Tissa Karalliyadde, minister for child development and women’s affairs.

“In the Middle East, a woman may earn 30,000 rupees per month. But we show them that they can earn more than half that sum being self-employed here."

Karalliyadde says the government has initiated a livelihood assistance program that offers grants of up to 50,000 rupees to selected families in need to start their own businesses.