Pope Francis holds the holy bread as he celebrates the Eucharist during a Mass as part of World Youth Day on Nov. 22 at St. Peter's Basilica in the Vatican. (Photo: Vincenzo Pinto/AFP)

Pope Francis has urged young economists and entrepreneurs to work not only for the poor but with the poor.

Addressing participants of the Economy of Francesco online event in Assisi, Italy, he said: “Let us, then, not think for [the poor] but with them. Let us learn from them how to propose economic models that will benefit everyone.”

The Economy of Francesco, an initiative by the Vatican Dicastery for Promoting Integral Development, was held from Nov. 19-21. It aims at forming 2,000 young economists and entrepreneurs from around the world to “build a more just, fraternal, inclusive and sustainable economy today and in the future.”

The pope recalled that the original idea was to meet in Assisi. Due to the Covid-19 pandemic, the meeting was postponed and eventually held online.

In a video message Pope Francis told participants: “We are speaking of a conversion and transformation of our priorities and of the place of others in our policies and in the social order.”

The pope urged them to help change production systems and consumption patterns to convert them into more sustainable models.

“We need to accept structurally that the poor have sufficient dignity to sit at our meetings, participate in our discussions and bring bread to their own tables,” he said.

The pope urged young adults to “not be afraid to get involved and touch the soul of your cities with the gaze of Jesus.”

“No shortcuts! Be a leaven! Roll up your sleeves!” he emphasized.

Quoting St. Pope Paul VI, Francis said: “Development cannot be restricted to economic growth alone. To be authentic, it must be well rounded; it must foster the development of each person and of the whole person … We cannot allow economics to be separated from human realities, nor development from the civilization in which it takes place. What counts for us is man, each individual man and woman, each human group, and humanity as a whole. 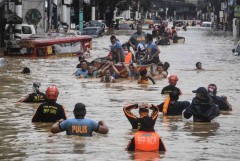 “A time that reminds us that we are not condemned to economic models whose immediate interest is limited to profit and promoting favorable public policies, unconcerned with their human, social and environmental cost.”

Too many people are suffering from the social and economic crisis, noted the pope.

The pope said it’s time to shun economic models that are concerned only with profit.