Pilgrims throng Sabarimala Temple in southern Kerala for a program on Dec. 27, 2012. India's Supreme Court has revoked a ban on women visiting the temple. (Photo by IANS)

Church leaders in India have expressed reservations over the Supreme Court revoking a ban on women entering a southern temple, ending its centuries-long tradition.

India's top court on Sept. 28 ruled that the ban was against the sex equality guaranteed in the constitution and ended the ban on women of menstruating age between 10 and 60 from entering the 12th century Sabarimala Temple in Kerala.

"The court's interference in the affairs of a religion does not seem the best," said Bishop Theodore Mascarenhas, secretary-general of the Catholic Bishops' Conference of India.

Several Hindu groups are also upset with the court verdict against the age-old tradition of the hilltop temple that attracts some 50 million visitors annually.

The temple's deity Ayyappan is believed to a bachelor and customarily the temple has banned women, purportedly considering menstruating women as impure.

The Travancore Devaswom Board, the temple's administrative body, is planning a petition to review the order that came after a 20-year legal wrangle. Board president A. Padmakumar told media that the order disappointed them but they will file a review petition.

Leaders of several Hindu groups claim that the court order does not respect the sentiments of Hindus and their belief system attached to the temple. They say the practice is limited only to this particular temple and women are allowed in all other temples.

"The worst affected from this order is the Hindu religion, which is highly tolerant and accommodative," Bishop Mascarenhas said.

However, the court judges observed: "Notions of purity and pollution which stigmatize individuals have no place in a constitutional order."

Dissenting female judge Indu Malhotra in her note said "issues of deep religious sentiments should not be ordinarily interfered by the court ... Notions of rationality cannot be invoked in matters of religion." 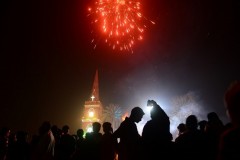 "When it comes to faith, it may not be so rational as it is one's relations with God. Such practices cannot be treated as cases of gender discrimination," he said.

"There is no need to disturb the centuries-old practice as any kind of violation and discrimination. Certain religious practices may not be so rational but they are part of faith and have continued for centuries."

The communist-led government in Kerala favored the entry of women of all ages when the court sought its opinion in 2007.

The Indian Young Lawyers Association, which moved the petition, said the ban discriminated against women and violated the principle of equality.

Sabarimala, billed as the world's largest Hindu pilgrim center, welcomes people of all castes. Pilgrims track a forest path to the temple dressed in black after leading an ascetic life for 41 days as part of a custom.