Women want India to do more to popularize sanitary pads

Only half of menstruating population use branded products, others rely on cloth or even dried leaves posing cancer risk The Myna Mahila Foundation helps disadvantaged women from Mumbai slums access cheap sanitary pads and campaigns to end taboos surrounding menstruation in the conservative Asian country. Here employees pose for a photo at their office in Mumbai on April 10. (Photo by Indranil Mukherjee/AFP)

India has exempted brand-label sanitary pads from being taxed to make them affordable, but more action is needed to propagate their use among millions of Indian women, campaigners say.

A 12-percent tax was added to sanitary napkins in July 2017 but Finance Minister Piyush Goyal said on July 21 that this was being revoked to promote their widespread use in economically disadvantaged communities and households.

Sarita Sharma, a physician based in the northern state of Jammu, said axing the tax "will go a long way" to encouraging more women to use them.

Among the estimated 355 million women who menstruate once a month, the use of sanitary pads is not common among those who live in rural areas, according to the government's latest National Family Health Survey (2015-16).

It found that 48.5 percent of women who live in villages regularly use sanitary napkins compared to 57.6 percent in cities.

The rest use cheaper alternatives that are considered unhygienic and potentially dangerous including pieces of cloth, plastic, sand and even dried leaves.

Sharma said unhygienic practices in managing menstruation have a high risk of leading to cervical cancer, which can be fatal.

Such practices are also considered a key factor behind the 70-percent spike in reproductive tract infections in recent years, she said.

"The problem is that using a sanitary pad is still considered taboo in rural parts of the country, and menstruation is viewed as a punishment God has given to women for some unknown sins," she said.

The doctor said many villagers are so ignorant on these matters they bar their daughters from going to school when they have their first period. 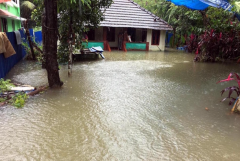 "Studies show that 25 percent of families in rural areas keep their daughters away from school when they start menstruating," she said. "And nothing has been done to eradicate this ignorant practice." Indian students hold posters and sanitary napkins during a protest over a 12 percent tax on sanitary pads as part of the Goods and Services Tax in Kolkata in this June 16, 2017 file photo. (Photo by Dibyangshu Sarkar/AFP)

A study by the Bill Gates Foundation last year found a whopping 71 percent of girls in India were clueless about what menstruation was before they experienced their first period.

It said this lack of awareness triggers huge feelings of anxiety, fear and even guilt when their period comes because they don't understand what is happening.

"The majority of women and girls in India use homemade products to manage their menstruation. Commercial pads are expensive for low-income users, and low-cost pads vary in reach and quality," the study found.

Anil Agarwal, a rights activist based in Uttar Pradesh, said a lack of comprehensive sex education is another issue.

"In class they focus on the biological aspects of puberty but there is a very limited focus on the psychosocial side of things."

Removing taxes is not enough, he said. It requires a change in people's mindset.

"The trick is how to make sanitary pads appeal to those who are reluctant to use them, or who view them as a luxury item for rich people," Anil said.

According to research by the India America Foundation in 2014, limited access to functioning toilets is another barrier that has a negative impact on menstruating girls and women.

It said 40 percent of government schools lack separate toilets for boys and girls. Moreover, 53 percent of households in India don't have a private toilet, meaning women must use shared or communal facilities.

The foundation said these shared toilets may be far from their living quarters, putting them more at risk of sexual attacks.

"Menstruation isn't something that's openly talked about in Indian households. It's not easy for a young woman to walk into a shop and buy sanitary pads [due to social taboos]," said Anaji Bharti, a New Delhi-based women's rights activist.

"For example, a village girl couldn't just walk up to her local shopkeeper and ask for a pad [out of shame]," she said. "That's the reality and something needs to be done about it."

She urged the government to run national campaigns aimed at raising awareness about menstruation.

It should also build more public toilets and make sanitary napkins readily available — and de-stigmatized — "so women aren't subjected to mental torture when they have their period," she said.

Geeta Nair, a social activist based in Lucknow, the capital of Uttar Pradesh, suspects the government killed its sanitary towel tax as a populist measure to win over voters ahead of next year's election. The government wants "to appease women" before the April poll, Nair said.