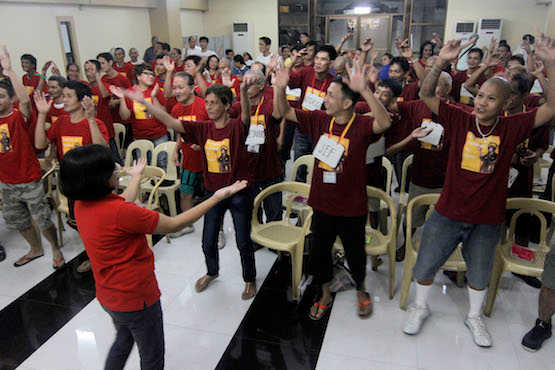 At the San Roque de Manila parish church in a poor district of Manila, a group of women are helping drug users find hope.

The women taught the former drug users how to make candles, liquid soap and even meat products that they can later sell.

"This is a better way," said Rebecca Lopez, a 66-year-old breast cancer survivor who volunteered to serve food at one Wednesday evening meeting.

"They are really striving to change," she said of the men and women who were present at the weekly rehabilitation sessions.

A man approached Rebecca for another serving of food. He wanted to bring food to his grandson who was left at home.

The poor grandfather was one of more than a million people who surrendered to the police after Philippine President Rodrigo Duterte launched an intensified campaign against illegal drugs.

The women at San Roque de Manila parish said the anti-narcotics war is biased against the poor.

Kate Esguerra, a university student of volunteered at the parish, said that only the poor and small time drug peddlers have surrendered or been killed.

Out of the 70 people Kate encountered at the parish program only four have regular jobs. Rochelle Valerie Fanuncio, another student, noted that many of those who undergo the program turned to drugs because of problems at home or with relationships.

"Drug use has become their way of running away from their worries," said Rochelle.

"We have to comfort them," said 20-year-old Hazel Cabal. "As women, we have the capacity to comfort, we are gentle-spirits," she said.

"Words of comfort are important for those struggling to fight addiction," added Hazel.

Kate said she is also learning from her volunteer work.

Drug users need to feel at home, she said. Many of them may be physically present in their homes or communities "but are made to feel like they are not important."

This week, the country's national police force launched what they described as a "less bloody" campaign against narcotics.

"If possible, it will be a bloodless campaign," said National Police Chief Ronald de la Rosa. "But this is war, so it might just be less bloody," he added.

"We are not here to claim lives, we are here to save lives," said the police chief, adding that part of the new campaign is the rehabilitation of those who will surrender.

De la Rosa said the campaign is aimed at "saving the users and jailing the pushers if needed."

Much can still be done, said the women volunteers at San Roque de Manila parish church.

For one, funds for the rehabilitation of drug users is needed. Alternative livelihood programs must also be given attention.

"Help them make those candles. Help them be productive," said Rebecca.

The women volunteers recognize that ending the drug menace in the country is difficult, but the war should be fought on the frontline.

Rebecca, who has been serving the parish since 2005, said understanding the life experiences of the victims is a first step.

"There is hope if we rely on rehabilitative measures instead of the barrel of a gun," she said.

Nearly 8,000 suspected drug users and dealers have already been killed in the past eight months of the government's anti-illegal drugs war.