A lack of females holding political power is an obstacle to the country becoming a just and equitable society, UN warns Former Thai prime minister Yingluck Shinawatra shows her ballot during the constitutional referendum in Bangkok on Aug. 7, 2016. Thailand's only female PM was ousted in a coup in May 2017 and fled the country in September that year while facing charges of negligence in a rice subsidy scheme. Many believe the charges were politically motivated. (Photo by Borja Sanchez-Trillo/AFP)

Thailand has one of the world's lowest rates of women serving in key government positions, indicating the country has a long way to go in empowering women politically, according to the United Nations Entity for Gender Equality and the Empowerment of Women (U.N. Women).

As of January 2017, the U.N. agency says, women accounted for a mere 4.9 percent of representatives in the country's parliament, earning Thailand 184th place out of 190 nations ranked globally based on their levels of female representation in primary political decision-making.

Globally, women on average hold 22 percent of national parliamentary positions. Even in neighboring Cambodia, a comparatively underdeveloped nation, the number of women serving in parliament is four times that in Thailand with a rate of 20.3 percent.

In tandem with being largely under-represented in political decision-making, Thai women have often also been on the receiving end of endemic gender-based violence, particularly sexual violence and domestic abuse.

Several senior U.N. officials have said the political disempowerment of women is posing an obstacle to Thailand becoming a just and equitable society.

"Equal political participation of women and men is an important condition for good governance and effective democracy," Pirkka Tapiola, the European Union's ambassador to Thailand, said in a statement.

"It can help improve the lives of women and men, bring more equitable societies and inclusive governance, increase standards of living, enhance positive development in education, health and infrastructure, and reduce political corruption."

Warisara Ampornsiritam, a research and development officer at King Prajadhipok's Institute in Bangkok, concurs. "From experiences in local development, it is clear that the mindset and perspectives of women are absolutely vital to problem-solving and development," Warisara said last week at a U.N. Women-sponsored seminar in Bangkok.

Despite the many freedoms women enjoy in the freewheeling, predominantly Buddhist nation, Thai society remains largely patriarchal. Women rarely occupy key managerial positions — save for a select few who come from wealthy and well-connected families. Thailand teeters on the brink 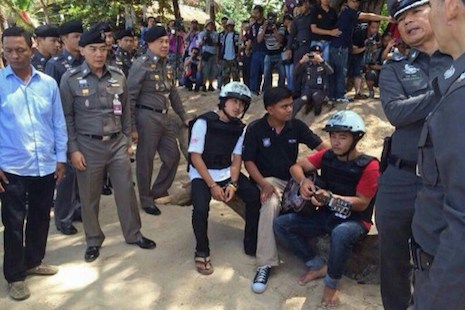 Thailand has also had few women in important positions of political decision-making. The country's first and only female prime minister in its history, Yingluck Shinawatra, was ousted in a military coup in May 2014. The army generals behind the coup have been in power ever since, stifling most forms of dissent.

Prior to the coup, anti-government demonstrators regularly shouted misogynistic chants at the female prime minister while carrying signs with sexist overtones during rowdy street protests.

In September 2017, Yingluck fled Thailand while facing charges of negligence in her government's rice subsidy scheme aimed at helping hard-up farmers. The ex-PM, who remains in self-imposed exile abroad, was convicted in absentia to five years in prison in what numerous observers have described as a politically motivated case.

"At the top my country has always been an old boys' club," a female rights activist in Bangkok, who asked to remain anonymous for fear of reprisals, told ucanews.com.

"It's always been men with money and men with guns [who have ruled the country]."