Women clad in black, body-covering chadors on streets of Zahedan in the southeast were seen chanting in videos posted on Twitter 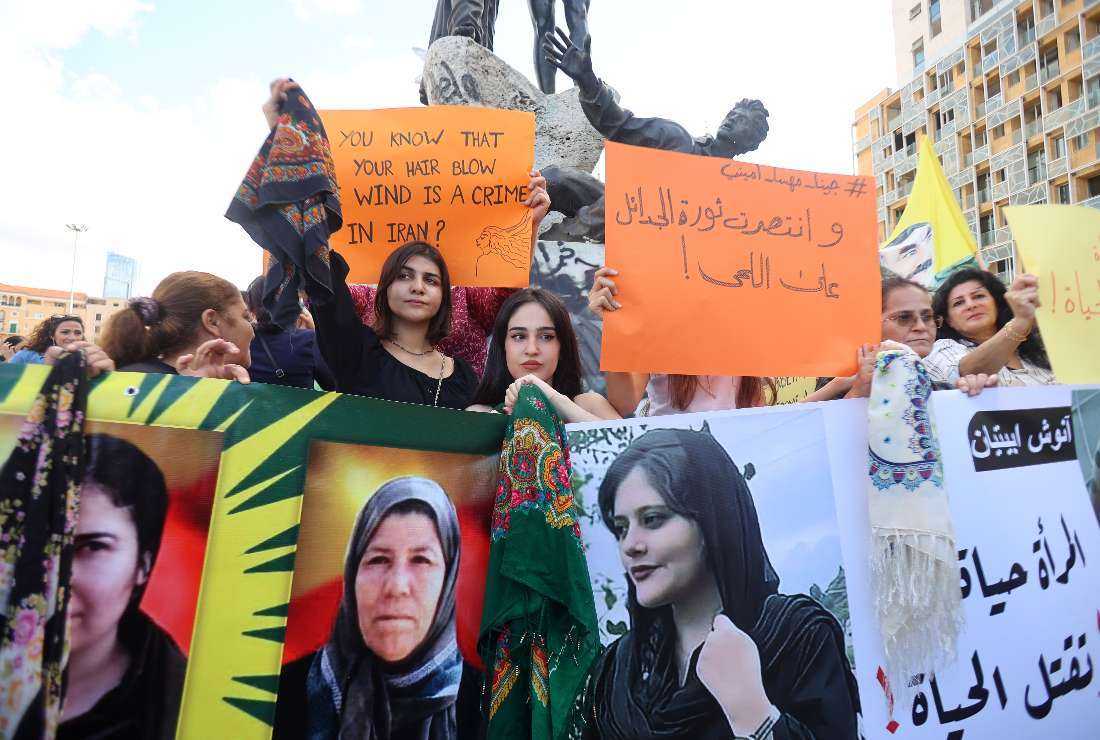 Kurdish and Lebanese women take part in a rally in the downtown district of the capital Beirut on Sept. 21 days after the Iranian authorities announced the death of Mahsa Amini, who had been held in the capital Tehran for allegedly wearing a hijab headscarf in an "improper" way. (Photo: AFP)

Black-clad women in Iran's Sistan-Baluchistan province on Friday joined nationwide protests sparked by Mahsa Amini's death, in what a rights group called a "rare" move in the staunchly conservative region.

Online videos showed dozens of women on the streets of the provincial capital Zahedan holding banners that declared "Woman, life, freedom" -- one of the main slogans of the protest movement that erupted in mid-September.

"Whether with hijab, whether without it, onwards to revolution," women dressed in body-covering chador garments chanted in videos posted on Twitter and verified by AFP.

Women-led protests have swept Iran since Amini, a 22-year-old Iranian of Kurdish origin, died following her arrest in Tehran for an alleged breach of the Islamic republic's dress code based on sharia law.

Security forces have killed at least 448 protesters, with the largest toll in Sistan-Baluchistan on Iran's southeastern border with Afghanistan and Pakistan, according to Iran Human Rights, an Oslo-based non-governmental organisation.

"It is indeed rare," IHR director Mahmood Amiry-Moghaddam said of the protests by women in Zahedan, which has seen men take to the streets after Friday prayers for more than two months.

"The ongoing protests in Iran are the beginning of a revolution of dignity," he told AFP.

"Women and minorities, who have for more than four decades been treated as second class citizens, are empowered through these protests to come out to the streets and demand their fundamental human rights."

Baluchi women were among the "most oppressed" in Iran and their protests were the most organised by them so far since demonstrations broke out across the country, Amiry-Moghaddam added.

Security forces were seen opening fire with bird shot and tear gas on male protesters in Taftan, a locality in Sistan-Baluchistan, in a video published by IHR.

At least 128 people have been killed in Sistan-Baluchistan during the protest crackdown, according to IHR, by far its biggest toll for deaths recorded in 26 of Iran's 31 provinces.

More than 90 of them were killed on September 30 alone -- a massacre that activists have dubbed "Black Friday".

Those protests were triggered by the alleged rape in custody of a 15-year-old girl by a police commander in the province's port city of Chabahar.

Analysts say the Baluchi were inspired by the protests that flared over Amini's death, which were initially driven by women's rights but expanded over time to include other grievances.

"The Baluchi minority have borne the brunt of the vicious crackdown by security forces during the uprising that has swept across Iran since September," Amnesty said in a statement.

The second province on IHR's list is Amini's home province of Kurdistan on Iran's western border with Iraq, another epicentre of the protests with a Sunni majority, where 53 people died.

Iran accuses its arch enemy the United States and its allies Britain and Israel of fomenting what it calls "riots".

State news agency IRNA on Friday reported that authorities had summoned foreign diplomats 12 times since the protests erupted "in reaction... to unprecedented pressure" imposed on the Islamic republic by their countries.

Foreign Minister Hossein Amir-Abdollahian meanwhile complained, in a phone call with UN chief Antonio Guterres, about "actions carried out by the United States and other Western countries to incite riots in Iran", IRNA said.

Iran has blamed protest-related violence in Kurdistan on separatists, and has repeatedly launched deadly cross-border strikes on Kurdish groups exiled in Iraq.

An Iranian general said this week that "more than 300 martyrs and people" have been killed in the unrest.

Thousands of Iranians and around 40 foreigners have been arrested during the demonstrations and more than 2,000 people have been charged, according to the country's judicial authorities.