Women deacons and the shortcomings of history 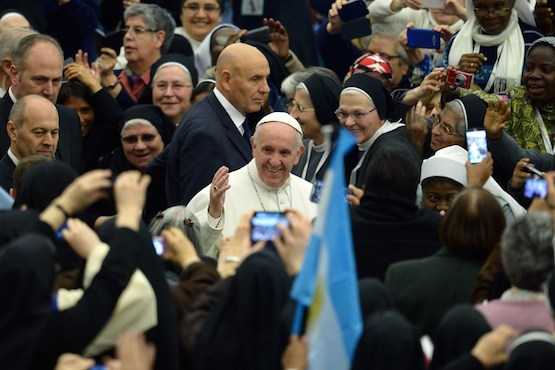 Pope Francis greets nuns as he arrives for a meeting with religious for the conclusion of the Year of Consecrated Life Feb. 1 at the Vatican. (Photo by AFP)

One of the biggest questions surrounding the "Francis revolution" concerns the issue of women in the church.

Many Catholics in certain parts of the world believe this is the litmus test of Catholic Church reform. Since Pope Francis agreed several weeks ago to create a commission to study the history of women deacons, a new discussion has begun on an issue that many feared had been closed forever by John Paul II.

Francis made the announcement on May 12 in response to a question asked during an audience with some 900 leaders of the world's congregations of Catholic women religious. It was an impromptu answer and, therefore, it is difficult to say what will come of such a study commission. Much will depend on the commission's composition and its agenda.

If it is just a commission to investigate the history of women deacons, advocates of the female diaconate should not expect important developments. The enthusiasm that followed the announcement demonstrates a naive belief that finding or even agreeing on the historical evidence of the existence of women deacons in early church history can solve the issue. But this kind of appeal to history is rarely conclusive in theological debates and can easily backfire. It could become the progressive version of traditionalism in the sense of legitimating something in the church only because it is not new.

The big issue here (and not only for the issue of the woman diaconate) is what role history plays and should play vis-a-vis the idea of the tradition of the church. As a historian I believe church history is crucial for an informed debate on big issues in the church. For example, you cannot debate about family and marriage today without having an idea of its complicated history in society and in the church.

Having said that, there are at least three reasons why we should not get too excited about a commission investigating the history of women deacons.

The first reason is the difference between tradition and history. Tradition is not just historia. History is in the past, while tradition is dynamic and open to the future. Tradition can and sometimes must be “invented,” while inventing history is simply forgery.

The list of differences between tradition and history could go on and on. But from a practical point of view, if we use history to validate or invalidate an aspect of the church or ministry, the consequences could be unpredictable. For example, if we had to restructure all the ecclesial ministries following what we know about their history in the early church, we should get rid of the notion that bishops are successors of the apostles — which is much more a theological notion than a historical one.

The same is true for the model of priesthood, of monastic and religious orders, of new lay movements and of the Roman Curia. Much of what all these are today is different from what they used to be. All ministries in the church are a mix of a previous historical model and of a theological and dynamic understanding of ministry.

In the ecclesiological debate that led to the constitution Lumen Gentium (and other documents), the council fathers looked at a particular period of history they believed as provided a path of reform for the future church. It was the patristic age (church fathers), which dates from the early Christian centuries until the big shift that takes place between the imperial church of Charlemagne in the ninth century and the Gregorian church at the end of the 11th century. This was an undivided and less institutionalized church, more collegial and less monarchical, with a certain kind of freedom vis-a-vis politics and ideology.

This patristic model helped reframe the ecclesiological debate around the papacy, the episcopate, and the bishops' conferences. But it did not work for other key issues, for example interreligious dialogue and especially for the relations of the church with the Jews.

The Vatican II declaration on non-Christian religions, Nostra Aetate, is the best example of the uselessness of history in some cases. One of the leading experts on this conciliar text, Piero Stefani, recently pointed out on his weekly blog post the risks of trying to use history as the way of solving the issue.

Nostra Aetate does not look back at history to find legitimacy in that past. In fact, it does just the opposite. It does not quote any ecclesial or magisterial source, not even the fathers of the church, and it does not investigate the history of Catholics’ attitude toward Jews (not only because it would have been embarrassing or too complicated for a brief council document).

Nostra Aetate quotes from Scripture, and paragraph four simply affirms that anti-Judaism is against the Gospel because hatred of the Jews is hatred of Jesus. In other words, the theological argument is much stronger than the simple historical argument when the church faces new issues.

The third reason is the relationship between past church history and the current global dimension of the church. The more we know about the history of the church, the more aware we become of the very diverse set of experiences in all its aspects in different areas of the world at any given time.

Prospectively, this means that it is increasingly difficult to identify aspects of church life that we know existed in the past and then try to transport them to the church in our times and in the future. This is even truer considering the radically global dimension of Catholicism today. What this means is the historical model of women deacons may be relevant for today’s church in some parts of the world, but not necessarily for other. That’s because a major factor is the role of women in these societies today, not 10 or 15 centuries ago.

We had women deacons in the distant past of the church. But this is not why I am in favor of women diaconate today. It is not a problem of history. Ignorance of church history makes things worse, but historical evidence is not the silver bullet — unless we believe in a purely archeological ecclesiology.

The appeal to history is very important for church reform, but it is not definitive and it does not solve issues that must be dealt with theologically. Should we have women deacons because we had them already many centuries ago or because we think their ministry must be valued in light of the call to be carriers of the Gospel in the world of today?

This is a new theological and ecclesiological issue. The way Vatican II dealt with new issues 50 years ago can help us understand how we must deal with this and other new issues today. It is not about finding and recreating continuity with the past — unless we want to face the obstacle that John Paul II, in the very recent past, put before any change the church might wish to explore for the role of women in the church.