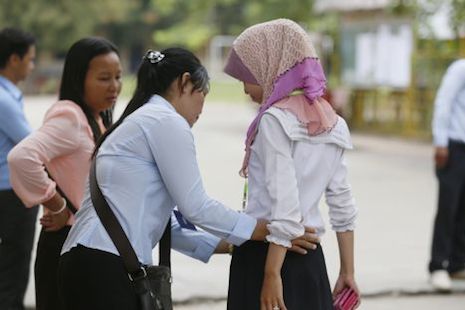 For Cambodia, there is no disguising how dreadful the results of this year’s high school graduation exams were: three in four students of the some 90,000 who sat their finals in August failed, and just 11 students scored an A grade.

The reason for the high failure rate was simple: for the first time in years, authorities enforced a strict “no cheating” policy. In prior years, many students purchased papers from teachers and vendors ahead of time, brought cheat sheets and mobile phones into exams, or simply paid someone else to take the test for them.

This time every student was frisked, IDs were checked and invigilators were themselves watched by anti-corruption officers. The new policy shouldn’t have come as a surprise — the students were warned months in advance that cheating would not be tolerated — but many didn’t take it seriously. Among them was 18-year-old So Lynda.

“I didn’t really believe it would happen,” she told ucanews.com. “But we had invigilators inside [the exam room] and we were checked at the school gates. And even though I managed to take in a cheat sheet, I wasn’t able to look at it.”

The government, as shocked by the results as the students, then said all those who had failed could retake their exams in October. Yet despite having nearly two months to prepare, fewer than one in five of the 60,000 students who sat round two managed to pass the exam.

Overall, around 40 percent passed their school finals this year, less than half the figure in 2013.

The result speaks volumes: the shortcomings in Cambodia’s education system mean most students who get as far as Grade 12 have an education so inferior that, absent cheating, they can’t pass their finals. Many students drop out long before Grade 12.

Years of underfunding lie at the heart of the matter. For one thing, the lack of budget means teachers are underpaid leaving many unmotivated. Some extort money from their students; others take on second jobs. Funding shortages mean schools lack books and equipment, and also make it harder to fill teaching posts in rural areas, where 75 percent of the population lives.

Minister of Education Hang Chuon Naron says this year’s results were a turning point. The polyglot minister — he speaks English, Russian and French in addition to his native Khmer, and holds a doctorate in economics — took over the post in late 2013 after a decade as a deputy minister in the Ministry of Economy and Finance.

“The learning outcome was lower than expected, but that also gives us some ideas about how to fix the whole system,” he told ucanews.com. “So now we can address issues one by one after we identify them.”

What the ministry has identified constitutes wholesale reform of education. Among the issues targeted: improving teacher training and the quality of education; boosting young people’s skills — particularly in mathematics, science, critical thinking and problem solving; tackling the management of finances; and improving the governance of schools.

All that costs money in a system that, by any measure, is underfunded. Yet that too is starting to change. The draft budget for 2015 allocates nearly US$400 million for education, a $60 million increase; Chuon Naron said the bulk of that increase would go towards boosting teachers’ salaries.

While the amount teachers are paid is climbing, it’s from a low base. In August, the government said salaries of the lowest-paid teachers would rise from $105 to $138 a month. By next May, said Chuon Naron, that would increase to $160. The government is also mulling other incentives to attract “the best and the brightest” to the profession, including an education allowance to increase what teachers earn relative to other civil servants.

Even with next year’s boost, the total spent on education will be just 2.5 percent of 2015’s projected $16 billion GDP, or around $140 for each of Cambodia’s 2.9 million pupils. That’s around half the 4-6 percent figure UNESCO recommends, and far lower than the proportion spent by Cambodia’s more dynamic neighbors Vietnam and Thailand.

Chuon Naron prefers another measure: the amount spent on education relative to total expenditure. On that score, he said, Cambodia fares better: 16.4 percent this year rising to 17.3 percent next year. The goal is 20 percent.

Cambodia’s failings in education, which are no surprise to many parents and students, were the subject of a comprehensive report earlier this year by Srinivasa Madhur, the director of research at the Cambodia Development Research Institute.

While Madhur acknowledged that Cambodia has made great strides since 1979, the year Pol Pot’s murderous Khmer Rouge regime was driven from power leaving a devastated nation, he warned that without key improvements — getting more children to remain in school and ensuring they receive a quality education while there — it will remain stuck in its deleterious low-wage, low-skill cycle.

Madhur’s report — Cambodia’s Skills Gap: An Anatomy of Issues and Policy Options — noted that the country’s ratio of 46 primary school pupils to every teacher was the worst in the world outside Africa, and compared terribly against even the second-worst in ASEAN — Myanmar, whose ratio is 28 pupils per teacher.

The solution? Not merely more teachers, “but also better teachers”, a goal that would be more easily accomplished by bringing in foreign teacher trainers given the dearth of suitably qualified local staff. What works elsewhere — training teachers well, paying them properly and making sure they do their jobs well — ought to work in Cambodia.

Madhur also made clear the cost of the problem: Cambodia’s education system is the cause of a growing gap between what employers need and what candidates are able to offer. A “business-as-usual approach” isn’t an option, he wrote; given it will take years before changes made now have an impact, the time to act is now.

If the efforts underway at the ministry are any indication, it seems that the government gets that message. Chuon Naron said a key goal is to make education “responsive to economic development — to the skills demanded by employers, by investors”.

These challenges, of course, aren’t only Cambodia’s. In March, UNESCO warned of “a global learning crisis” that saw one in four pupils in the poorest countries unable to read even a sentence. The UN’s education body said the solution lay in governments providing sufficient trained teachers and focusing “their teacher policies on meeting the needs of the disadvantaged”.

“This means attracting the best candidates into teaching; giving them relevant training; deploying them to areas where they are needed most; and offering them incentives to make a long-term commitment to teaching,” UNESCO said. “[Governments] must make sure every child is not only in school, but learning what they need to learn.”

The signs are that Cambodia’s Class of 2015 has worked out what the Class of 2014 did not: they need to apply themselves if they want to succeed. Outside her high school in central Phnom Penh, 17-year-old Horn Socheata, whose ambition is to study banking at university, said the fate of those a year ahead had been a wake-up call.

“All the students in Grade 12 are in a panic, and they plan to study hard,” she said. “But as long as I study hard, I’m not worried about failing. I will spend at least an hour or two each day studying. And that’s something I didn’t do before.”

Socheata’s classmate, Chuon Chan Sreypich, welcomed the new policy because “when we learn a lot, then we know a lot and it will be easier to get a job”.

For her part, So Lynda, who failed both rounds of exams this year, hopes a renewed effort will pave the way to one day landing a job: she decided to retake Grade 12 and is determined to do better.

“I’m going to study hard, take more tutorial classes and spend more time reading,” she said. “But if I fail again this year, then I will give up.”