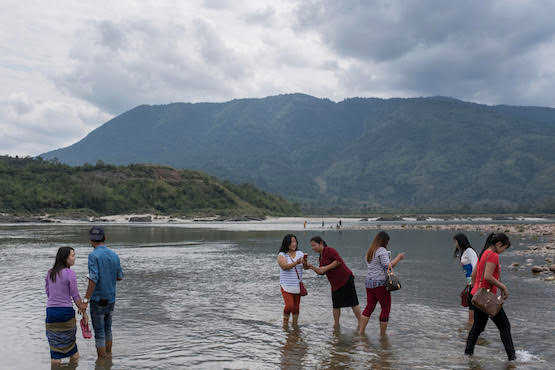 Visitors wade in the Irrawaddy River at the confluence in northern Kachin State, Myanmar. The joining of both the Malikha and Maika Rivers sees many visitors each year and is of both historical and cultural significance to the Kachin people. (Photo by Cory Wright)

Lu Ra, an ethnic Kachin woman, returned to her native Tangphre village after she was forced to leave to make way for the construction of Myitsone Dam. Reclaiming her land, she built a new house there in 2016.

"I wanted to challenge the Chinese developer and the government so I built a house on my own land where my family has lived for generations. I will not leave it again no matter how much pressure I face from local authorities," Lu Ra, who is a Baptist, told ucanews.com.

The 53-year-old said she couldn't return to her village and build her house until late 2015 as the local authorities were putting pressure on her and other villagers to stay away even though the dam project was suspended in 2011 by Myanmar's former military-backed government.

"I have no fear and will continue to fight for the complete halt of the dam project," said Lu Ra, a mother of five.

To make way for the dam project, around 2,000 people were forcibly moved from five villages to Aung Myin Thar: a new relocation village, in 2010. However, the people soon complained the new location was rocky and poor for farming.

Even though Chinese developers built a Catholic Church, Baptist Church, a 16-bed hospital and roads, several villagers were dissatisfied and returned to their respective villages near the confluence of two rivers that form the Irrawaddy River, Myanmar's main waterway.

Bernadette Ja Hkawng, a close friend of Lu Ra, frequently returns to Tangphre village to clean leaves around her house that has been empty now for six years. She showed ucanews.com her former home and plantation where her family have lived for more than 100 years.

"We didn't want to leave our native land but we were forcibly moved. We had no right to protest under the military rule [of the former government]," Ja Hkawng, a 50-year-old mother of seven said.

Ja Hkawng and Lu Ra have played leading roles in anti-dam protests and so they are under surveillance from police and local authorities. Chinese developers, who have provided rice to people in the resettlement village, stopped supplying it to the two women in 2015 due to their activism. Pillars crossing the Irrawaddy River indicate the stalled progress of the Myitsone Dam development downstream from the river’s confluence where the Malikha and Maika Rivers meet in northern Kachin state, Myanmar. (Photo by Cory Wright)

Work on the US$3.6 billion project commenced in 2008 but the military-backed government of President Thein Sein suspended its construction in September 2011 following protests and widespread environmental concerns. The issue became a major thorn in relations between the two sides as China agitated for recommencing work.

The hydro-electric dam would be the 15th largest in the world. The 6,000 megawatts of electricity it would produce is more than Myanmar's entire power grid produces at present. However, the majority would be used by China despite Myanmar being chronically short of power.

Near the dam's proposed location, a Baptist pastor has written on a rock "No Dam, No War" in red paint as a show of the Kachin community's unity against the project.

On April 7 afternoon, some security guards were seen at the entrance of the Myitsone Dam project but there was no sign of Chinese workers and equipment. There were only four cement pylons rising out of the river, an unfinished bridge, electricity towers and office buildings.

The dam is expected to flood 447 square kilometers including 47 villages near the construction site. At least 11,800 people would have to be relocated if the project goes ahead.

Villagers from Gwe Htaw village in Inngyanyan Township, Kachin State, where some 100 people live, remain wary despite the fact they are yet to be relocated.

"We are concerned that our village will be inundated and we will be moved into new relocation village if the project goes ahead. But we hope Aung San Suu Kyi's government will listen to the voice of the people," Naw Awng, an ethnic Kachin man, told ucanews.com.

Much rests on the shoulders of Suu Kyi who campaigned against the dam and will attend the One Belt, One Road Summit in Beijing in May. In August 2016, she formed a 20-member commission to review the social and environmental impacts of the project and their report is expected later this year. A village near Myitkina where locals were moved after being told their villages would be relocated shortly after the Myitsone Dam project was announced in 2007. (Photo by Cory Wright)

China has also been eyeing the deep-sea port of Kyauk Phyu in the Bay of Bengal. It is a key entry point for the Chinese gas and oil pipeline to Yunnan expected to start pumping in May.

Myanmar's President Htin Kyaw began a six-day official visit to China on April 6 and observers said the Myitsone Dam would be on the agenda. However, Myanmar president's official statement on April 11 did not mention the dam and just said Myanmar supports China's "One Belt, One Road."

China's state-run press appeared to be hedging its bets on the dam's progress with a report in English language China Daily giving priority to the port and oil pipeline projects.

"Both sides expressed positive expectations," Liu said, adding the two sides would continue the discussion to reach a proper win-win settlement. "It is predictable that there will be a result acceptable to both sides in the coming future," the report added.

Chinese language Global Times also accused western media of forgetting the significance of the project to Myanmar's well-being and the benefits it would bring. "The so-called controversy encompassing democracy, as matter of fact, is an issue of development rather than politics," their report said on April 5.

As for Suu Kyi's commission, they only met with one representative from 300 families of Aung Myin Thar new resettlement village, according to Ja Hkawng, who was not selected to meet with the commission.

Members of the commission were not reachable for comment.

Ja Hkawng submitted a two-page factsheet on the villagers' concerns, detailing the impact on their livelihood, the environment and Kachin traditions and culture.

"We are cautiously awaiting the commission's report and hope Suu Kyi's final say will not ignore local people's concerns," she said.