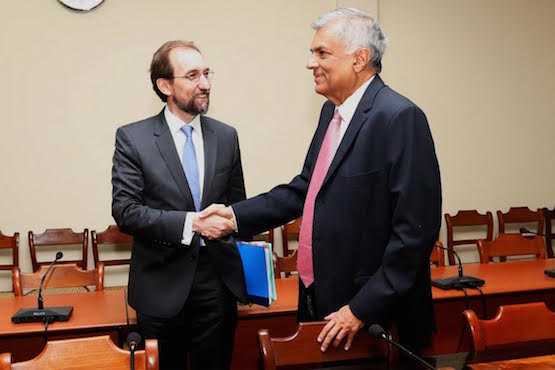 On Feb. 6, the day before a top U.N. official arrived at a camp for internally displaced people in Sri Lanka's north it was visited by intelligence officers.

U.N. High Commissioner for Human Rights Zeid Ra'ad Al Hussein had planned to visit the camp in Jaffna province and the officers wanted to know who was organizing his visit and what they were going to talk with him about.

The camp is a sensitive issue because those living there have had their land occupied by the military for the past 25 years.

It was all a part of Al Hussein's visit to Sri Lanka to monitor the progress of a U.N. Human Rights Council resolution that the Sri Lankan government co-sponsored in October.

Part of the resolution included a commitment by the government to return land to those who lost theirs during the country's decades-long civil war.

Other commitments that Sri Lanka signed up to involve the repeal or reform of terrorism laws and reduction of the military's presence in the north.

The intimidation of activists in the camp before Al Hussein's visit is typical in Sri Lanka's highly militarized north. This sadly remains a reality, despite the fact that the civil war ended nearly seven years ago.

The problems these areas face are many. They are impoverished with little economic prospects. The cemeteries of Tamil militants have been desecrated and traditional Tamil lands are now being cultivated by Sinhalese. Meanwhile Muslims struggle to return and establish themselves in majority Tamil areas a quarter century after they were evicted by the Liberation Tigers of Tamil Eelam.

These are but a few examples that some of my friends from the east discussed with Al Hussein who they met at a civil society meeting in the eastern city of Trincomalee on Feb. 7.

They said that Al Hussein and his team listened sympathetically, but despite the many issues examined, there were a few matters left out of the discussion. Among them were the predicament of survivors of Tamil Tiger massacres in Sinhalese "border villages" and how caste based divisions are resurfacing in the northern Tamil community.

Al Hussein's visit could have been an occasion to ignite fresh momentum to deal with these issues. It could have been better used to re-energize survivors, families of victims and activists who are becoming frustrated and disillusioned with the direction the country is going in. Sri Lankan Tamil women cry at the graves of relatives who died during fighting in Mullivaikkal, scene of the worst atrocities during the last phase of the armed conflict in 2009. (Photo by Quintus Colombage)

Overall, it appeared that Al Hussein took a political approach during his visit and gave priority to engaging with powerful politicians and officials.

He did though have time to visit the Temple of Tooth in Kandy (which was bombed by the Tamil Tigers) and Nallur Kovil in Jaffna, two of most sacred places of worship for Buddhists and Hindus respectively.

But the main part of Al Hussein's visit to Kandy was to meet the influential Buddhist Chief Prelates who were later quoted in local media rejecting his rationale for international involvement in transitional justice.

Al Hussein appears to have failed to convince them about the trust deficit many Tamil survivors and victim's families have of a process that's entirely domestic and includes the serious deficiencies of Sri Lanka's criminal justice system. Nor was he able to sway them about the importance of the government honoring the commitments it has made in Geneva on having international involvement in a judicial process dealing with accountability and justice for wartime abuses.

Several Tamil Catholic priests also met Al Hussein at a civil society meeting in Trincomalee. One of them told me that the U.N. official had been friendly, listened patiently and took notes diligently.

"There was not enough time to raise all issues," the priest told me and advised me on areas I could stress on when I later had the chance to meet the high commissioner.

Overall, Christians are a minority in Sri Lanka's North and East while also being a minority among the Tamil community. Despite this, Tamil clergy and the church have led institutions which have played a prominent and influential role in advocating for strong international involvement in pursuing accountability in Sri Lanka.

Going forward the clergy will have to analyze changes in domestic and international politics while understanding the situation at grass roots level. This will allow them to devise creative ways to engage and advocate in a way that is holistic and helps Sri Lanka reconcile with itself.

Significantly however, Al Hussein's visit doesn't appear to have generated any significant commitments by the Sri Lankan government, just like his agreement to defer war crimes investigation reports from March to September last year.

This is particularly worrying as the country's president and prime minister have made public pronouncements to backtrack on key government commitments while resolutions and progress made on other commitments have been minimal. During this visit, the high commissioner could have set high benchmarks and left it to the politicians to deal with them.