Will the Vatican ever meet prisoner Wang Yi?

China's foreign minister and a Christian prisoner of conscience share a name, but their treatment is vastly different
Published: February 20, 2020 06:04 AM GMT ▾ On Valentine’s Day, the Holy See’s Secretary for Relations with States, Archbishop Paul Gallagher, met China’s Foreign Minister Wang Yi on the fringes of the Munich Security Conference. It was the first time the foreign ministers of China and the Holy See had met in more than half a century.

The meeting came while Hong Kong’s courageous emeritus bishop, Cardinal Joseph Zen, on a visit to Washington, DC, was telling media that the persecution of Christians in China has worsened and that in doing a deal with Beijing “the Vatican lost everything, got nothing.”

While politician Wang Yi is given red carpet treatment around the world, his namesake languishes in a red prison. Sentenced to nine years in jail just after Christmas, Pastor Wang Yi, who led the Early Rain Church in Chengdu, Sichuan province, has been a consistent voice for liberty and human rights since the Tiananmen massacre in 1989.

Get UCA News in your Inbox
Thank you. You are now signed up to Daily newsletter
Convicted on charges of “inciting to subvert state power” and “illegal business operations,” Pastor Wang was also deprived of political rights for three years and authorities confiscated personal property worth 50,000 yuan (US$7,100) in addition to his jail sentence.

Pastor Wang was detained along with over 100 members of his church on Dec. 9, 2018, in an arrest which the UN Working Group on Arbitrary Detention has determined was arbitrary. In 2018 he had spoken out against the regime’s policy toward unregistered and independent churches and new revised regulations on religious affairs, introduced that year, which tighten the state’s control over religious activities and increase pressure on religious believers.

For the Vatican’s foreign minister to meet his Chinese counterpart is not in itself wrong, though it will understandably make Taiwan, with whom the Holy See has formal diplomatic relations, nervous. Any movement toward switching the Holy See’s diplomatic recognition from Taipei to Beijing would be disastrous. But the real question for now is: What did Archbishop Gallagher say to the regime’s Wang Yi?

It is ironic that China’s foreign minister and China’s best-known Christian prisoner of conscience share the same name. And it is bitterly instructive that the Vatican’s top diplomat can meet one Wang Yi but is unable, and would never be allowed, to meet the other. He can meet the Communist Party’s representative but not a jailed Christian pastor.

Did this bitter irony escape Archbishop Gallagher? Did he raise Pastor Wang’s case — or that of any of those imprisoned and suffering in Chinese prisons or re-education camps for their religious faith? Did he demand the release of Catholics and others who are in jail? Did he address the incarceration of at least one million, perhaps as many as three million, predominantly Muslim Uyghurs in prison camps, which expert Adrian Zenz has described as “the largest incarceration of an ethno-religious minority since the Holocaust”?

Did he remind the foreign minister of China’s obligations under the Sino-British Joint Declaration to respect Hong Kong’s autonomy and basic freedoms under “one country, two systems”? Given the erosion of Hong Kong’s freedoms, did he not ask himself whether, since it fails to abide by the joint declaration, an international treaty lodged at the United Nations, China’s Communist Party regime can be trusted to honor the deal it has signed with the Vatican?

Given that the Holy See is happy to talk with China’s Communist Party, it is appropriate to ask when did Pope Francis, or Archbishop Gallagher, last take time to speak with Cardinal Zen or even answer his letters. To talk with Beijing is one thing. To ignore the one cardinal who knows the Chinese Church and the Chinese regime better than any other, and has the freedom and courage to speak, is quite another.

Pope Francis is not shy of speaking out against injustice or calling for prayer for people in places of suffering, conflict or persecution. He does so most Sundays when he addresses crowds in St. Peter’s Square after praying the Angelus, and rightly so. Yet it is noticeable that he has not once spoken about either the plight of the Uyghurs, the crackdown on Christians in China — the worst since the Cultural Revolution — or the crisis in Hong Kong, not even to call for prayer. Instead he has praised China’s handling of the coronavirus even though it was the repressive regime’s attempts to stifle the truth and silence whistle-blowers that allowed the virus to spread unchecked.

And the Holy See not only ignores the conclusion reached by a seven-member independent tribunal led by the man who prosecuted Slobodan Milosevic, British barrister Sir Geoffrey Nice QC, that forced organ harvesting from prisoners of conscience has taken place on a widespread scale in China, that it amounts to a crime against humanity, and that anyone engaging with the regime should remember they are interacting with a “criminal state.”

Worse, those responsible for the barbaric crime of forced organ harvesting have been invited to address a Vatican body. Moreover, there has been little indication that the Vatican wishes to contradict the view of Bishop Marcelo Sanchez Sorondo, chancellor of both the Pontifical Academy of Sciences and of Social Sciences, that China’s regime represents the best example of Catholic social teaching in the world today.

The current Vatican approach to China is reminiscent of the concordat signed with the German Reich in 1933. Intended “as a shield for the church,” that concordat instead lent Adolf Hitler international credibility, criminalized Catholic political activity and demoralized clergy opposed to Nazi rule.

The same mistake is being repeated with China’s regime today. Archbishop Gallagher would have done better to call for global prayers and action to secure the release of Pastor Wang Yi and others like him, rather than seeking a political concordat and a handshake with the pastor’s communist namesake.

Benedict Rogers is a human rights activist and writer. He is East Asia team leader at international human rights organisation CSW and founder and chairman of Hong Kong Watch. The opinions expressed in this article are those of the author and do not necessarily reflect the official editorial position of UCA News. 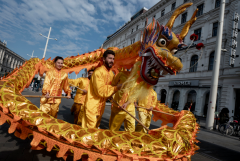