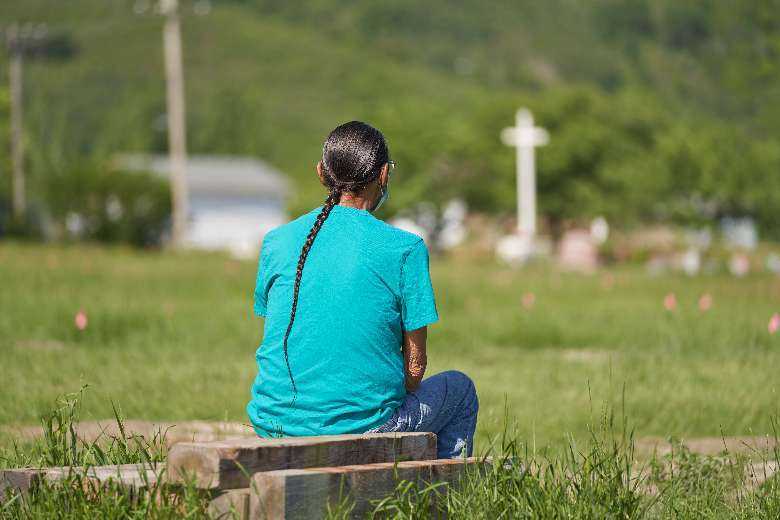 A Canadian man sits and prays at the field where the remains of over 750 children were buried on the site of the former Marieval Indian Residential School in Cowessess First Nation, Saskatchewan, on June 25, 2021. (Photo: AFP)

Pope Francis is under pressure to clear a blot on the escutcheon of the Catholic Church caused by the forceful assimilation of indigenous children in Canada.

Canada’s indigenous schools became a fly in the ointment of the Church's good intentions when it tried to help North America indigenous people after they faced disease, hunger and the loss of their traditional economy during colonial and modern times.

From 1831 to 1996, at least 150,000 indigenous children were forcefully separated from their homes and placed into some 139 residential schools. The Church and its religious orders ran more than two-thirds of the schools.

According to Canada’s Truth and Reconciliation Commission, which probed the Indian residential school system, an estimated 4,100 to 6,000 students died at these schools and their bodies were buried in mass graves within school premises.

The children, buried secretly en masse, are reported to have breathed their last due to Spanish flu, measles or the evil actions of their protectors, according to the commission (2008-19).

Adding a sinister element is the fact that the graves were hidden and there was not one headstone or cross to mark them despite the schools being managed by two resourceful churches — Catholic and Anglican.

The students reportedly did not receive proper medication and decent burials, nor were their families informed of their illness and deaths

Two sets of delegates — one from the Métis National Council and another from the Inuit Tapiriit Kanatami — had separate meetings with Pope Francis on March 28. Another delegation from the Assembly of First Nations was scheduled to meet him on March 31.

The groups asked Pope Francis to visit Canada and publicly apologize there for the Church's treatment of indigenous people and its collaboration with colonizers. The Vatican has said the pope is willing to make the trip but has not said when.

The papal meeting with indigenous people had been set for June 2021 following the discovery of unmarked graves at residential schools in Canada but did not take place due to the pandemic and a surge in Covid-19 infections in Italy.

At least 6,000 students died, though the number could be higher. They were put into crowded, church-run boarding schools, where they were abused and banned from speaking their languages as part of cultural assimilation used as a ploy to undermine the native resistance to the dispossession of local habitats.

The students reportedly did not receive proper medication and decent burials, nor were their families informed of their illness and deaths.

Some survivors said the bodies of infants born to girls impregnated by priests and monks were also dumped in the secret mass graves, The New York Times reported on July 24, 2021.

The mainstreaming of the local populace required a systematic denigration of their cultures and languages, which was conducted under seemingly benevolent civilizing education.

After collecting more than 7,000 statements from indigenous people, the state-funded commission arrived at the conclusion that the assimilation policy was “cultural genocide.”

The Truth and Reconciliation Commission had sought a papal apology for the role of the Church and Trudeau made a personal appeal to the Vatican, but the pope has still not taken that step

The biggest discoveries of the remains of 751 children in Saskatchewan and a mass grave of 215 children in a former church-run school in British Columbia were called “part of a larger tragedy” by Canada's Catholic Prime Minister Justin Trudeau.

In what is officially called the largest settlement against forceful assimilation, Canada announced a US$31.5 billion settlement on Jan. 4 to compensate indigenous families who suffered because of the residential school system.

A part of it will be set aside to improve the child welfare system of a nation where indigenous children make up more than half of those in foster care, according to a 2016 census.

According to the Canadian Conference of Catholic Bishops, Pope Francis will meet representatives of the three major groups of indigenous people.

The Truth and Reconciliation Commission had sought a papal apology for the role of the Church and Trudeau made a personal appeal to the Vatican, but the pope has still not taken that step.

In contrast, the United Church of Canada, the country’s largest Protestant denomination, apologized in 1998 for its role in running the Indian residential school system.

The delegation may ask Pope Francis for an apology for the Church’s role, the release of all records related to residential schools, and the return of any indigenous records that the Vatican may possess in its archives.

Pope Francis has taken the first step by meeting the indigenous delegations to heal the wounds inflicted by the Church. Will the 84-year old pope wrap it with a papal apology?