People react after a Molotov cocktail was thrown during a pro-democracy march along Nathan Road in the Kowloon district of Hong Kong on Oct. 20. Protesters defied a police ban by holding an illegal march, their numbers swollen by anger over the recent stabbing and beating of two pro-democracy protesters. (Photo by Ed Jones/AFP)

Hong Kong’s anti-government protesters have earned respect for their ability to read public sentiment and adjust their tactics when demonstrations risk spiraling out of control, outwitting security forces and the government in the battle for hearts and minds.

That is evident by the scale of the street demonstrations and the violence, which has fluctuated dramatically amid speculation some organizers want to tone the scale of the rallies ahead of district council elections due on Nov. 24.

It’s a shift in strategy that has, at times, caught the authorities unaware.

Heavy detachments of armored police have been deployed across the city, where protest numbers are much fewer than before, with the infamous black attire and matching masks largely absent at most rallies and among the flash mobs.

Insiders say organizers of the “leaderless movement” are wary that Carrie Lam’s administration, which has banned political rallies, could use the demonstrations as an excuse to postpone the poll and thwart attempts to have their candidates elected into office.

It’s a delicate balance and highlights a schism between hardcore protesters, who continue to agitate for independence, and the moderates, who are fearful of Beijing’s iron fist and simply want China to comply with the Basic Law, as agreed with Britain before the 1997 handover.

Such differences were out in force over the weekend when protest numbers were measured in tens of thousands, not hundreds of thousands. After a peaceful start, mobs rampaged, Molotov cocktails were thrown, police blasted tear gas and businesses were trashed. As many bystanders were hurt by police as demonstrators — and a mosque was desecrated with blue dye meant for protesters.

District council election have become an important yardstick in Hong Kong, where promises by Beijing of full democracy and self-rule for 50 years under the Basic Law have been broken.

Instead, the legislature is dominated by Beijing-approved politicians, with the votes skewed to ensure China’s handpicked candidates win most of the 70 seats despite the pro-democracy camp dominating the popular vote. 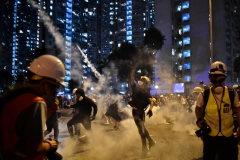 Council elections are different. Next month’s poll will directly elect 452 members to 18 districts out of a total 479 seats. And that appeals to moderates in the pro-democracy camp who are pushing for universal suffrage at the highest levels, delivered peacefully and from within.

Democracy is not the only issue at stake. Hong Kong’s economy is faltering. Beijing’s unwanted intervention and the protest movement have deeply upset business people, who are leaving as the territory teeters on the brink of recession.

The protesters’ cause was not helped by an 18-year-old secondary student who stabbed a police officer in the neck, causing grievous bodily harm, with a box cutter. However, that incident appears to be isolated, more so when compared with the rampant and unnecessary brutality by police and pro-Beijing supporters.

This weekend aside, attacks have included one on the convenor of Hong Kong’s Civil Human Rights Front, Jimmy Sham, who was bashed by four to five unidentified men with hammers. He survived but photos of his bloodied body went viral online.

Police detained and beat a driver working for journalists from a local television station after he was struck by a beanbag bullet. In a separate incident, a cameraman reportedly had his wrist broken by police while filming a protester being beaten.

Most media are clearly identified by fluorescent green vests marked “PRESS” in bold letters, yet attacks by police and the pro-Beijing faction are common and journalists fear their identification marks them as a target. On Oct. 20, a journalist was hit by a tear gas canister.

Then there is Chan Yin-lam, a prominent protester and 15-year-old competitive swimmer who authorities say drowned after her naked body was found floating in the sea. Police say there were no suspicious circumstances. There was no autopsy and her body was cremated immediately. Disbelieving students are demanding a full inquiry.

And two female candidates for the polls, both in their early twenties, were assaulted and struck on the head. “I punch you, so what?” a man asked in a video clip of the incident involving Jocelyn Chau. He threatened to return wearing a mask.

Against that backdrop, Carrie Lam took to the podium last week in a special address to the Beijing-dominated Legislative Council. She ignored a rally outside and offensive behavior inside. Well-known pro-China rabble-rouser Junius Ho was hauled out after suggesting pro-democracy convenor Claudia Mo “eats foreign sausage.” Her husband is British.

Instead the chief executive, with the election clearly on her mind, announced a package of relief measures for Hong Kongers and the long-suffering business sector. That follows US$2.4 billion worth of spending measures announced two months ago.

Efforts to boost the economy have not worked and no one expects a sharp turnaround in the territory’s fortunes before the district council ballot when voters and candidates will be divided along two distinct political lines: pro-Beijing and pro-democracy.

Hardcore protesters also want a full independent probe into police behavior, an amnesty for those arrested, universal suffrage and a halt to the labelling of protests as “riots”. That does not seem too unreasonable.

Exactly what Beijing’s supporters want has never really been articulated. But they don’t want two million people marching through the streets. They don’t like hearing criticism of Beijing and they certainly don’t want democracy that would threaten their power base.

That could make the anti-government movement and their tactics look all the more reasonable, which will matter when Hong Kongers cast the ballots at the district council polls, if the radicals among them can tone down their behavior.

Luke Hunt is a senior opinion writer for ucanews.com. The views and opinions expressed in this article are those of the author and do not necessarily reflect the official editorial position of ucanews.