Will China's crackdown save or sink the Communist Party? 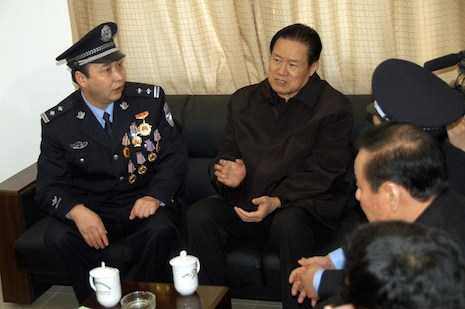 In launching an investigation into former security chief Zhou Yongkang, Chinese President Xi Jinping has entered uncharted and possibly dangerous territory. It not only raises the stakes for Xi’s increasingly iron fisted rule, but also for the Communist Party itself.

The case announced last week targets an official who until recently was ranked the third most senior member of the party hierarchy as a senior member of the elite seven-man Politburo. Zhou controlled the police, paramilitary, courts and state security. Never before has such a senior figure faced a corruption probe in Communist China, a sign that Xi is going after some of the biggest “tigers” in the party as part of a wide-reaching fight against corruption.

Wang Qishan, a current Politburo member and the head of the party’s Central Discipline and Inspection Committee is leading a purge that includes hundreds of people around Zhou. In Wang, Xi has chosen one of his most capable lieutenants to head the campaign. Wang, an erudite former banker, is very well regarded in international business circles, and was seen as a certainty to be Premier Li Keqiang’s chief deputy. In trying to trace the tortuous money trails that lead off key officials and their families, who is better qualified than a banker?

The main target has been the state oil industry clique of which Zhou was the godfather – many previously under him are now under investigation.

Zhou is by any measure a reprehensible human being. He sanctioned a program of extra-legal kidnappings and torture, and rumors remain over the death of his first wife in a car crash in 2000, leaving Zhou free to remarry a famous television anchor 28 years younger than him. The Chinese press have hinted in recent weeks that foul-play may have been at work.

The corruption probe against 71-year-old Zhou represents a clear warning that no one is safe, and China is increasingly rife with rumor about who could be next. Chinese state media – without naming anybody – is making increasingly unsubtle noises that Xi’s administration could next target former president Jiang Zemin, a still powerful figure in the so-called “Shanghai clique” and the man who propelled Xi himself to power.

There have been strategic purges at state-owned companies and government departments in recent weeks, all of which eventually lead back to Jiang.

“Who cultivated the corrupt officials of today? Were they promoted for a reason?” Asked the state-run Xinhua in a blog published in early July.

After previous anti-corruption campaigns withered away, many doubters failed to take Xi’s effort seriously, seeing it as just another purge against internal enemies as the propaganda department cast him as a man of the people.

Both Xi and predecessor Hu Jintao named corruption as the single biggest threat to the Communist Party’s survival. Hu also launched a drive against corruption early on during his presidency, but never on a scale or reaching the party heights seen so far under Xi.

“This is massive,” says Kerry Brown, executive director of the China Studies Centre at Sydney University. "I think they know that the sort of tribal style of looking after your patronage networks that was practiced par excellence by Zhou is old style, the sort of method of someone in charge when China was pumping out double-digit GDP growth. Now those years are over and the terrain is tougher.”

Xi appears ready to destroy the party faithful for the good of the collective, and with an expected seven more years at the helm, many more senior purges are expected. The detention of Zhou is the clearest signal so far that party is deeply concerned that the odds of its own survival are slimming.

The Communist Party has reached an intellectual cul-de-sac, appears ideologically bankrupt and bereft of any purpose save power for its own sake and its associated wealth, apparently the target of Xi’s pogrom.

At the center of his plan is a raft of wide ranging economic reforms. The corruption campaign is central to them in two regards: cowing officials into submission, and making sure under-the-table deals are not derailing those reforms.

But there is a dark side to Xi’s campaign. Like the crackdown on high ranking officials of the regime, the campaign against religion – particularly Islam and Christianity – has gathered pace with stricter measures against Muslims in western Xinjiang and orders to remove hundreds of crosses in eastern Zhejiang province. China’s emperors old and new have always viewed themselves as the moral authority, and Xi appears to be determined to restore the party to this lofty position.

It’s by looking within China and its history that Xi’s actions make the most sense: he, like the rest of the Politburo, studied in China. None come from the growing ranks of those who have been exposed to higher education in the West.

The general disturbing lack of exposure to the outside world is probably why the leadership continues in the belief it can conduct deep and serious economic reform with barely a pretense of political change.

“There is obviously a consensus view amongst the current leaders on this,” Brown says. “They are risk averse, and doing something like this means they feel it will deal with a profound crisis in the party of being able to maintain its legitimacy and authority as the country undertakes some of the hardest possible changes over the next few years.”

Xi appears to be choosing the path of lesser risk, taking a stand now that threatens far-reaching and unpredictable repercussions in the hope of staving off a bigger crisis down the line. He clearly believes there is little time left.

But convincing those around him he can steer everyone to safety only by tossing friends and colleagues overboard is a hard sell, especially when you haven’t told them who – in fact – is going to be sacrificed.