The death penalty could be handed down to graft convicts if that’s what people want, Indonesian President Joko Widodo said in comments this week that drew a swift rebuke from Catholics and rights activists.

Widodo made the comments during a visit to a state-run vocational school in Jakarta to mark International Anti-Corruption Day on Dec. 9.

He was responding to journalists who asked him whether he had considered revising the country’s anti-corruption law after a student asked him if the government had the courage to execute graft convicts.

Rampant corruption in politics and public institutions has long been a thorn in the side of Indonesian society.

“The people’s will comes first. If it is the people's will to include [the death penalty] in the anti-corruption law, it can be put in,” Widodo said.

Although the existing law introduced in 1999 has an article allowing capital punishment for graft convicts, it can only be handed down if the crime is committed during a major natural disaster or during a severe financial crisis.

Widodo's comments were taken to mean it could be implemented in circumstances other than emergency situations.

His comments were backed by Vice President Ma’ruf Amin, who said a broader use of the death penalty in graft cases would serve as a deterrent.

“Many countries still impose the death penalty. Religion also allows [capital punishment] to be imposed for certain crimes that are difficult to handle … Still, it can be done under tight conditions,” he told journalists on Dec. 11.

However, Carmelite Father Aegidius Eko Aldianto, secretary of the Indonesian bishops’ Commission for Justice and Peace, condemned the president's comments. 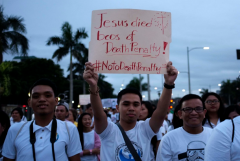 “The death penalty is not a solution when there are other means that can be considered, he said.

He suggested hitting convicts in the pocket with stiff fines or with longer prison sentences.

“Considering that a human being is created in God’s image, a death is God's will no matter what and no one can play God,” he said.

By imposing the death penalty, he said, all the government “wants to do is provide a show of force to the people.”

Eveline Winarko, coordinator of the Sant’Egidio Community in Indonesia, said that although corruption “is like a chronic disease,” it should not warrant a punishment as harsh as death

“Graft convicts should be made impoverished instead of being executed,” she said.

They included the case of Setya Novanto, a former speaker of parliament, who was jailed for 15 years for his role in causing state losses of around US$170 million in a national electronic identity card scheme.