With vote looming, supporters of rival Subianto cry foul as most surveys put incumbent ahead amid talk of police bias Indonesian President Joko Widodo, who is running for re-election, speaks during a campaign rally in the East Java regency of Ngawi on April 2, 2019. Indonesia will hold its general elections on April 17. (Photo by Juni Kriswanto/AFP)

On April 17, Indonesians will vote to decide their leader for the next five years. More than six months of campaigning is finally moving toward a climax, though there is little of the knife-edge excitement that marked the Thai elections.

That's because there appears to be no real contest. Most polls give incumbent President Joko Widodo a solid lead over his challenger, former general and 2014 poll loser Prabowo Subianto.

Subianto's backers seem convinced the best option now is to get ready to scream that a conspiracy is under way to rob their candidate of victory.

His brother, Hashim Djojohadikusumo, who is managing the campaign, said appeals would be made to the United Nations, Interpol and anyone who will listen if his brother loses, and "people power" will be unleashed on the streets.

Hard-line Islamists, too, are warning the election might be rigged. The Islamic People's Forum (FUI), one of the main organizers of mass hard-line protests over the past few years, said it would be deploying monitors at polling stations.

FUI secretary-general Muhammad Al Khathath was quoted as saying that, "our concern is ... if there is foul play, there will be chaos and then we'll lose."

As though to confirm the claims of illicit intervention in the electoral process by Subianto's supporters, the police have now been accused of doing precisely that.

There are allegations of breaches of neutrality by local police chiefs in the provinces of West Nusa Tenggara and West Java, and claims that their subordinates were instructed to rally for President Widodo, known universally as Jokowi.

One of the most convincing pieces of "evidence" is a WhatsApp conversation by a group named "Pilpres 2019" (Presidential Election 2019), in which members were seen moving to rally support for Widodo's re-election. 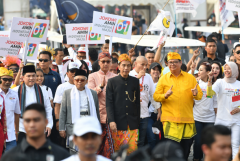 Indonesian mosques declared out of bounds to candidates

Indonesian presidential candidate Prabowo Subianto, a former military general, delivers a campaign speech in Denpasar on Indonesia's resort island of Bali on March 26. Prabowo, who lost to current president Joko Widodo in the 2014 election, was a top military figure in the chaotic months before dictator Suharto was toppled by student protests in 1998. (Photo by Sonny Tumbelaka/AFP)

Adjutant Senior Commissioner Erwin Ardiansyah, the police chief of Bima in West Nusa Tenggara, told other officers they would be "assessed" by the provincial police if their district gained less than 60 percent of votes for Widodo.

Ardiansyah has responded by calling the accusation a hoax.

The Lokataru Foundation, an Indonesian NGO, claims police have been collecting data on public support for each candidate in the presidential election.

The police tried to justify this by saying they have been monitoring the situation to provide better security, but the excuse has fallen flat.

The police are under the direct control of the president, of whom Gen. Tito Karnavian, the national police chief, is a close ally.

Both men have called for police neutrality but critics query the legitimacy of these appeals, especially as Gen. Karnavian has had his salary increased twice since November.

There should be no need for even the gentlest attempt to influence opinion outside the normal parameters of campaigning.

The incumbent has a strong track record, and the polls show widespread satisfaction with the way he's been running the country.

Growth is way off the 7 percent Widodo promised in 2014, but people have money in their pockets, inflation is low, and a range of social security programs has proven effective.

Subianto, on the other hand, offers a tub-thumping nationalist recipe for governance. He said at a national debate on March 30 the military was weak because foreign interests had stolen Indonesia's natural resources. He then got angry when the studio audience laughed at the comment. Many suspect a Subianto presidency would mean a return to the crony-capitalist model favored by his former father-in-law, long-time autocrat Suharto.

Regarding a nationalist platform, Widodo only needs to point to his record of ridding the country of foreign influences on the economy.

He has negotiated a takeover by state-owned interests of a majority share in the rich Grasberg gold and copper mine in Papua, and refused to renew contracts of major oil and gas assets long held by major foreign resource companies including Total and Chevron.

Those behind Widodo's campaign may be concerned about a repeat of what happened in 2014, with a last-minute swing in Subianto's favor.

In the final result, the General Election Commission said Widodo took 53.15 percent of the vote and Subianto 46.85 percent.

At that stage, the former general had already withdrawn from the process, complaining of large-scale cheating. He challenged the result in the Constitutional Court, and argued that as many as 24.1 million votes were problematic. A full bench of nine justices threw out his appeal.

This time around, the opposition insists there are 17.5-million suspect votes, or 9 percent of the total.

Subianto's decision to run again this time appears to represent a final attempt to realize his long-held belief that it is his destiny to lead his country. Swallowing his pride and admitting the people don't want him may be hard to accept.

Given the record of cheating in Indonesian elections, it may be that some form of skulduggery is hard-wired into the Indonesian psyche. For people like the police, keeping the bosses happy means a quick route to promotion.

Maintaining the charade that the election was stolen has advantages for some.

For hard-line Islamists, alleging they are being cheated of victory allows them to play the role of victim, echoing the long-held lament that the country has been stolen from its rightful inheritors.

For Subianto, losing a second time would mean the end of his aspirations to lead the country. He will turn 68 in October, when the next president is sworn in, and he is unlikely to contest the post a third time.

But not all will be lost. Some believe his main focus at the moment is on pushing his political vehicle, the Greater Indonesia Movement (Gerindra). It is expected to come second in the accompanying legislative elections on April 17, maintaining its role as the main opposition.

While he may never realize his dream of leading his nation as president, Subianto can rest assured he will have a continuing role as a political force. Those alleging there is a conspiracy to lock in Widodo's re-election, whatever the final outcome, are cementing a sense of grievance that is likely to dog the country for another five years.