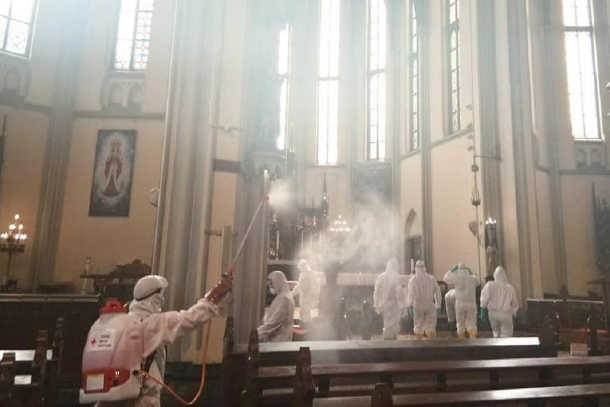 People in protective suits spray disinfectant in Our Lady of the Assumption Cathedral Church in Jakarta on March 15. (Photo courtesy of Susyana Suwadie/Jakarta Cathedral Church)

Indonesian President Joko Widodo has called on religious followers to worship at home as the number of people infected with Covid-19 continues to rise in the world’s fourth most populous country.

As of March 16, Indonesia had recorded 134 confirmed Covid-19 cases and five deaths. The number has increased significantly since Widodo announced the first two confirmed cases on March 2.

“The most important things to do right now are to reduce people’s movements from one place to another, to encourage social distancing and to minimize crowds which pose a bigger risk of spreading the Covid-19 virus,” Widodo told journalists on March 16.

“Studying from home, working from home and worshiping at home need to be promoted to reduce the spread of the Covid-19 virus.”

However, Widodo said he has not yet considered imposing a general lockdown.

“I have to emphasize that ordering a lockdown, either at national or regional level, is under the authority of central government. Such a policy cannot be issued by regional administrations,” he said, adding that any effort taken to curb the spread of the virus should not worsen the country’s economic situation.

Widodo also called on society to show solidarity “to move us together to fight against the Covid-19 virus.”

In response to the call, some parishes in Jakarta Archdiocese issued letters offering advice to churchgoers.

Holy Family Father Yulius Edyanto from Holy Family Parish in East Jakarta said his parish has canceled non-urgent gatherings such as catechetical and parochial activities. A planned visualization of the Passion of Christ was canceled.

“However, liturgical activities, such as daily Mass, the Way of the Cross, Sunday Mass and confession, will continue,” he said in one letter.

“This will be reviewed on March 31,” he said, acknowledging that there has been a significant drop in Massgoers.

Parishes are also spraying disinfectant in churches to ward of infections.

Cardinal Ignatius Suharyo Hardjoatmodjo of Jakarta said his archdiocese has not yet come to a decision regarding Holy Week celebrations. “We are consulting doctors for their opinion,” he told UCA News.

Meanwhile, Archbishop Robertus Rubiyatmoko of Semarang in Central Java province said parishes in his archdiocese have scaled back non-urgent meetings and gatherings.

“Catholics are accepting it as they really understand the current situation,” he told UCA News.

Widodo’s call was welcomed by Rev. Gomar Gultom, chairman of the Communion of Churches in Indonesia.

“Together we will respond to President Widodo’s call. It is time for us to self-isolate and cancel non-urgent meetings and activities for at least two weeks,” he said in a statement.

He has called on Protestant churches to develop a so-called “e-church” using social media and digital technology.

“Many Protestant churches are not yet ready due to an infrastructure problem. But I believe they will be ready in the very near future so that congregations can worship at home,” he said.

The Indonesian Ulema Council issued a fatwa on March 16 calling on Muslims to obey government directives.