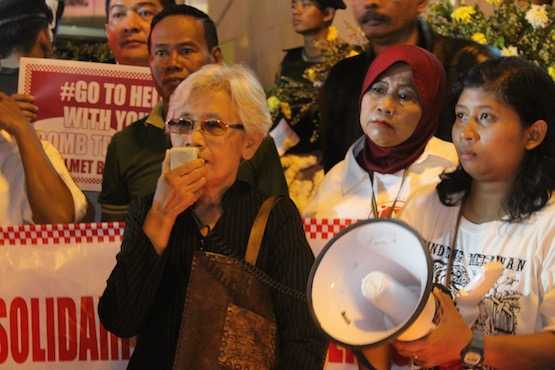 Maria Catharina Sumarsih speaks at a rally to demand justice for her son killed during a 1998 Indonesian student protest against former Indonesian dictator Suharto. (ucanews.com photo)

Indonesian President Joko Widodo has acknowledged criticism that past gross human rights violations have not been resolved and has pledged to make them a priority.

He made the remarks during a speech in Solo, West Java, to mark Human Rights Day on Dec. 10.

"I realize that we still have work to do in relation to human rights enforcement as some cases are not yet resolved, including past gross human rights violations," Widodo said.

The president had vowed soon after assuming office to address gross violations, including the 1965 communist purge in which hundreds of thousands died, various other shootings and massacres, and enforced disappearances.

Critics say he has yet to address any of them.

Yati Andriyani, coordinator of the Jakarta-based Commission for Missing Persons and Victims of Violence or an NGO dealing with human rights issues, doubted Widodo’s sincerity following the speech.

"We want him to take concrete steps," she told ucanews.com, adding that the president should issue a presidential decree on the establishment of an ad hoc human rights court to deal with these cases.

Maria Catharina Sumarsih, a Catholic whose son, Bernardus Realino Norma Irawan, was killed in a crackdown on anti-Suharto protesters in 1998, said she had been told a year ago that an investigation would be launched into her son’s death.

"I have not seen any progress yet," she said.