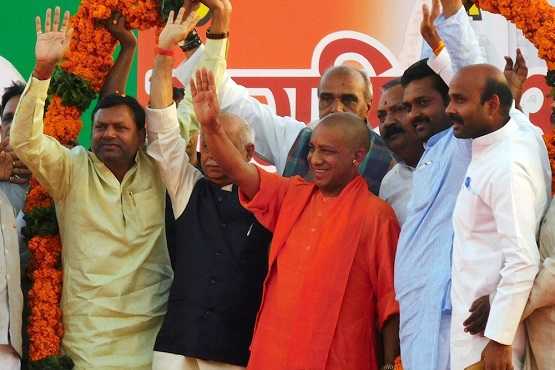 Uttar Pradesh Chief Minister Yogi Adityanath (center) waves to supporters as he arrives to address a gathering in his home constituency of Gorakhpur on March 25. (Photo by IANS)

In choosing Adityanath — one who presumably follows an ascetic life style based on yoga — party leader and Prime Minister Narendra Modi has not only authorized him to anchor BJP's massive victory in Uttar Pradesh but also given Hindu groups a new generation of leadership.

The saffron-clad Adityanath, born Ajay Singh Bisht in 1972, is 45-years-old, 22-years younger than Modi himself. Political commentators such as S.K. Dutta believe Adityanath is the new face of the BJP.

"Today's elections require a face. Ideologies do not matter much. The BJP has it in Narendra Modi. But the BJP is being visionary in creating another while the Indian opposition and chiefly the Congress party is stuck in the 1970s," said Dutta.

Adityanath is chief priest of the state's famed Gorakhnath (Shiva) temple in Gorakhpur, the region where he wields unquestionable political influence because of his hard-line views on Hindu religion and practice.

His political career has been closely linked to the temple that he joined aged 21, renouncing the world to become an ascetic. The head priests of this temple have a history of political involvement since 1921 when its then chief opposed the non-violent method of Mahatma Gandhi and was arrested for instigating people against him.

Adityanath's predecessor was elected to the state legislative five times in a row and to the Indian parliament in 1970 and 1989. Adityanath followed this tradition and won the 1998 election aged 26, becoming the country's youngest parliamentarian. He made Gorakhpur a winning constituency for next four elections 1999, 2004, 2009 and 2014, underlining the unquestionable political sway of the Gorakhnath temple.

Over the last two decades, local media have carried several stories about Adityanath's radical views and his brush with controversy. At least 18 criminal cases were registered against him, including criminal intimidation and rioting.

In 2005, he was actively part of a re-conversion drive where 1,800 Christians were reportedly converted to Hinduism in the town of Etah in Uttar Pradesh.

More than once, he has gone on record urging Hindu youth to avenge the so called insult of Muslims marrying Hindu women. He is accused of inflammatory speeches which linked him to the 2007 Hindu-Muslim riots in Uttar Pradesh.

Police arrested him once in 2007 on charges of disturbing the peace which led to further unrest in the area. His supporters set fire to several coaches of the Mumbai-bound Mumbai-Gorakhpur Godan express train.

He has also lauded U.S. President Donald Trump's radical views on Muslims and said India can emulate such a stance against Muslims to fight terrorism. He has in the past even criticized Mother Teresa and accused her of converting needy Hindus to Christianity.

"Look at the master card they have played: compared to Adityanath's chauvinistic hard-liner image, Modi will now appear the sober catalyst of development. This suits the BJP's image for Modi," Ali said.

Another Muslim leader Shahnawaz Khan from the Muslim forum Jamaat-I-Islami Hind said Adityanath's ascension ends the ambiguity among some Hindu voters about the pro-Hindu agenda of the BJP. "For others, the "Adityanath-Modi combination is the ideal synthesis of majority politics and development."

Although a hard-liner, Adityanath was never a member of the socio-political group Rashtriya Swayamsevak Sangh (RSS), the radical engine room that runs the BJP government and the agenda for Hindu nationhood. In contrast, Modi was a former RSS volunteer and they backed his political moves.

But without a doubt, Hindu hard-liners backed Adityanath to the hilt. RSS ideologue Rakesh Sinha told media that Adityanath's selection "was the most appropriate decision."

Many see the decision as an RSS strategy to build up another power center away from Modi who seems to be in complete control of party apparatus. "It is true, there is a balancing act. Now, we will have another power center in the BJP as Adityanath will control over 300 state legislators" and a large number of parliamentarians, a party insider said.

Uttar Pradesh's political prominence in the country is due to its 220 million people, who elect 80 of the Indian parliament's 543 members. In the last national elections in 2014, the BJP won 70 of the 80 parliamentary seats.

But for some leaders like Bhartruhari Mahtab, a parliamentarian from the eastern Indian Odisha state, Adityanath has Modi's backing too. "Modi is trying to ensure his parliamentary election victory in 2019 by creating a strong Hindu leader in Uttar Pradesh," he told ucanews.com.

A weakened opposition has only helped consolidate Hindu voters in favor of the BJP and its agenda, said Dutta. "The problem with Indian opposition parties is that they are stuck in the political ideology of 1970s.

"The opposition parties especially the Congress and left parties in India need to update the political software; they need to refashion their model. When will this happen?" he said.

With Adityanath as the chief minister of Uttar Pradesh, "the portents are dangerous for the nation because what is at stake is India's secular system," said Chhotebhai, a Catholic leader in Uttar Pradesh.

Adityanath has a history of anti-minority slogans and "can we expect him to change? Now that he is in power, just like Modi, he may not say anything [against minorities] but that may not stop others from pursing discrimination," said Chhotebhai, who uses only one name.

Referring to the RSS recommendation to make its current chief the president of India, Chottebhai explained how Hindu extremism is different from the Islamic version. Hindu hardliners will not go for direct confrontation but will infiltrate every system of the nation such as education, admiration and judiciary and change it from within, he said.

Once a BJP sympathizer becomes president and the party gains a majority in the upper house of  parliament, they will start changing India's secular constitution to suit their ideologies, he said.

Christians in Uttar Pradesh, who form only 0.18 percent of the population are politically and socially negligible. "They will not directly attack Christians. They are shrewd strategists. They will move slowly, playing one card at a time," Chhotebhai said.

A. C. Michael, another Christian leader based in New Delhi, said with the choice of Adityanath as chief minster the BJP's agenda of Hindu nation is "no more a hidden agenda. They are bold and firm about speaking about it and acting on it."

Nirendra Dev is writer and journalist based a New Delhi.