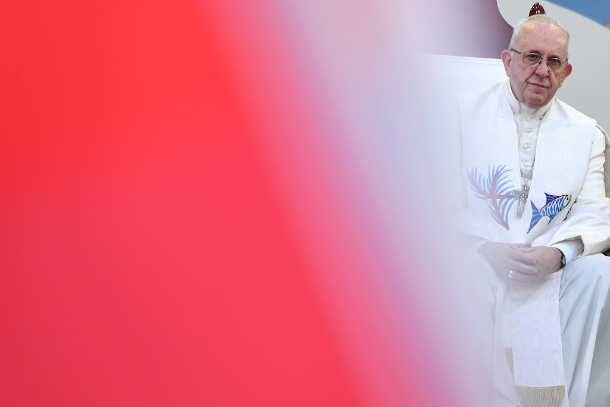 Pope Francis takes part in the welcome ceremony at the Campo Santa Maria La Antigua in Panama during World Youth Day on Jan. 24. He told a Hong Kong pilgrim that he intends to visit China. (Photo by Alberto Pizzoli/AFP)

In the welcome ceremony for World Youth Day 2019 in Panama last month, Pope Francis was asked by a young Hong Kong pilgrim to pray for Hong Kong and China and he replied: “I must go to China.”

But for what purpose must the pope come to China? To carry out pastoral work when the Chinese Communist Party (CCP) runs an atheistic government? To feel the religious atmosphere when there is no freedom of belief? To look at the implementation of the Sino-Vatican provisional agreement on bishop appointments when the underground Church is still being suppressed? To promote Sino-Vatican diplomatic relations when Chinese authorities reject any foreign intervention on the mainland?

Therefore, what does the pope really want to see when he “must” come to China?

If the pope must come to China, I will suggest he sees our underground Church. To see how the CCP keeps suppressing us, detaining our bishops and priests, and especially how the underground Church is humiliated and being forced to join the Chinese Catholic Patriotic Association.

If the pope must come to China, I will suggest he asks to visit our detained and missing bishops, including Bishop Su Zhimin of Baoding and recently released Coadjutor Bishop Augustine Cui Tai of Xuanhua, to see how they are walking their own roads of faith.

If the pope must come to China, I will suggest he visits government-recognized clerics to see how they embezzle church money; how victims of a church-run investment scheme hang banners seeking compensation for their losses from bishops; and how secularization of the Chinese Church is now an incontestable fact of life in mainland China.

However, it would be not easy for the pope as the CCP’s general practice on receiving foreign leaders is only to let them see what the government wants them to see but not what they really want to see.

He would only be able to see the good and bright side of this great country and all the people he meets must be arranged by the government. I can imagine that those people will certainly say how believers in China enjoy their religious freedom, how human rights and religion freedom are guaranteed, how churches in China are protected by the government and how the great leader Xi Jinping saved them.

When receiving foreign leaders, the CCP ensures that people including clerics who are labeled as anti-government and disruptive to society may be sent away, detained or disappeared.

Frankly speaking, instead of coming to China, Pope Francis should condemn the evil deeds of the CCP.

As the CCP’s disregard for human rights and persecution of religion becomes more serious, many countries are daring to stand up and condemn its atrocities. Just recently, after it was reported that a Uyghur musician in Xinjiang had died, Turkey demanded the CCP close all the region’s re-education camps.

However, the pope not only does not condemn the CCP’s suppression of the Church in China but instead chooses to cooperate with the CCP by using the Sino-Vatican provisional agreement to push believers to accept the leadership of the Patriotic Association. This is nothing other than throwing the flock to the ferocious wolves.

The Vatican has always explained that the provisional agreement aims to help the Church to accomplish its evangelization on the mainland and to impel the Chinese government to recognize the status of the pope.

Cardinal Fernando Filoni, prefect of the Congregation for the Evangelization of Peoples, said in an interview with Taiwan media that “I feel that within the Catholic Church in China there is a great expectation of reconciliation, unity and renewal for a more decisive revival of the work of evangelization.”

Such a statement seems to deny the achievements of evangelization by the Church on the mainland. It seems to say that since the Patriotic Association caused the phenomenon of an underground Church and an open Church in China, there has been no evangelization.

From another perspective, Cardinal Filoni seems to be saying that evangelization is not thriving and robust because of the disunity of the Chinese Church.

The underground Church has been encouraged and praised by the Holy See but now it is accused of being unfaithful. This kind of big flip-flop is really confusing.

Talking of the Sino-Vatican agreement, Cardinal Filoni said: “In light of the agreement, the specific role of the pope is recognized. The so-called principle of independence now needs to be reinterpreted in view of the relationship between the legitimate pastoral autonomy of the Church in China and the indispensable communion with the Successor of Peter.

“I hope, therefore, not to hear or read about local government officials using the provisional agreement on bishop appointments to compel people to do what is not even required by the law in China, such as joining the Patriotic Association.”

In the cardinal’s comments, does the reinterpretation of the principle of independence mean the recognition of the independence of the mainland Church, or are there other explanations?

Also, if he hopes not to hear about local government officials forcing underground Church members to join the Patriotic Association using the excuse of the provisional agreement, please say it louder to the CCP, rather than being ambiguous, as it may easily cause misunderstandings among people.

If Cardinal Filoni knows that the CCP has used the agreement as a tool to force believers to do something unjust, does he tell the pope about such a situation? Or does he conceal the truth from the pope? Or has the pope ignored his words?

In fact, whatever the Vatican and the pope say and do, it seems to reveal a message that they are striving to cooperate with the CCP at all costs. Is it more important to establish diplomatic relations with the CCP than to uphold justice? Could God’s righteousness be ignored?

As a Catholic in China, I am of course very eager for Pope Francis to come to China if he will speak out for the underground Church, human rights and religious freedom instead of endorsing the totalitarian government. If he wants to do that, he really must come.

John Lo is a Catholic priest in China.