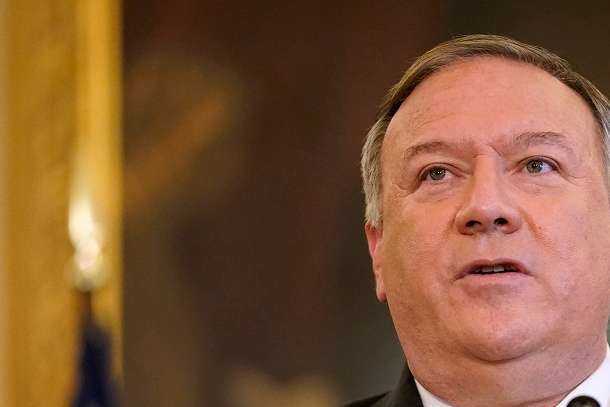 US Secretary of State Mike Pompeo lambasted the 'horrific' persecution of believers of all faiths in China. (Photo: AFP)

What the Vatican and Beijing started as an experiment has turned out to be successful by their own standards.

Officials in Rome and Beijing are now confidently doing their homework for an extension of the 2018 Vatican-China deal on the appointment of bishops. The extension is expected to be signed next month.

Caught in the new bonhomie between the Catholic Church and communist China are the US presidential election and Taiwan, which China claims as its own and vows to use force, if necessary, to annex it.

Since the deal, the Vatican has been noticeably silent on Taiwan, an island lying across the Taiwan Strait. Experts say the Church is working towards one unified Catholic Church in China in line with Beijing’s “one China” policy.

The Donald Trump administration has strengthened engagement with Taiwan before the US presidential election in November.

High-profile US officials are visiting Taiwan and the latest entrant to the Republic of China, as Taiwan is formally known, is undersecretary for economic affairs Keith Krach, who is expected to clinch a US$7 billion arms deal during his visit this week.

Under the Taiwan Relations Act, the US supplies arms to Taiwan. In the past 10 years, the US has announced more than $23 billion in arms sales to Taiwan, according to a 2019 Department of Defense report.

The Vatican’s new-found love for China has angered Washington, with Secretary of State Mike Pompeo going on the offensive last week in an article in First Things, a US-based religious publication. He decried "horrific" persecution of believers of all faiths in China. He wrote that many nations have expressed "revulsion" at "accelerating violations of human rights."

"The Vatican endangers its moral authority, should it renew the deal", he added on his Twitter account.

Thousands of conservative Catholics in the US, who are unhappy with Pope Francis’ policies, are also upset about the China deal. Could Trump be aiming to get their votes in the presidential election?

The Vatican was taken aback by the comments of Pompeo, who is due to visit the Holy See next week.

Archbishop Mark Coleridge of Brisbane, Australia, said Pompeo’s comments were an “attempt to press-gang the Holy See into a questionable domestic/electoral agenda playing itself out on the international stage.”

The Vatican is no mood to relinquish its hard-earned breakthrough with Beijing, though church officials acknowledge that the pact on bishops has not put an end to religious persecution in China.

The Vatican just cannot abandon a deal that came after three decades of lackluster talks. The Holy See inked the historical "provisional" pact with Beijing on Sept. 22, 2018, but its details have not been made public.

The key attraction of the agreement was the role set aside for the Vatican to have a say in appointing Catholic bishops in China with a papal mandate.

China's roughly 12 million Catholics are split between a government-run association, whose clergy are selected by the atheist Communist Party, and an unofficial underground church loyal to the Holy See.

One year after the deal was struck, Chinese and Vatican foreign ministers met publicly for the first time in seven decades at an international event, indicating the “experimental deal” was on the right track.

Beijing welcomed the extension of the deal as it was facing criticism from all corners for its human rights violations against the Tibetans and Uyghur Muslims in Xinjiang province and a sweeping security law in Hong Kong.

A spokesman for China's foreign ministry claimed last week that the interim deal with the Vatican was "implemented successfully" and "mutual trust and consensus" between the two parties have increased.

Cardinal Pietro Parolin, the Vatican's secretary of state, admitted that Pope Francis’ aim is to “normalize the life of the Church as much as possible" in China. The cardinal, however, said the results "have not been particularly striking" so far.

Diplomatic ties between Beijing and the Holy See ceased in 1951, two years after the communists seized power in China. Their efforts to patch things up were hampered by the Vatican's diplomatic ties with Taiwan, considered by Beijing a breakaway province awaiting reunification.

No wonder the Vatican was tightlipped when there was a call by international leaders to include Taiwan at World Health Organization assembly meetings after it successfully kept the coronavirus at bay at the beginning of this year.

It is obvious that the Trump administration has domestic political interests in criticizing the Vatican-China deal.