Why I find pope’s ideas on women priests disturbing

Pope Francis must call together and listen to women, not only religious but lay women as well 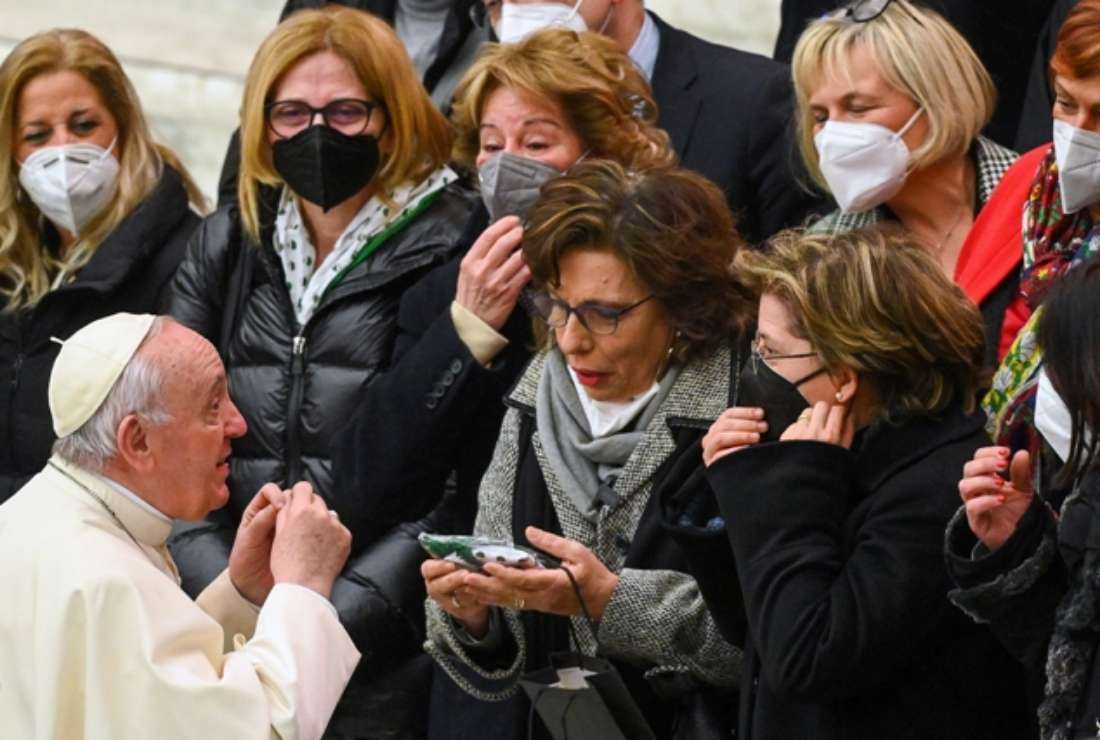 Pope Francis meets a group of women at the end of his weekly general audience at the Paul VI hall in the Vatican on March 2. (Photo: AFP)

Recently the Jesuit-run America Magazine interviewed Pope Francis on various topical issues, among them the question regarding what he would say to women who are already serving in the church, but who also feel strongly about the call to be a priest in the Catholic Church.

Pope Francis reinforces the gender binary by pointing to the Petrine principle which means Jesus chose Peter as head of the Church and 12 male apostles because Jesus our high priest was male!

Pope Francis suggests that women have no place in the Petrine principle.

On the other hand, the Marian principle is a mirror of the Church as a woman and as the spouse of Christ. So, he suggests that women have to be content with being the mirror image of the Church which represents the feminine spouse of Christ — what a convoluted explanation to convey to women that we are an important part of the Catholic Church dominated by men.

As a woman, I do not know whether to laugh or cry at Pope Francis’ suggestion about women’s position in the Church. How can an institution that is ruled solely by men be ‘woman?’  How can such an institution be the ‘spouse’ of Christ?

I wonder if perhaps this theological idea of the Church as a woman and as the spouse of Christ and the male priests as representing Christ could be the root of the sexual abuse of women by clergy.

Pope Francis suggests that women’s place in the Church is a theological problem that needs to be sorted out by coming up with a theology on women.

I would like to remind Pope Francis that there are numerous articulate and excellent women theologians who have already been speaking of women’s positions in the Church.

Pope Francis’ reiteration of the Petrine and Marian principles is an indication that he as the leader of the Church has not bothered to read the writings of feminist theologians of the past 50 years.

Feminist scripture scholars have pointed out that Jesus never ever ordained any priests.  The last supper had both men and women present when he said “Do this in memory of me.” Women disciples in the scriptures were Jesus' most faithful followers.  He even chose a woman to carry the good news of his resurrection to the world.  Would Jesus not want women leaders in the Church?

The third explanation that the pope gives is what he describes as the ‘administrative’ one.

He points out that In the Church there is the ministerial and ecclesial role which is reserved for men. Then there is the administrative role which has so far been dominated by men, but Pope Francis has recently begun opening it up for women’s participation.

He concedes “we have to give more space to women.”

While women appreciate the steps Pope Francis has taken to bring reform in the Church and the Roman Curia, his response to women’s ordination has disturbed a lot of progressive-thinking women and men, especially when he calls it a theological problem.

It is pertinent to note that the theology that Pope Francis has quoted has been articulated by men from a male perspective.

Women entered the field of theology only after the Second Vatican Council.  Since then women have been studying scriptures and interpreting them through a woman’s lens which has brought in new and fresh perspectives that men could never see.

But somehow the Church has not recognized these perspectives nor listened to what women have to say.  Women’s voices keep getting dismissed based on a theology that has not been updated to include women’s thinking about God and how God speaks to women in the context of their lives.

The reason why women need a place at the ‘table’ is that it is only through ordained ministry that one gets to make decisions that affect all in the Church.  Women’s voices have been missing at the decision-making table in the Church.

The forthcoming Synod on Synodality is about listening to the voices of all.  Women in the Church have been the most enthusiastic participants in synodal discussions at the grassroots, but their voice has not been heard, because the male leaders in the Church get to choose whose voice gets heard.

No one can deny that women are the most active participants at the parish and pastoral level of the Church.  Yet women continue to be kept down like the proverbial ‘slaves’ in the Church.  Yet what women all over the world are asking for is active ministerial roles, but they are being dumbed down by theological mansplaining.

Pope Francis has asked that all join the listening sessions. Somehow the bishops chose only those who they feel comfortable with while others are just never listened to. Can Pope Francis find a way to listen to voices from groups that have remained on the peripheries?

If the pope is really serious about fostering a culture of ‘encounter’ and ‘listening’ in the Church, he will call together women, not only religious but lay women as well, and listen to them. Today modern means of communication can easily facilitate this.  May Spirit Sophia continue to work and inspire the Church towards wholeness.

8 Comments on this Story

THERON CLAUDE
This article is a perfect example of why Paul taught that women should remain quiet in the church.
Reply

VIRGINIA SALDANHA
Theron Claude, Women are the reason you even exist on this planet, so maybe you should be silent while women co-create and lead with wisdom that men have yet to gain. This is the age when women have come into their own and will not be silent any more!

RANJIT YAWU
Thank You Virginia for your comments: 1.Seeking a PLACE AT THE TABLE for a MINISTERIAL & ECCLESIAL role in the Church, 2. Women continue to be kept down like the proverbial ‘SLAVES’ in the Church& 3. Would Jesus not want women followers in the Church? If Jesus really wanted to PLACE AT THE TABLE, a WOMAN for a MINISTERIAL & ECCLESIAL role in the Church, the best qualified would have been his mother. So Jesus had a reason to prefer Peter to his own mother. How? For flesh and blood has not revealed this to you, but my Father who is in heaven.Matthew 16:16-18 It is a revelation by the Father and NOT an acquisition by learning that gets one to the “PLACE” at the table. None would be entitled to a PLACE AT THE TABLE unless chosen. John 15:16. So let all men and women not lay claim to a PLACE till CHOSEN! Why do women who are treated as SLAVES tolerate it and remain docile in the face of Clericalism? It’s worthwhile to ascertain if Mary and the other women in the Church were maltreated by Peter? In fine, the will of God will emerge when the Spirit guides the Church & the Pope in the discernment of these issues!

ALAN
Why do this site always have the most unorthodox and heretic writers?
Reply

DOROTHY
Thanks dear Virginia for sharing this article. There are certain aspects on which we could debate. Certain points you raised are very relevant, we need to walk that talk...... decision making is important, do we need to think how can we make or carve out our space
Reply

ISAAC GOMES
The Pope’s observation “we have to give more space to women” is both condescending and warped. Why should women beg the pope for their rightful and equal “space?” Petrine principle cited by the Pope is a lame justification to perpetuate male domination in the church hierarchy. Firstly Christ did not preach Christianity. It was propagated centuries later after His death. He did not make Peter the Pope nor did he institute priesthood. All said and done, why are women unquestioningly accepting all the church diktats? To begin with they should stop bowing and kissing the rings of bishops and cardinals. Women’s Commissions including various women’s cells are also to blame for perpetuating the Petrine principle. They should reject all warped philosophies/justifications of women being “brides” of Christ (which in simple terms means second class citizens). In this case I recall a senior nun in Kolkata who said one cannot question a parish priest’s decisions for he is a king! Iran’s anti-hijab demonstration is a living example of women’s successful movement for their rights. Going back to the Bible “But you are a chosen generation, a royal priesthood, a holy nation, His own special people, that you may proclaim the praises of Him who called you out of darkness into His marvellous light.” (1 Peter 2:9). Nowhere did Christ say “You MEN are a chosen generation, a royal priesthood, his own special people!”
Reply

ISAAC GOMES
The sum total of Jesus' teaching was: 1) “Love God, Love Others, starting with one's neighbours. 2) Do to others as you want them to do to you. 3) “Forgive As God Forgave You” Jesus spoke on forgiveness in Matthew 18:21-35 Neither did Jesus preach Christianity nor did he install the Church Hierarchy (putting women as "brides" in the subservient category).

MEERA
Congratulations Virginia, fir the articulation from yourcoerspective. It is high time to reflect on evolution of Theology as it is found now, as the evolutionary process is still underway context will change and so Theology.....
Reply