As the deal on bishops' appointments expires, Catholics in China are not convinced that the Vatican knows what they want 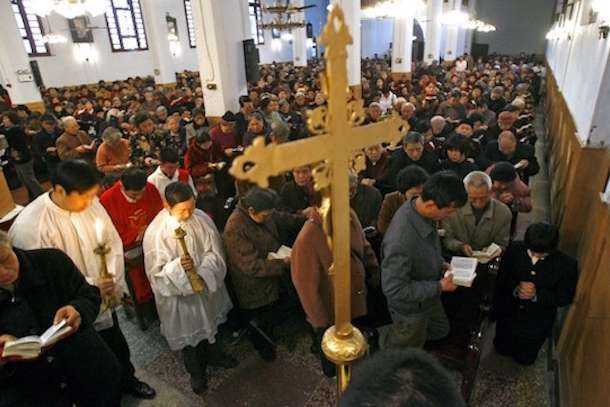 A file image of Good Friday Mass at St. Joseph's Church in China's southwestern municipality of Chongqing. Many Chinese Catholics in the underground church are disillusioned by news that Beijing and the Vatican are close to renewing their deal on the appointment of bishops. (Photo: Liu Jin/AFP)

Humans experimented for centuries in trying to fly until the Wright brothers were successful just over a century ago. Several people died, some jumping off cliffs, in attempts to fly. The eventual success was the totality of incremental progress made over centuries, learning from each victim.

The Vatican experiment in China may not look as crazy as the idea of flying. The seemingly innocuous aim is to normalize the Catholic Church's life in China. It wants to provide a single hierarchy of bishops and priests approved by the Vatican and accepted by the state. This noble aim should unite Chinese Catholics, who stand divided as the underground church and the state-approved open church.

The principle of this experiment — that is, the content of the pact — remains a secret. Ordinary Catholics in China, who should become beneficiaries or victims of the attempt, have no idea what exactly are the terms of this experiment. But they saw some sudden movements. Soon after it was signed, the Vatican removed excommunication from eight bishops who had been appointed by the state without papal approval.

Several underground church members question the decision to continue the experiment, asserting that the agreement has not brought any progress for them. Rather, it has only helped the communist regime accelerate moves to end the underground church.

In the past two years, harassment of Catholics has only increased. Several churches, closed under the pretext of the Covid-19 pandemic, are yet to open. Children have been banned from entering churches. Communist officials restrict feasts and prayers like Vespers.

Local Catholics insist that the Vatican does not understand the real situation of the Church in China. For the Chinese regime, the pact is only a tool to bring the entire Church, including its leadership, under its control. A regime based on atheist principles cannot care about the principle of religious freedom. The pact will ultimately devastate the Catholic Church in China, they fear. The communist move to suppress the Church will not bring peace but give rise to resistance and violent suppression, creating innocent victims.

People who continue an experiment, hoping it is on the right track, also need to learn from the victims' experiences. Failures are lessons. But that learning would be imperfect or even misleading if victims' experiences were not learned. People stopped jumping off cliffs long before the Wright brothers made the first successful flight in 1903.

Sometimes experiments need a course correction, an all-new way of looking at abilities and resources. Catholics in China are not convinced that those in the Vatican know what they want or can understand the communist maneuvering.

There is also a feeling that the Vatican trusts the communists more and takes them more seriously than the Catholics who withstood communist violence for all those years. If the victims of the experiment are ignored, could they make any progress?

The Vatican should be defending the interests of Catholics in China. But is it in the Church's interests to demolish churches and crosses and take over church land? When the government was persecuting the Church in the late Qing dynasty, Western countries knew how to seek justice for the Church. Is it not surprising that the Church's supreme body dares not make the slightest criticism of the Chinese government that continues to suppress Catholics? What does the Church plan to achieve through such diplomatic silence? Will that diplomacy make any sense to a Christian?

However, not all Catholics in China are against the agreement. A section welcome the decision to renew the agreement. One of them said that since Pope Francis signed the pact, it represented God's will!

Some believe that because the agreement is experimental, Catholics should give it more time and should not be blinded by temporary difficulties. They argue that as long as Catholics are united and obey the state and the pope, there will be no chaos.

The Vatican is sure to continue the experiment. But they will do well if some attempts are made to learn from the victims. Is it not unchristian to push people off a cliff for the sake of an experiment while ignoring their lives?