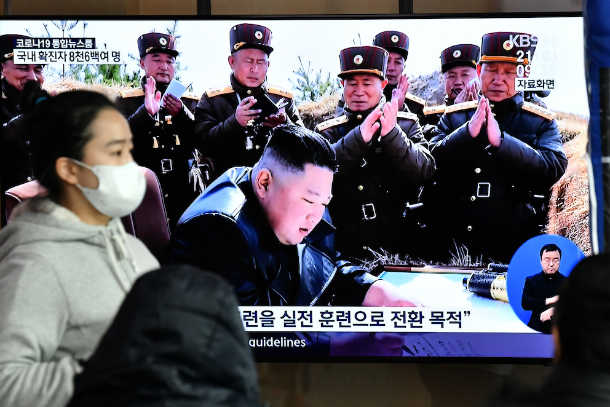 In authoritarian North Korea, nothing but the official version of events is permitted as its recalcitrant leader Kim Jong-un always plays his cards close to his chest.

So when the communist country boastfully claimed that it is free of Covid-19 infections, the world reaction was sheer incredulity — something more than mere skepticism. A lack of free media and an independent monitoring mechanism makes it nearly impossible to vet official accounts aired by mouthpieces for the one-party state.

Whenever it has faced a crisis, Kim's regime has responded with deceit, aggression, arms testing and militarism. The current situation is no different. As the Covid–19 pandemic spills across nations' borders, killing thousands each day, North Korea has projected an image that it's all business as usual in the reclusive country of 25.79 million people. To underscore this point, Kim made March "the single busiest missile-testing month" by launching seven separate missiles while the world was struggling to cope with the deadly disease. When military activities were started in March, Kim was surrounded by Korean People's Army officers wearing face masks, suggesting the presence of the pandemic in the country. By the time of final missile tests in the same month, the masks were conspicuously absent, suggesting that North Korea had successfully staved off the disease and everything remained on track. "Not a single person" in the country has been infected with Covid-19, Pak Myong-su, director of the anti-epidemic department in North Korea, told wire agency AFP in early April. The world was at its wits' end when Pyongyang made this tall claim. Many wonder how a dictatorship with a poorly equipped medical system, ravaged by multiple international sanctions in recent years and with a population facing widespread malnutrition and inadequate sanitation, could achieve this when all its neighbors were reeling from the pandemic. "You can't trust North Korean statistics," said Choi Jung-hun, who worked for a decade as a physician in North Korea before fleeing the country in 2011. Saving face is more important to the regime than citizens' health or lives, he told AFP. Global media quoted experts to suggest that North Korea was making an impossible claim. But as always, no one had any confirmation. All they had was scanty evidence without any proof to back their suspicions. Ahead of others However, evidence suggests that North Korea acted much more quickly against the pandemic than other countries in the region. Pyongyang shut down its border after the novel coronavirus was first reported in neighboring China in late December. It has no cross-border relations with its other major neighbor South Korea, which reported its first case on Jan. 20. Since then, South Korea has had 10,331 positive coronavirus cases and 192 deaths. North Korea has never reported a single confirmed case. But it did report sealing off borders and quarantining hundreds of foreigners in capital Pyongyang in late January while the epidemic was claiming many lives in China and in neighboring Southeast Asian nations. Media reports suggest North Korea has placed up to 10,000 citizens under isolation, with some 500 still under quarantine. Radio Free Asia reported that North Korea had canceled important cultural events and set up a quarantine center in a large Pyongyang hotel.  A North Korean expert told the BBC it was likely there were coronavirus cases but unlikely a mass outbreak had occurred.

Bruce Klingner of the Heritage Foundation, an American conservative think tank, views the seven missile launches and several large military exercises in March as a warning to opponents "not to take advantage" of the Covid-19 situation. Experts on North Korea such as Susan Thornton, former US acting assistant secretary of state for East Asian and Pacific affairs, believe the country was trying to put on a brave face with its false claims. "They likely want to dispel publicly to foreigners any notion that they are distracted or weakened by Covid cases," Thornton told Radio Free Asia. Choi Jung-hun said he had heard "there are many deaths in North Korea" but no one has confirmed that coronavirus was the cause. Having declared North Korea free of Covid-19, Pyongyang is getting ready to slowly reopen segments of its 1,400-kilometer border with China, which South Korean analysts termed a premature move. But there is hardly anyone in North Korea who heeds international concern.