Why do most North Korean migrants choose to be Protestant? 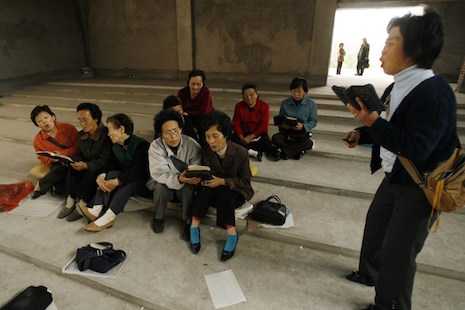 The vast majority of North Korean refugee-migrants living in the south call themselves Christians. Surveys in the mid-2000s showed almost 75 percent of those who make it to South Korea considered themselves converted, almost all to Protestantism.

Seeking solace, morality and new social networks with South Koreans — and even cash subsidies from the state — most of those who settle south of the demilitarized zone continue to depend on churches.

So why do most of these defectors choose to be Protestant over other denominations and faiths?

The origins of the recent wave of North Korean converts to Protestantism dates back 20 years to the devastating famine that killed an estimated half a million people, perhaps more. Fleeing across the border to China, the first Chinese word tens of thousands of North Koreans learned was "jiaohui," meaning "church."

Most headed for the brightly lit crosses that dot the skyline, particularly in China's ethnic Korean prefecture of Yanbian, which lies just across the Tumen River, the most popular crossing point where the distance between both banks is short and the water shallow.

They went in search of a meal and dry clothes. Some voluntarily entered safe houses where they did not have to worry about their next meal, but rules were strict – Bible study was a requirement every day. Those called to mission in North Korea even returned, secretly taking Bibles to spread the Gospel inside the most closed country in the world, a dangerous endeavor. The penalty is typically detention in a high-security labor camp from where few return, or worse.

Among those that stay in China, some remain for years working or studying, particularly in Yanji, the main city in Yanbian. Others move on to bigger cities and often head for Mongolia or Southeast Asia to defect via South Korean embassies.

The percentage of North Koreans who convert to Christianity once they flee has dropped sharply since the famine, from about 85 percent in the late 1990s to less than 75 percent by the mid-2000s, and even lower today.

Chinese police have exerted greater control over missionary activities along the border and some have even faced arrest and deportation. Increasing numbers are also reaching South Korea without missionary help, further eroding evangelism.

As more have defected, greater numbers have been able to afford to bring family members over to South Korea with the help of brokers, most of whom are in it for the money, not the mission. Still, of the missionaries that continue to operate on the Chinese side of the border, almost all are Protestant.

Upon arrival in South Korea, North Koreans are sent to the Central Joint Interrogation Center, where authorities verify they are not a spy or Korean-Chinese. Then each defector must pass through Hanawon resettlement center, where they receive instruction on how to live in the bustling, capitalist south. Here Protestant, Catholic and Buddhist religious services are also offered.

Some observers and North Korean refugees often note — with cynicism — that newcomers in Hanawon typically prefer Protestants to other religious groups because of the quality of snacks and gifts distributed at the end of each Sunday service. Protestants have invested more time and money compared to other religious groups in a bid to reach new arrivals.

After three months in Hanawon, defectors receive South Korean identity cards and are then resettled in low-income housing. From then on, they are expected to adjust to the South Korean way of life, including its hypercompetitive school system and job market. After the state, it's the Protestant Church that offers the greatest benefits to these newcomers.

Many North Korean converts attend church for moral reasons and solidarity, and genuinely appreciate frequent contact with sympathetic deacons. But the intensity of South Korean induction into church care systems scares no small number of defectors.

Reminders of the north

For some, troubling similarities exist between church worship activities and the adulation enforced inside North Korea in the name of the ruling Kim dynasty. Instead of the Bible, North Koreans must study Kim Il-sung's "Juche" philosophy, and religious testimony and confession can seem like the self-criticism sessions every North Korean faces at home.

Some converts become disappointed when they encounter discrimination by "superficial believers," those who are just in it for the benefits, or when they realize regular praying has made little impact on the deprivation and persecution inside North Korea.

Many then claim a leadership role evangelizing to other North Koreans as opposed to staying second-class beneficiaries of welfare in the south. The Protestant Church, much less centrally organized, has always been far better set up for such a task compared to the Catholic Church.

Catholicism is much less visible among North Koreans once they reach the south.

Overall, Protestants still outnumber Catholics by nearly two to one, a ratio that is much more skewed among North Koreans living south of the demilitarized zone. A recent survey showed just 1 percent of defectors regularly attend a Catholic church even if the vast majority appear satisfied with what is a less aggressive evangelism.

So what can the Catholic Church learn from their more successful Protestant counterparts, at least in terms of evangelization numbers?

The Catholic Bishops' Conference of Korea runs the Committee for the Reconciliation of the Korean People, which offers nationwide support for defectors. The church should therefore recruit North Korean laypeople to lead regional committees with support from South Korean clergy, catechists and other laypeople.

Also, each regional committee should campaign for South Korean Catholics to learn the culture of their northern counterparts beyond superficial biases including the "red complex," a fear of northern communists.

In short, understanding North Koreans as people offers a better solution than wooing them with gifts.

Like anyone, North Koreans tend to observe and follow what people do in practice rather than trust what they say. It's an approach that also helps create what most Koreans dream of: a cultural contact zone creating a small-scale reunification between north and south.

Jung Jin-Heon is coordinator of the Seoul Lab, a Korea think tank at the Max Planck Institute for the Study of Religious and Ethnic Diversity, and author of the book "Migration and Religion in East Asia: North Korean Migrants' Evangelical Encounters" published in September by Palgrave MacMillan.