People attack the convoy of Bangladesh's main opposition leader Khaleda Zia, on April 20, 2015 in Dhaka, as part of her electoral campaign as candidate running in mayoral polls due to take place in the capital later this month. (Photo by AFP)

A rally of 19 minority rights' groups in Bangladesh has condemned "ethnic cleansing" of Rohingya Muslims in Myanmar.

The rally also called for protection of minorities in Bangladesh, particularly Buddhists, amid rising anger against Buddhist-majority Myanmar.

The mass gathering was held in the capital, Dhaka, on Sept. 14.

By some estimates, more than 400,000 Rohingya have fled Myanmar's Rakhine State as refugees since a new round of ethnic violence flared in late August.

Islamic radicals have reportedly threatened to avenge persecution of Rohingya, prompting the Bangladesh government to beef-up security in the Buddhist-majority areas of Cox's Bazar and Chittagong. 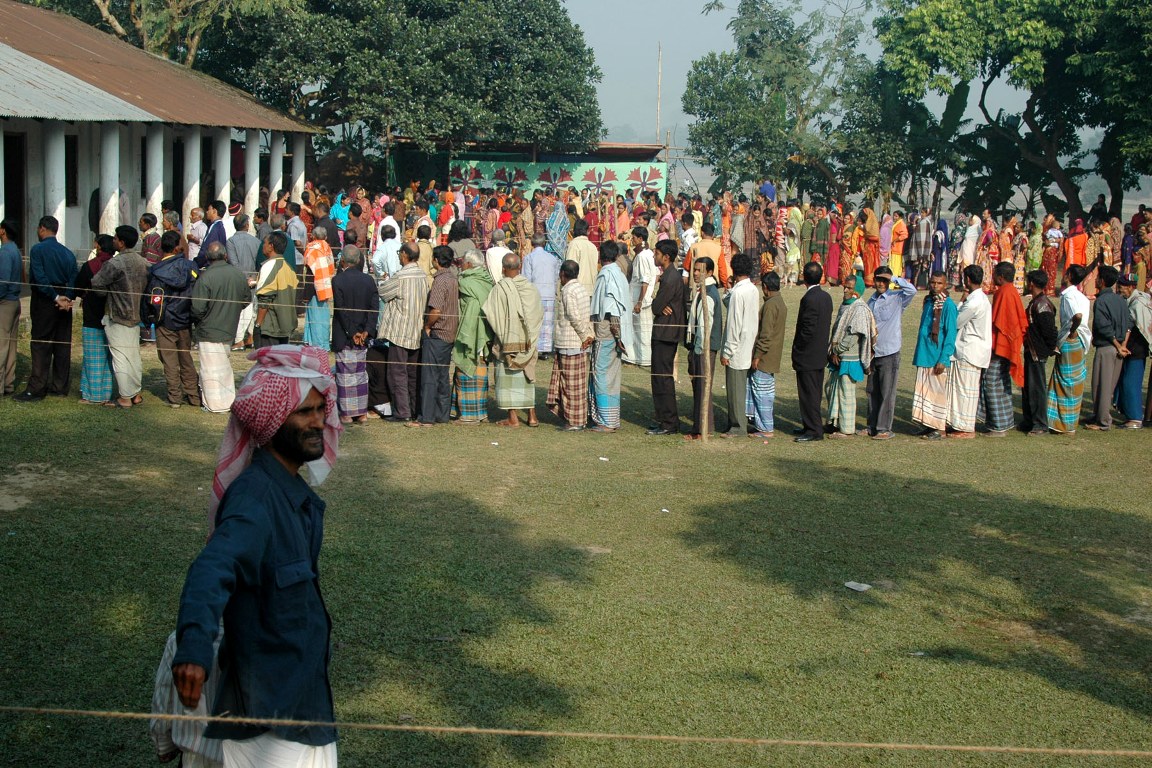 Memories of anti-Buddhist violence in those areas in 2012 haunt local Buddhists.

On Sept. 30 of that year, 19 temples and more than 100 houses were set ablaze, though there were no deaths.

The government tried to save face by arresting hundreds of alleged attackers and rebuilt the destroyed sites within a year.

Apparently, a doctored image of a burnt Quran, allegedly posted by a Buddhist youth on Facebook, inflamed the riots.

In reality, it was a premeditated revenge attack following sectarian violence against Rohingya in Myanmar in June 2012.

Radical Islamists were blamed, but later political motives were evident as the perpetrators belonged to the ruling Awami League, opposition Bangladesh Nationalist Party (BNP) and the radical Jamaat-e-Islami party.

To date, none of the perpetrators have been bought to justice, heightening Buddhists fears.

A call by minority leaders for political empowerment has relevancy given national elections due next year and the political dimension to anti-minority violence.

Among reforms being sought are a minority protection law, 60 reserved parliamentary seats, a minority ministry, a fast-track court to deal with violence and a separate land commission to resolve land disputes between minorities and dominant Muslims.

From 'enemy of the state' to scapegoats for land and politics

There has been a spike in Islamist militant attacks on minority communities in recent years, with land grabbing and politicking significant factors.

Religious and ethnic minorities account for about 10 percent of the 160 million population of Muslim-majority Bangladesh. Hindus make up eight percent and the rest adhere to various faiths, including Buddhism and Christianity.

In 1947, British colonists partitioned India along religious lines and Muslim-majority East Bengal (now Bangladesh) joined Pakistan with some 33 percent of the population belonging to a minority. Today, they have dropped to 10 per cent.

The shrinking of minorities, especially Hindus, is a result of multi-pronged repression by state and non-state actors.

From 1947-71, the Pakistani government considered Hindus to be 'Indian agents' due to animosity towards Hindu-majority India. Moreover, they were blamed for plotting to split the country.

During the 1965 war against India, Pakistan passed a law that branded as 'enemies of the state' Hindus and other minorities who fled to India to save their lives. The law allowed the state to confiscate their land and property.

The law — as well as torture, rapes and killings — forced many people, notably Hindus, to leave Pakistan.

Independent Bangladesh renamed this land law the 'Vested Property Law,' which existed until 2001.

Consequently, seizure of minority properties and related violence by the state and non-state actors continued.

Some 16 years after it was repealed, some victims still struggle to get back their properties but many of them have lost hope. This law was blamed for large-scale migration of Hindus to India.

As they overwhelmingly support the avowedly secular Awami League, their vote is "king-maker" in a number of constituencies.

Thus, the main opposition and center-right BNP and its Islamist ally, Jamaat, consider them to be perpetual enemies.

During national and local elections, an anti-Awami League mindset fuels violence against minorities.

The worst violence followed the 2001 election, which BNP and their Jamaat alliance won. Their supporters unleashed a months-long reign of terror, which included killings, rapes and destruction of homes.

Returning to power in 2008, the Awami League probed the violence, but the report was not made public and its recommendations were never implemented.

A new wave of violence has engulfed minorities since 2013, when war crimes courts, set up by Awami League, started convicting Islamist politicians, mostly from Jamaat and the BNP. Death penalties, as well life sentences, were imposed for 1971 war crimes.

Angry Islamists, in turn, attacked and killed Hindus to challenge the ruling party and its traditional backer, India.

During a controversial 2014 election boycott, minorities came under a series of attacks — from the BNP and Jamaat supporters — for turning up to vote.

The Awami League is not clean either.

Last year, in Brahmanbaria district, Islamic radicals vandalized Hindu temples and houses, in a way that was not unlike the anti-Buddhist violence of 2012.

But that resulted from a feud within the Awami League.

Minorities faced various levels of persecution during all regimes in Bangladesh, military and civilian, and it continues today. Too little has been done to empower them socially and politically, despite their vital contribution to the country's independence and nation building.

Except Islamic parties, major parties have minority representatives, but they are often more interested in safeguarding self and party interests than their communities.

Renewed calls for empowerment are likely to fall on deaf ears. Thus, minorities will continue to be treated like chess pawns by feuding political rivals vying for power at any cost.

Rock Ronald Rozario is a journalist for ucanews.com based in Dhaka.