Why an African pope would probably suit conservatives

From the Christian Science Monitor, March 13 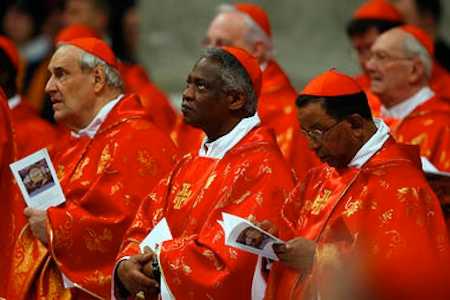 Is Africa ready for an African pope?

CNN recently put that question to 20,000 Africans in 11 countries.

While it’s hard to imagine a western news outlet asking Americans if they felt the United States was ready for an American pope, CNN reported Tuesday that 82 percent of the Africans they polled via cellphone felt that Africa was ready for a pope from the region, while 62 percent rated the Vatican itself as “ready for an African pope.” And 86 percent of respondents believed that an African pope would increase support for Catholicism in Africa.

These are bland answers to bland questions, but luckily they’re not the only views we have to gauge the continent’s reaction to the papal selection process, which began behind the Sistine Chapel’s closed doors Tuesday.

Almost since the moment that Joseph Ratzinger – known by his papal name Benedict XVI – announced he would resign on Feb. 11, a wide variety of Africans have weighed in on the possibility of an African successor and the future of the church on the continent.

And those speculations aren’t simply important for African Catholics. With the western church beleaguered by dwindling attendance and clergy sex abuse scandals, the African church is growing at a clip of 4 percent per year. There are now 186 million African Catholics – triple the number 30 years ago, and Catholics from Latin America and Africa now make up nearly half the church’s adherents worldwide.

As the New York Times reports,

With 16 percent of the world’s Catholics now living in Africa, the church’s future, many say, is here…. While the number of priests in North America and Europe declined [in the last seven years], in Africa they grew by 16 percent. The seminaries, clerical officials here say, are bursting with candidates, and African priests are being sent to take over churches in former colonial powers.

So could the next pope be African?

“Why not?” said Ghanaian Cardinal Peter Turkson, considered a leading contender for the position, nonchalantly in a 2009 interview. “If God would wish to see a black man … as Pope, thanks be to God!'”

In a similarly diplomatic statement, South African Cardinal Wilfrid Napier, also seen as an outside shot for the role, has said that an African pope would be a “great honor.”

"I think we would have a better chance of getting someone outside of the northern hemisphere this time, because there are some really promising cardinals from other parts of the world," Cardinal Napier said in a press interview. "It's a question of where is the kind of [and] the quality of leadership evident at the moment: coming from a growing background rather than a holding or a maintenance background?"

Elsewhere, however, African observers who aren’t actually in the running for the papacy have been less measured in their opinions.

"With the black community's representation in the larger Catholic community, it is legitimate that we have a black pope," said Rene Legre Hokou, who runs the League of Human Rights in Ivory Coast, in an interview with Uganda’s Daily Monitor. "An African pope could give more vitality to the Catholic Church in the black world. It would demonstrate the universal character of the religion.”

But some on the continent have also made the point that an African pope may not signal the radical departure from tradition that it seems. For one thing, there have been popes from Africa before, albeit more than a millennium ago. And while individual African church leaders like Turkson have taken a critical stance towards western institutions like the International Monetary Fund (IMF), by and large the church in Africa is characterized by deep social conservatism.

Indeed, some 50 percent of those CNN surveyed about African pope readiness said they believed an African pope would make the church a more conservative institution. In a freeform comment portion of the survey, many respondents weighed in on what an African pope might do for the church’s barometer on social issues.

"The Catholic Church will be ultra conservative with an African pope," said one Nigerian woman.

"It would spread the faith with stringent Catholic doctrines," a Ugandan man responded….

As one Nigerian bishop put it, for many African Catholics the issue is not so much if the next pope himself is an African, but rather what he does to safeguard the church's traditions on the continent.

Many in the world "would wish a Pope that will support abortion, contraceptives, the culture of death, women ordination, and gay marriages," said Nigerian Cardinal Anthony J.V. Obinna. "The Pope we need to get will be the one that continues in the noble, holy, truthful tradition that Christ bequeathed to us."

Original story: Why an African pope might not signal change of course for the church